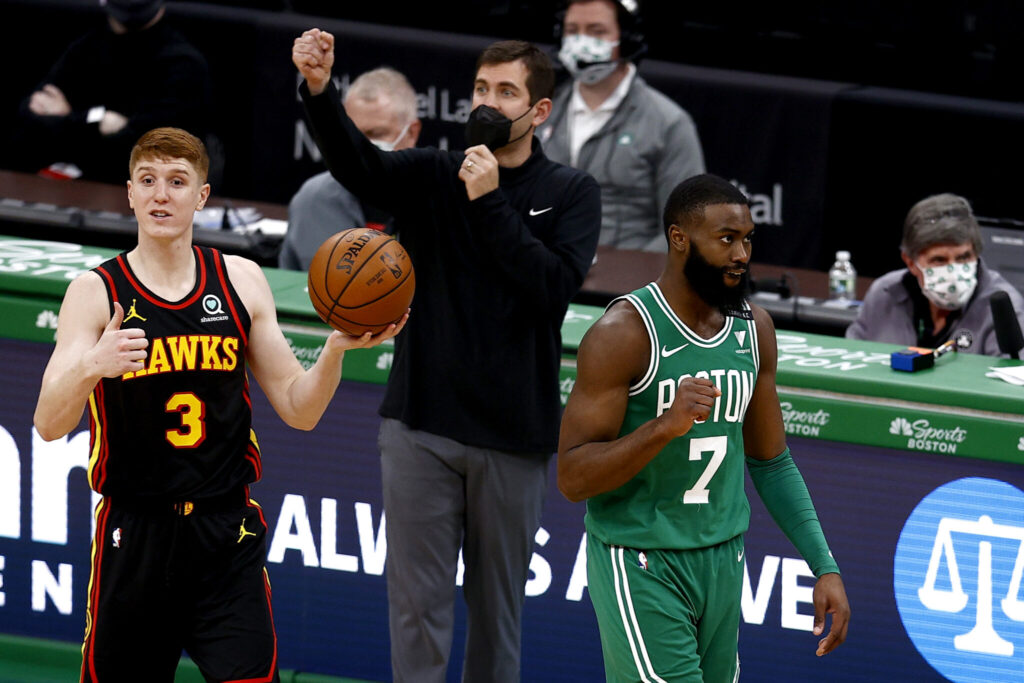 BOSTON, MASSACHUSETTS - FEBRUARY 17: Kevin Huerter #3 of the Atlanta Hawks an d Jaylen Brown #7 of the Boston Celtics react after a foul was called against the Hawks during the second half at TD Garden on February 17, 2021 in Boston, Massachusetts. The Hawks defeat the Celtics 122-114. NOTE TO USER: User expressly acknowledges and agrees that, by downloading and or using this photograph, User is consenting to the terms and conditions of the Getty Images License Agreement. (Photo by Maddie Meyer/Getty Images)
Share
Facebook Twitter Email

The Celtics did not start a point guard against the Hawks on Thursday. Brad Stevens tried his 16th different starting unit in 28 games, playing four wings and Tristan Thompson, with Javonte Green starting for Kemba Walker.

Stevens fixated on slowing Trae Young with Payton Pritchard and switchable wings later, then reached to the back of the bench for Jeff Teague. In crunch time, Boston courted Teague, Semi Ojeleye, Jayson Tatum, Jaylen Brown and Thompson.

The Teague-Hawks connection became one of an assortment of Stevens criteria for who makes the rotation on a given night. Rare practices. Matchups. Feel. Of course, numbers.

This season, due to injuries and inconsistency, everyone is involved. Aaron Nesmith goes from weeks on the bench to a front-line role. Teague received zero minutes on Tuesday, and in the first half on Wednesday, then appeared in crunch time during the loss to the Hawks. A third quarter stint already didn’t go well, and the fourth-quarter adjustment dragged on too long.

Even if Teague could solidify the defense, his third quarter stint led to a missed three and turnover in five minutes, individually, as the Celtics trailed. Brown and Tatum produced 10 points hitting each other and big men with passes.

Clint Capela scored twice through Teague without any resistance, once in a pick-and-roll and another in transition as Thompson tried to catch up. Thompson later called plays like those ones that guards and forwards need to step up on.

“Part of that was the matchup,” Stevens said. “They were targeting Payton (Pritchard) a little bit. I thought Jeff was as good as anyone we had guarding Trae Young in the pick-and-roll. Payton wouldn’t have lasted long with those five fouls.”

We’ll never know. Pritchard left the game with 8:11 after hitting two jumpers to keep Boston within six points. Tatum had turned the ball over to Skylar Mays into a breakout that Nesmith and Pritchard stopped with a collision at the net. Bodies flew everywhere, and Pritchard picked up his fifth foul.

Young adeptly targeted every Celtics defender on switches. There were no other options if Stevens knew Tremont Waters and Carsen Edwards couldn’t handle this game. There’s also been no doubt left that Teague has little-to-nothing left to offer either. Stevens made that clear when he didn’t start him with Kemba Walker down. If Teague was a Young deterrent, why didn’t his play earlier and at least stagger some fouls?

That became Teague’s job in the fourth, setting up hack-a-Capela for two possessions, then ended after Teague-led offensive sets sputtered after Capela’s 2-of-4 trips to the free throw line.

Danny Ainge admitted the team he delivered is not a championship one after the loss on 98.5 The Sports Hub, Boston’s 11th loss in 17 games. The decisions Stevens makes with that group determine outcomes, though, and for the first time all season he seemed uncertain where to turn down three starters.

The Hawks’ lead expanded from five to 13 with Teague in the game as he traveled, threw a pass right to Kevin Huerter and missed a shot in the lane. The deflating stretch dragged on for four minutes and cut the legs out from under a comeback attempt that Tatum powered to within four points with 13 seconds remaining.

Young proved too quick in the first half for Celtics wings like Brown to stay in front of and the game turned into a foul fest, Boston picking up 27 personals. Tatum’s minutes stopped at 35 with the Celtics wisely unwilling to push to 40 amid seven games in 10 days, but can’t afford to give him a night off given their standing position and Walker’s ongoing management.

Tatum mentioned breathing concerns after his stats dipped in 11 straight games returning from COVID. Stevens worried about his burden too, though he and the medical staff haven’t opted for rest proactively. Tatum could’ve sat against Atlanta, Brown could’ve led the offense alongside Teague and the result would’ve been the same.

So a nightly rotation shifts between prioritizing 13 minutes of Tatum rest, experimentation and adjustments. All three failed on Wednesday as Danny Ainge watched alongside Mike Zarren on the sideline until the final minutes of the fourth quarter.

“Our roster obviously is not good. I mean, we are a 14-14 team. There’s no if’s, and’s or but’s about it. That’s who we are,” Ainge said on 98.5. “This is Danny Ainge to blame. This is not Brad Stevens. It’s not Jayson Tatum or Jaylen Brown. It’s like not good enough right now. And we all know that.”

Stevens shouldn’t be fired before the Celtics fix the roster, because Ainge is right. Boston left its coach with an empty hole where Gordon Hayward used to be (traded player exception) and the need to sit Walker during every back-to-back in a condensed season. COVID, too, is something no coach can handle after it afflicted Tatum and created a new rotational wrinkle. Boston started 8-3 before Tatum tested positive.

There’s enough evidence, nonetheless, to know Teague provides nothing to this team short-term, or long-term. His contract will be the easiest to move on from when Ainge makes adjustments.

Keeping the entire roster involved has been a Stevens strength in the past. This year, with a roster of young matchup role players, when those pairings don’t work, the night becomes an unbalanced chase to find what works.

That’s a recipe for inconsistency, regardless of whose fault it is. See: a 14-14 record.