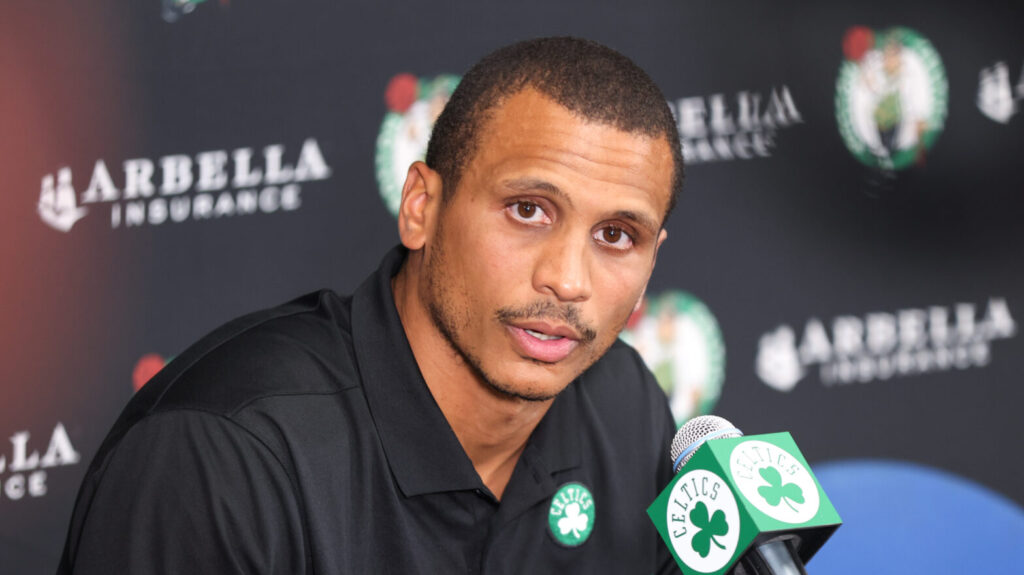 CANTON — Celtics interim head coach Joe Mazzulla spoke openly about the impact of his past legal troubles on Monday, admitting to his mistakes that have helped him evolve as a person, an assistant coach, and now, the newly-appointed leader of the 2022-23 Celtics.

Mazzulla, 34, was arrested for underage drinking and aggravated assault in 2008. Then, the following year, the West Virginia point guard was arrested on charges of domestic battery, according to ESPN. Mazzulla allegedly grabbed a woman by the neck at a local bar in Morgantown, W.VA., which came to light shortly after Ime Udoka’s suspension last week.

“I’ve made mistakes; I’m not perfect,” Mazzulla said Monday at Celtics Media Day. “I’ve hurt people, and I’ve had to use the situations I put myself in as a younger man. I’ve had to use it to learn from and become a better person. That’s what I’ve tried to focus on. How can I recreate my identity as a person? How can I rely on my faith, and how can I just have a positive impact on the people around me? And, I’ve always had good people around me.”

Still, Boston’s new young and inexperienced interim head coach says his past transgressions led to finding his true identity, which molded him into the man he is today.

“I’m not the same person as I was, and I think as you grow as a person, you’re constantly having to build an identity,” Mazzulla added. “I didn’t have an identity at a certain point of my life, for whatever reason. And I think it’s how I can develop an identity. How can I find a foundation, and then how can I impact people positively around me? And that’s something that I really learned throughout my life.”

Stevens and the Celtics organization hope Mazzulla’s positive impact will transcend last season’s improbable finish. Last year’s historic transformation from a below .500 team in December to NBA Eastern Conference champions was accredited to Udoka for his discipline and call for accountability amongst his players, while Mazzulla took notice from the second row of the bench.

But now, Mazzulla’s moved from the backseat of the Celtics coaching staff, and he’ll be the one calling the shots as Celtics training camp kicks off at the Auerbach Center practice facility on Tuesday.

“You’re never really ready,” Mazzulla said. “I’ve been a head coach before, and what I’ve learned from year one to year two, from that standpoint, was that I wasn’t ready. And, it’s not because I didn’t work at it, it’s not because I didn’t prepare, it’s because there are certain things you have to learn on the job. So, year two was much different than year one for me, and I’m really able to pull from those experiences. So, I think it’s more about just pulling from those experiences. I’ve worked with a lot of head coaches and played for great head coaches. I think it’s about taking a formula of what worked for those guys and how I can make it into making these players better.”

For Joe, “healing” is currently at the forefront. The news of Udoka’s one-year suspension, which at the end of the season Boston will determine its head coach’s fate with the team, seemingly shocked Celtics players to their cores.

All-Star Jayson Tatum revealed finding out about it via Twitter. Jaylen Brown “wish we had more details,” and Marcus Smart defended Celtics’ suspended head coach by offering his support, stating, “I still love Ime, as a person, as a coach.”

“Regardless of what has happened, we have a great roster, and we have a great opportunity,” Mazzulla added. “I think that’s what I have to focus on to get this team to where it needs to go.”

As Mazzulla moves into uncharted waters as Celtics head coach, he understands the importance of getting the absolute best from his players, not just as individuals but as a cohesive unit attempting to build off of losing Game 6 in the 2022 NBA Finals.

“If I want the Celtics to be successful, if I want our players to be successful, I shouldn’t be focused on what I’m trying to do; it’s what is best for our players,” Mazzulla said. “As much as we can focus on that, my question would be, why do things have to change? It’s only my job to focus on the execution standpoint. How do we execute our togetherness? How do we execute maximizing the potential of our roster? And then, how do we execute our habits on the offensive and defensive end of the floor? That’s where we have to shift our perspective too.”