Joe Mazzulla operated his first Celtics practice much like his predecessor Ime Udoka, save for more wandering. Mazzulla even drove into his assistant's parking spot, a habit he won't change.. 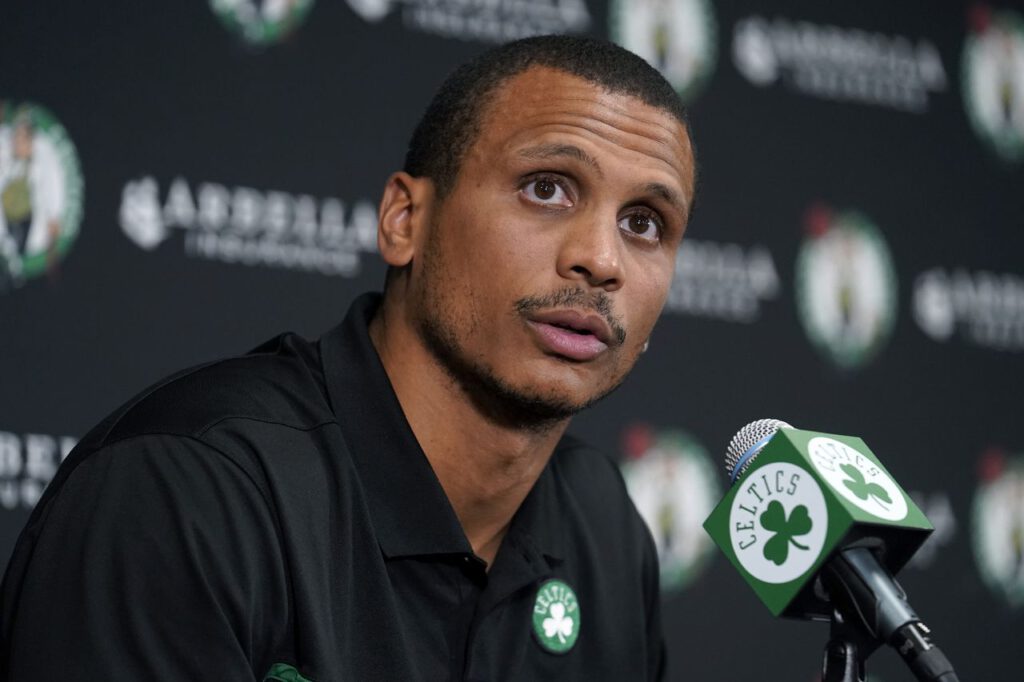 BOSTON — After an ominous media day where Joe Mazzulla and the Celtics listened to their players express confusion and frustration over not knowing why Ime Udoka got suspended for one season, Mazzulla arrived to a different scene on Tuesday morning. One he wasn’t sure he’d see right away — eagerness.

Mazzulla pulled into his same Auerbach Center parking spot he owned as a Celtics assistant with the same minivan he won’t be trading in following his promotion.

The Celtics don’t want much to change following Udoka’s suspension, whether offensive and defensive concepts or terminology, as Mazzulla tries to ease the transition. Boston, its staff and players built a formula for success last season they don’t want to alter and it allowed the team to pivot to basketball smoothly after one of the most turbulent weeks of everybody’s career in the building.

“Normally you have guys coming into training camp, depending on the year, they might not know the plays,” Grant Williams said. “Guys came in and knew the entire playbook. Guys came ready to start going at defensive concepts from the beginning. It was one of those things where everybody was attentive and everybody was ready. You could tell that everybody’s ready to go out there and play our first game. We could probably go out there right now and compete at a high level.”

The switch-heavy scheme on defense that baffled the Celtics last year at this time is now second nature and was the key to a NBA Finals run. The offense relied on pace and heavy ball movement through Jayson Tatum and Jaylen Brown. Udoka also favored size across his lineups, allowing his stars to play on the wing and big men to bang down low.

In practice, Mazzulla bounced from station to station more than Udoka did. Otherwise it became hard to notice a difference. Players didn’t notice Mazzulla’s demeanor, Al Horford said, over an intense hour despite the abbreviated time spent playing. Marcus Smart’s vocal presence in the room caught both Williams and Horford’s attention.

“The structure was the same, the time was the same, the template of the drills was the same,” Mazzulla said. “As much as these guys can be comfortable, it’s going to help us. I tried to end today’s (practice) just being on the court. That’s something I miss. That’s something that I wanted to be able to do. There are moments where I’m walking around like, what am I supposed to be doing right now? But for the most part I love being out there with the guys and they’re great guys. That’s where I find my joy and that’s where I want them to get theirs.”

Players, including Smart, favored continuity that Mazzulla and Udoka’s assistants could provide. Even Brad Stevens, many of the player’s former head coach, operated in a different system with his own staff. Stevens taking over would’ve represented a larger change than the leap to the youngest coach in the NBA alongside Will Hardy, who left the Celtics to coach the Jazz. Assistant Ben Sullivan took over one-on-one work with Derrick White, while Damon Stoudamire continued to work alongside Smart on his point guard duties.

Mazzulla won’t have Robert Williams III for 8-12 weeks and called the injury a great opportunity rather than a difficulty for the team’s depth bigs. A young group of bigs including Mfiondu Kabengele and Noah Vonleh energized practice, Horford emphasizing the front court’s need to prove itself, while Luke Kornet joined Horford and the starters in Williams III’s place at the end of practice for a session on their own court. Malcolm Brogdon and Grant spent that moment on their pick-and-roll timing on the opposite side.

“When you have a group of guys that are familiar with each other, who can be vocal with each other, that can challenge one another, that’s very effective for the ultimate goal,” Williams said. “Malcolm did a great job of communicating … we all did our part. It’s just a matter of carrying that throughout the entire week so that we show we’re truly engaged. (Smart) was just attentive. You could tell his presence was here, on the switches and our different coverages. You saw how loud he was communicating, you knew he was here today and that’s something, as a leader, you love to see, because sometimes a leader can come in and can take the first day kind of lightly. He came in with great intensity from the jump. Credit to him and credit to everybody here.”

Mazzulla knew he’d need to prioritize patience, healing, trust and stability in taking over the Celtics on the fly. He’s not forcing any players to do anything they aren’t ready for in the aftermath of a trying week for the group, but everyone was ready to get back to practice. All 18 training camp players participated except for Williams III and Danilo Gallinari. Returning to the floor seemed to have its own ability to take everyone’s mind off Udoka’s suspension for a moment.

This group learned what it required to win last season from him. Horford saw Brown and Tatum emerge as vocal leaders, saying on Tuesday that Tatum didn’t get enough credit for how he challenged the team during the postseason. In Udoka fashion, Mazzulla delivered his own challenge to the team to conclude his first day on the job, one Horford accepted by warning opposing teams who overlook them due to their chaotic offseason.