Celtics players found out about Ime Udoka's suspension on Twitter and were clearly left frustrated by a lack of transparency regarding his future. 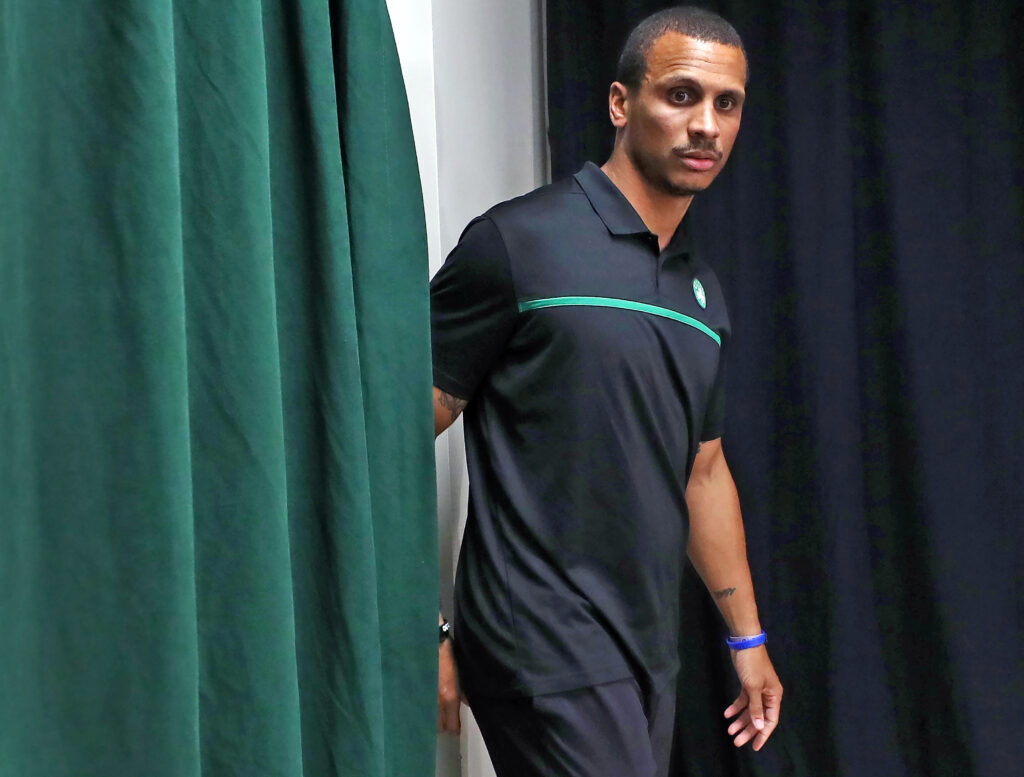 09-26-22: Canton, MA: Joe Mazzulla comes out from behind a green curtain as he heads for the microphone to take questions from the media for the first time as Interim Head Coach of the Boston Celtics. The Boston Celtics held their annual Media Day at High Output in Canton. (Jim Davis/Globe Staff)
Share
Facebook Twitter Email

Jayson Tatum found out the Celtics were considering a significant suspension for head coach Ime Udoka the same way everyone else did. On Twitter.

Tatum and his teammates expressed shock, confusion and occasional frustration over why Udoka won’t be coaching the team this season at Monday’s media day. It marked the first moment players reacted to the news of multiple unspecified alleged violations of team policy by Udoka, a silence explained by the player’s own lack of awareness of the process and decision. Players seemed genuinely sympathetic to questions, because they wanted to know more too.

Interim head coach Joe Mazzulla opened the afternoon emphasizing his job will be helping the team heal and instilling trust between management and the players, which Brad Stevens and Wyc Grousbeck already acknowledged won’t be easy last week. It could be this team’s greatest challenge this season and can’t be rushed.

“It’s been hell for us,” Marcus Smart said. “Nobody really knows anything, so we’re just in the wind just like everybody else. The last couple of days have just been confusing.”

While everyone acknowledged the privacy concerns preventing the team from sharing details of Udoka’s behavior, the lack of transparency even internally fueled an emotional week for a group that bonded with its head coach last season on the way to the NBA Finals. Udoka had visited Smart in LA over the summer and players remained in contact with players as if he was coaching until the conclusion of the investigation this week. Mazzulla confirmed he reached out to Udoka, among others, ahead of the start of training camp this week.

Stevens and Mazzulla both expect to make themselves available to everyone in the organization during a difficult time. Some players appeared shaken on a normally jubilant, optimistic day that also included Robert Williams III looking forward at a long recovery from left knee surgery. Others leaned into a focus on basketball after a small team meeting last week that didn’t reveal much beyond the details available to the public. They’ll try their best to return to basketball on Tuesday knowing they haven’t fully processed the story.

“Like I said, (we’ll) get back to what we know how to do best and that’s play basketball,” Tatum said. “It’s not as simple as that, but that’s kind of our mindset. Obviously, there’s a lot going on, but the thing we can control is playing basketball and getting ready for practice tomorrow.”

Mazzulla drew endorsements across the roster and felt like the right choice given the team’s need to rally around the staff in place from last season. He mentioned the need to do what’s best for the players, and that did not involve bringing in an outside coach. Another credit to group’s desire for continuity. Boston had a game plan from last season Mazzulla intends to follow.

That won’t solve the human factor at play in this locker room. Even Mazzulla’s own staff members were Udoka hires, many of them friends.

The questions linger: did Udoka’s actions warrant such a punishment? Why wasn’t more information shared and how could this entire process have been streamlined better? This was no longer a media inquiry or a topic of celebrity gossip or desire to know the private details of Udoka’s life, it was about that trust Mazzulla mentioned. Players didn’t know how to feel about their coach, the team’s internal policies and the report, which Grousbeck asserted was handled consistently with past cases. They’ve only started to digest all of that, like us.

“I wish we had more details,” Brown said. “From what we know, it’s hard to make a decision about whether or not it’s consensual or not in the workplace, or whatever’s going on. We’ve known that’s happened before in the workplace, but I guess there’s more to it possibly. Which we don’t know. I don’t know. I don’t have all the details. It’s not being shared with me. So it’s hard to really comment on something when you’re not filled in with all the details.”

Grant Williams, Malcolm Brogdon and Al Horford leaned into leadership positions, expressing more faith in the organization and emphasizing their roles needing to step up through the coaching transition. Williams  gave the organization some credit for how it handled a difficult moment. Brogdon noted the inevitability of change through the many coaching changes he experienced in Indiana alone. Horford hoped the talented roster can pivot toward building their defensive and offensive fundamentals back and not dwell.

Some expressed the continued admiration they have for Udoka and the job he did coaching the team. Nobody seemed betrayed by him personally, despite the difficult position he’s put everyone in entering a critical season. The players had his support though, and without knowing what he did had no reason to withdraw it on Monday.

“We’re human. When things are uncertain, that’s when you start to feel all kinds of feelings, because you don’t know. You want to make sure you get all the facts before you know, but like I said, from what we do know, the organization has handled it the right way … we’d still like to know, just for the simple fact that it did happened so fast.”