Playing Josh Richardson in crunch time didn't lead to a Celtics win, but opened some intriguing possibilities for the Celtics offense going forward. 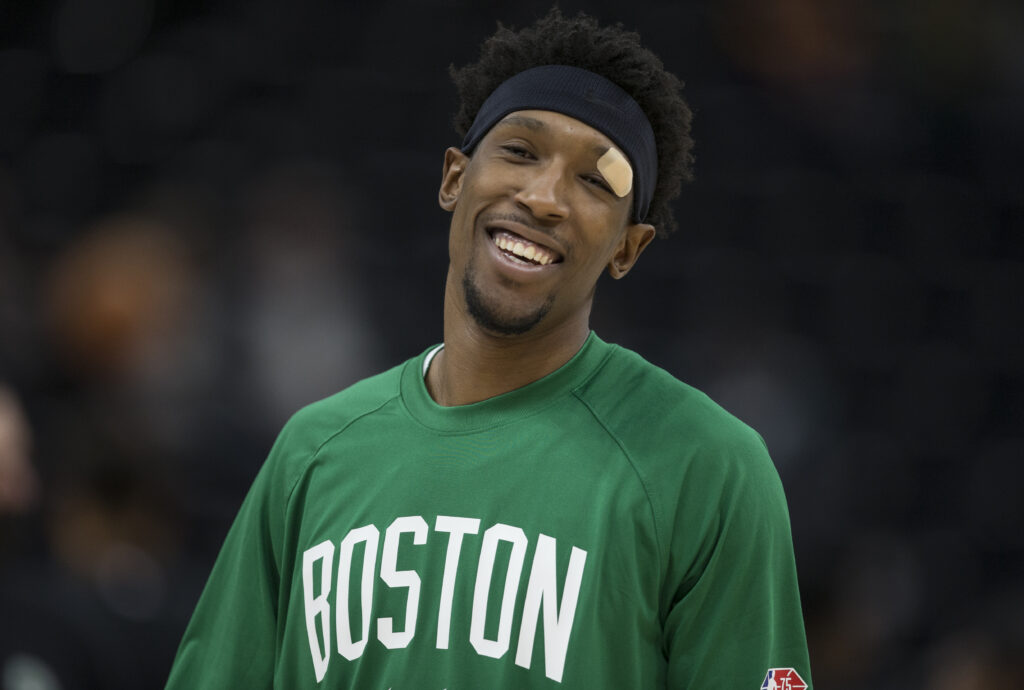 SALT LAKE CITY, UT - DECEMBER 3: Josh Richardson #8 of the Boston Celtics smiles during warmups before their game against the Utah Jazz on December 3, 2021 at the Vivint Smart Home Arena in Salt Lake City, Utah. NOTE TO USER: User expressly acknowledges and agrees that, by downloading and/or using this Photograph, user is consenting to the terms and conditions of the Getty Images License Agreement. (Photo by Chris Gardner/Getty Images)
Share
Facebook Twitter Email

Josh Richardson arrived in Utah with the bandaid still above his left eye, covering four stitches from when he drew too close to Tobias Harris defensively on Wednesday. Richardson tried to stick his nose into the play and caught an inadvertent elbow as Harris drove downhill away from him. If the Celtics can fully hone their defensive identity this season, he’s on his way to becoming a fan favorite.

“It didn’t really hurt,” Richardson said at shootaround on Friday. “It wasn’t my first time being hit in the face. It is what it is. When I was walking back, I told them ‘just stitch me up, glue me up, whatever you gotta do and I’m going back.’ The doctor was like, ‘yeah, we got to tell them to prepare for you not to come back.’ I was like ‘no, no, no. I’m going back. It’s just a matter of when.'”

Richardson obliged and returned with 10:21 remaining in the fourth on Wednesday, finding Grant Williams with an extra pass for three then hitting an eight-footer in the lane himself to tie the game at 69. He played 20 minutes in that 88-87 win over the 76ers, scoring seven points on 3-of-7 shooting. The Celts stifled Philadelphia and inched closer toward the team they can become.

Then, during Friday’s 137-130 Celtics loss to the Jazz, Richardson joined Boston’s closing lineup in place of Robert Williams III, alongside Al Horford, Jayson Tatum, Dennis Schröder and Marcus Smart, with Ime Udoka in search of spacing against Rudy Gobert. It didn’t work — defensively.

Donovan Mitchell piled up points on Horford switches and Utah scorched to 12-of-22 shooting in the fourth. Richardson started the final frame hot, then disappeared late as Schröder and Tatum turned toward isolation. Still, the Celtics managed to keep pace almost the whole against a historic offensive performance way by converting 10 of their final 21 and drawing nine free throws.

“Missed block outs, back doors. Little things. We also missed execution, when a guy goes, we were caught in-between,” Mitchell said afterward on Utah’s defense. “Especially the bigs, because Al Horford was shooting the hell out of the ball.”

Richardson’s no Seth Curry, but it’s telling that Udoka saw spacing opportunity in the average career shooter. Richardson now sits close to his career mark at 34% from three on 53 attempts. It’s an upgrade over Boston’s 32.9% three-point shooting as a team and having five ball-handlers made the Celtics difficult to defend.

Threes haven’t been Richardson’s focus anyway. Thanks to flexibility from Udoka, he often steps closer to the rim for two-point jumpers. He challenged Rudy Gobert, dribbling at him and drilling an elbow jumper in his face late in the game.

Boston aimed to pull Gobert to the perimeter with ball-handlers starring as shooters. Richardson fits both roles, if his 15-footers qualify as spacing today. He’s converting 58.6% of his mid-rangers, ranking third in the NBA among players with at least 29 attempts, behind Jrue Holiday and LaMarcus Aldridge

He also tossed a shot put style lob into the hoop from the post area and finished a layup at the rim, alongside a three, to shoot 4-for-8. Richardson’s become a subtle, needed scoring force off the bench.

“Steady play, a presence off the bench where we know we’ll get something consistent there,” Udoka told CLNS Media. “Other than the flu and his knees and all that, games he’s missed here or there, he’s been playing well when he’s played. He’s a veteran that’s been there, done that and gives us some flexibility to do different things. But even himself, and I think he’d say, he didn’t come in ready to defend in that first quarter, as well as the rest of our guys, and I think that hurt us.”

Later in the first, the Jazz turnovers started flowing and it opened up Richardson and others in transition. He grabbed a bad Rudy Gay pass and ran it home for the dunk. After Smart picked up his second of four first-half steals, he fed Richardson in transition, who passed out of an open three into Romeo Langford for a another slam. Smart and Richardson proved disruptive enough to roll with.

Richardson’s play style is uncharacteristic and malleable, a good fit for Udoka. They flamed out together in Philadelphia, then Richardson did again in Dallas. He got traded in back-to-back offseasons, the Mavericks effectively sending him to Boston as a salary dump, with the Celtics looking for a wing via trade exception after losing Evan Fournier. Brad Stevens then extended Richardson an extra year to maintain a base of medium salaries for flexibility.

He’s not a traditional Stevens player, a mediocre three shooter in recent years and not a primary point guard. The Celtics hoped for something of a shooting renaissance that hasn’t come, although he’s improved over his stationary role next to Luka Doncic.

His ability to fill in for Jaylen Brown’s secondary ball-handling role made him more valuable recently, along with his tenacious guarding and size that fits Boston’s switching scheme and the team’s defensive identity. Richardson averaged 10.3 PPG on 48% shooting since November began.

“I like to play (on the ball),” he said last month. “If we look back at my history in the league, I think I’ve been effective off ball-screens, handoffs and just being able to get back to that a little has been good.

The Celtics only need him to do those things in spots, unlike the 76ers and Mavs who leaned on his as a primary ball-handler. In Boston, Richardson can cut off other creators like Schröder and Smart. He’s able to create his own shot, an important second-unit attribute, and even though his numbers and game don’t scream efficiency, this team will take points wherever they can find them.

“A good shot is a good shot,” Udoka told CLNS  on Friday.

That was the case early in the fourth on Friday. He drew free throws, drilled a three and hit his mid-ranger in the opening minutes to keep Boston within a possession, then took a 104-103 lead. Udoka decided to stay with him out of timeout down by five, and his steal the next play set up Smart’s three the next possession.

His cut following a Celtics transition run freed up Robert Williams III to put back his ensuing miss inside. Richardson simply finds his way to scoring positions and, for now, his mid-ranger (1.17) is a rare one that produces more points than his threes (1.02).

The adjustment Udoka made into the second half bolstered Boston’s offense and he rode it to the Celtics’ best offensive game by far all season. Progress overshadowed a loss, as Horford lauded the closing lineup’s ability to play versatilely on both ends. The Celtics finished the game 51.6% from the field and 36% from three, hanging with a team making threes at as consistently as any team did before.

Richardson scrapping together some buckets and moving the ball as part of that effort, against a top-tier Jazz defensive unit, might unlock some possibilities for Udoka moving forward. The trio of guards posted a +43.5 net rating over 38 minutes with Tatum and Williams III, with an offensive rating over 130. Romeo Langford playing with Smart, Richardson, Tatum and Horford rated +32.8 over 21 minutes.

“I think this game kind of showed us the potential of some of the things we can do,” Horford said. “There was times we were switching one through five in the fourth. Other times we started playing back a little bit, that hurt us, we started giving up some lobs to Gobert. In general, with all the different lineups, it shows how versatile we can be with this group that we have, and be effective.”