Kadlick: Matt Corral Is Going to Be a Franchise Quarterback in the NFL For Years to Come

The Ole Miss product is poised to make waves in the big leagues. 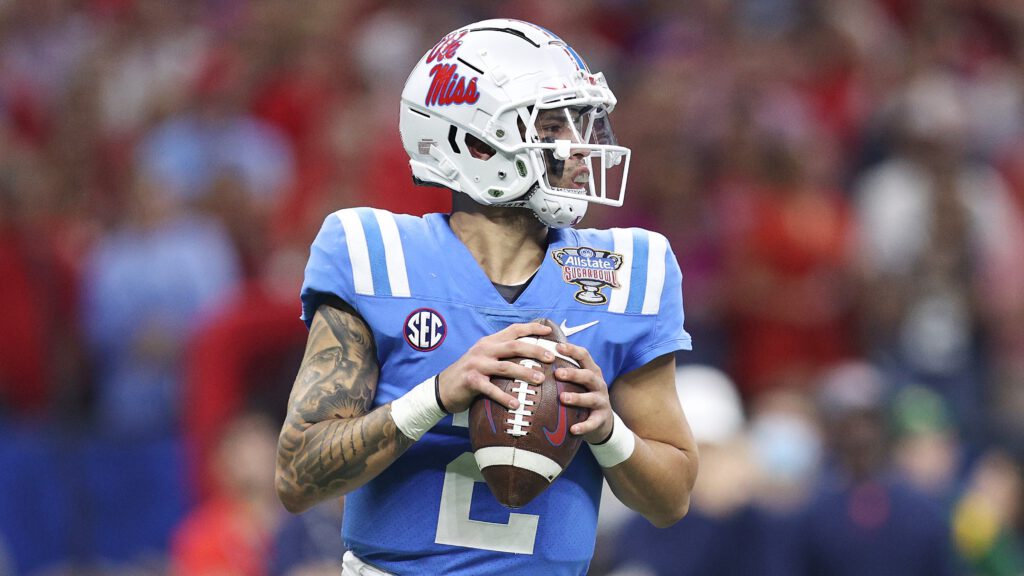 As we move past the NFL Draft and get into minicamps, both rookies and veterans are doing their part to get themselves acclimated and prepared for the 2022 season.

This is especially true for the rookie quarterbacks – who are trying to learn an entirely new offense, galvanize both a franchise and a city, and – ultimately – win a starting job.

According to BetOnline.ag, former Ole Miss signal caller Matt Corral is the rookie quarterback (outside of Kenny Pickett) with the best chance to start the most games for their team in 2022. Here are their odds:

Last offseason, I wrote for a blog for Guy Boston Sports asking the question of when Mac Jones will play for the Patriots.

More often than not, teams try to let their rookie QB’s to sit back and take in the system, but they end up throwing them into the fire sooner than planned:

The narrative with rookie quarterbacks, outside of the phenoms who step in week one, is that they will redshirt for their entire rookie season and just learn from the guys in the room. However, this rarely plays out in practice. A few recent examples:

The belief with this years quarterback class is that Trevor Lawrence and Zach Wilson will step in right away, while Trey Lance and Justin Fields are considered projects. The wildcard is Mac Jones.

Jones, of course, beat Cam Newton out during training camp and became New England’s starter for week one and beyond.

I can see Matt Corral taking a similar path during Panthers camp.

The QB ahead of him is Sam Darnold, who certainly has had his ups and downs during his NFL career. Once considered a prodigy coming out of USC, Darnold struggled with the Jets before being traded to Carolina when New York decided to move forward with Zach Wilson.

According to reports, the Panthers thought Matt Corral had the best tape among the rookie QB’s, but off the field issues were what made him slide to the third round. I mean, just look at this throw:

There’s no doubt that Corral can play in this league. Barring Carolina trading for Baker Mayfield or Jimmy Garoppolo, I expect him to beat out Darnold and be the Panthers starting QB for week one.

The play: Matt Corral (-150) to start more games than Desmond Ridder, Malik Willis, and Sam Howell is an easy bet to lay the juice on.

Keep it here with us on CLNS Media as the NFL offseason continues to move forward. Our Patriots beat reporter Evan Lazar will be on the beat all summer long, and I may make an appearance or two as well. Stay tuned?.