Lazar: Why Would Bill Belichick Want To Go Year-To-Year With Tom Brady? 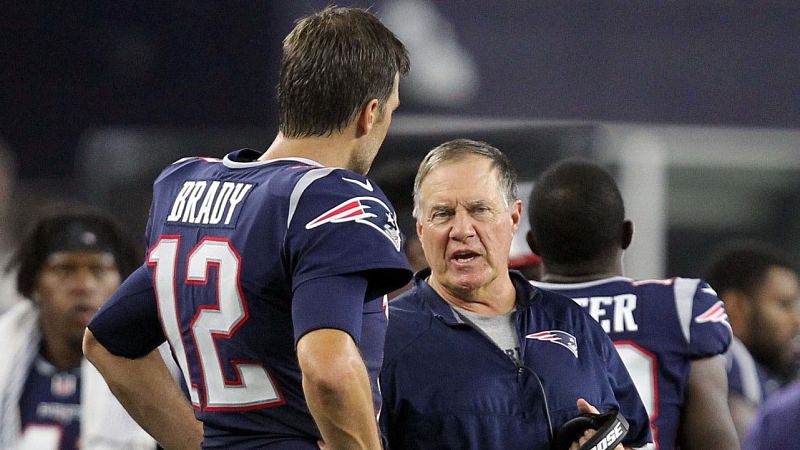 As Tom Brady’s decision to leave the Patriots to join the Tampa Bay Buccaneers sinks in, there’s one major aspect that’s difficult to comprehend.

Why, after unprecedented success and six Super Bowl titles, would Bill Belichick be so set on going year-to-year with Tom Brady?

As a Patriots fan, nobody would blame you for screaming, “just give him what he wants!” at the Patriots head coach.

Despite reports that New England would’ve done a similar deal to match the Bucs’ offer, and that the Patriots truly didn’t know what Brady wanted, and weren’t given a chance to make a real offer, we know from years of contract negotiations that those claims don’t add up.

Starting at age 40, the team preferred to go year-to-year with the now 42-year-old quarterback, so two years fully guaranteed would be a heel-turn for Belichick, who rarely changes course.

The Patriots offered Brady a two-year, $53 million contract last summer. Although the contract terms are unknown, the consensus is that the second year was not fully guaranteed, which is why Brady rejected the offer.

In the end, Brady wanted a multi-year commitment so that he could finish his career on his terms, which the Pats knew despite spin to the contrary, but Belichick wanted to protect the team against injury or a steep decline in play, which are real possibilities for an aging quarterback.

Tampa Bay was willing to give Brady the job security that the Patriots were reluctant to give in his last three contract negotiations with the team.

Did Belichick, who has a keen eye for moving on from older players, see something that made him wary of going all-in on Brady?

With all due respect to the GOAT, there’s a possibility based on the 2019 season that Belichick has doubts.

Lazar: Patriots Should Be Wary of a Multi-Year Contract For Tom Brady

Before you say it, I’m not bashing Brady on the way out or doing the bidding for the team. In fact, I wrote about being wary of a multi-year deal for the future Hall of Famer when the Pats season ended in January.

There was a noticeable dip in accuracy (made worse by injury), fewer “wow” or big-time throws, and more negative plays as potential warning signs that Brady is not the passer he once was.

Here’s the short version: Brady ranked 26th out of 30 passers in Next Gen’s completion percentage over expectation (-1.2), his “big-time” throws declined in each of the last three seasons, and he committed the second-most turnover worthy plays in a season of his career (17).

If Next Gen’s CPOE metric isn’t your thing, Brady also finished poorly in Pro Football Reference (29th out of 32) and Sports Info Solutions’ (24th out of 32) accuracy charting as well.

My breakdown from January goes into more detail on these numbers and includes film analysis that illustrates some of these issues on tape.

Brady’s lack of weapons was a significant reason why his results-based stats took a downward turn last season.

And he will benefit going from the 24th-ranked receiving corps in cumulative PFF grade to the fourth-best in the Bucs. Brady can still lead an offense without significant holes at a championship level, but he’s now more reliant on his supporting cast.

Brady was far from the only problem last season, but there were also frustrations from both sides with the team’s struggles integrating new receivers into the offense.

There’s plenty of blame to go around for New England’s problems here too, with talent evaluation and coaching near the top of the list.

But unless they were proven stars like Antonio Brown or Josh Gordon, the Patriots hit roadblocks with countless others brought in to bolster the offense over the last few years. The list of receivers that came through New England the previous two-plus seasons exceeds 30.

Brady skipping non-mandatory offseason workouts (OTAs) and having a tight trust tree made it hard on some of the new additions to find their groove, especially the younger players.

We knew these underlying issues were lingering, and Meyers even went on the record in November about the difficulties of gaining Brady’s trust.

“That has probably been one of the toughest things about being here,” Meyers said. “I am going to keep working at it, not give up, and hopefully I keep chipping away each day.”

Although the next quarterback won’t be the greatest of all-time, younger receivers in particular, like Harry, Meyers, or a future draft pick, might have better luck with the next guy.

Marginal upgrades next season from certain areas were possible like Harry, Meyers, or Mohamed Sanu blossoming, but significant improvements from Brady and those around him were wishful thinking.

Unless the Patriots significantly improved Brady’s supporting cast with proven talent, which was difficult due to their salary cap limitations, we could expect a similar product from Brady and the offense in 2020.

During the 2019 season, the Patriots had their worst offensive ranking in Football Outsiders’ defense-adjusted value over average (DVOA) since 2003. The offense wasn’t good enough, leading to an early postseason exit, and continuing the marriage without hitting some home runs this offseason was a futile attempt at another Super Bowl.

These simple truths might not make you feel any better about Brady finishing his career elsewhere after 20 years with the Patriots.

We are all in agreement that it never should’ve gotten to this point. Brady should’ve finished his career with New England, and it’s difficult to fathom still that he will wear another uniform.

But there were reasons for the divorce from both perspectives, and hopefully, we shed some light on Belichick and the Patriots’ thinking.