Lazar: James Develin Was a Great Patriot, But Pats Prepared For Life Without Pro Bowl Fullback 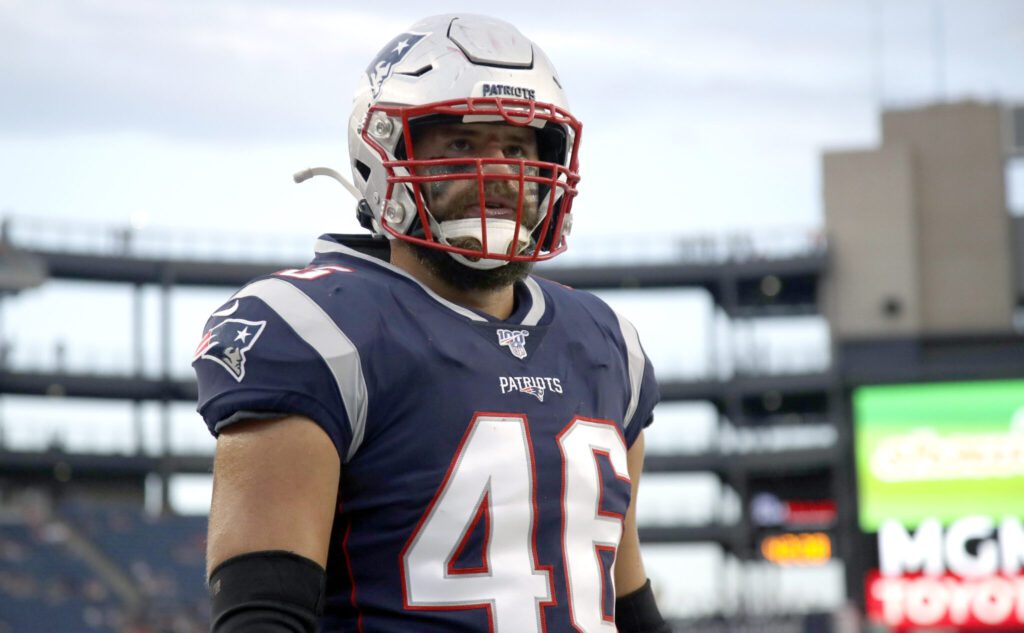 Another longtime Patriot is no longer on the active roster as fullback James Develin is retiring from the NFL, the three-time Super Bowl champion announced on Monday.

Develin took to Instagram to make the announcement, saying complications from a season-ending neck injury a year ago will end his eight-year run in the NFL.

As the guiding light for the Pats running backs, Develin made the Pro Bowl in 2017 and spear-headed a power running game to a Super Bowl in 2018.

With Develin’s usage increasing late in the season, all six of then-rookie Sony Michel’s rushing touchdowns in the postseason came with Develin in the backfield, as did Rex Burkhead’s game-winner against the Kansas City Chiefs in the AFC Championship Game.

On Burkhead’s score, the Pats ran their go-to goal-line play called “BOB,” which stands for “back on backer,” with Develin as the back in the name lighting up the [line]backer to lead the way.

The Patriots also loved running “ISO” with Develin. In this scheme, the Pats double-team at the point of attack and fan out the play-side defensive end, creating a free shot for Develin in the hole to land a sturdy block on the MIKE linebacker and open a running lane for the ball carrier.

Along with the absence of center David Andrews and Rob Gronkowski, Develin’s impact on New England’s rushing attack was loud and clear in 2019, as their run blocking took a significant hit without him in the mix after his season ended in September.

The Patriots ranked 18th in the NFL with a rushing success rate of 48.3 without Develin last season, compared to a 51.0 success rate the year prior, good for 11th in the league.

#Patriots OL coach Dante Scarnecchia said the Pats like to have a fullback in the running game. Had him explain why. Lots to do with being able to double team on the line of scrimmage with the fullback taking the unblocked defender, usually a linebacker. pic.twitter.com/69NpiDhWKF

Bill Belichick and the coaching staff love their fullbacks. Develin’s punishing blocks are part of the reason, as is New England’s desire to make reads easier on their running backs and double-team on the line of scrimmage.

Although Develin will be missed, the Patriots were preparing for life without him for a while.

Last season, New England found a hidden gem in German fullback Jakob Johnson through the NFL’s International Pathway Program. But Johnson’s season also ended abruptly due to a shoulder injury. Still, he was progressing and showing promise in his four games as a rookie.

During free agency, the Pats signed fullback Dan Vitale to a one-year deal. But the breakdown above explains that Vitale is more of a pass-catcher than a bruising lead blocker, which could add a different element to the position for New England moving forward.

And in the draft, New England selected Virginia Tech tight end Dalton Keene, who is listed as a tight end but played plenty of snaps in the backfield as a lead blocker in an H-back role for the Hokies.

Keene projects as a tight end at the next level, but in the clip above, he takes out a linebacker with a bruising lead block, starting in the backfield.

Develin’s career ends under unfortunate circumstances, due to injury, but he leaves a lasting impression on his teammates and coaches.

And from a defensive lineman at Brown University to the United Football League, then the Arena League before signing with the Bengals’ practice squad, he found a home in New England like many longshots.

But the Patriots have three viable options to replace him on the roster, with Johnson as the closest thing to Develin, while Vitale and Keene offer more athletic upside and receiving skills.