Lazar: Outside of Mac Jones, Kellen Mond Checks Most Boxes for Patriots at Quarterback 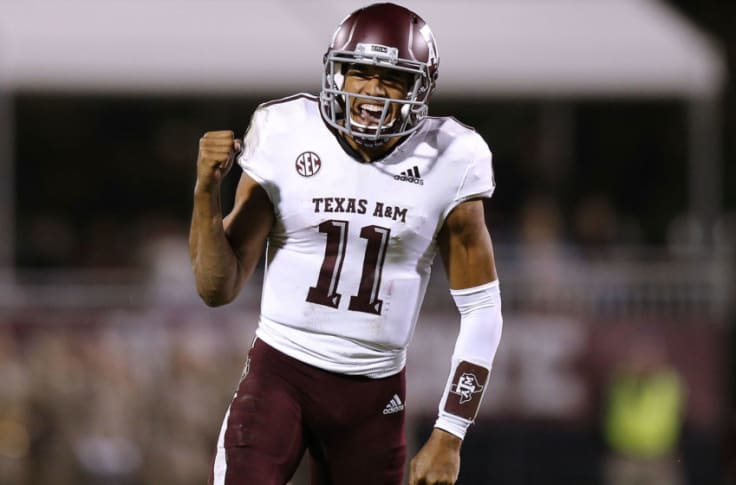 As the Patriots continue their deep-dives into the 2021 quarterback class, there will be several names that you’ll routinely hear as options for New England in the first round.

However, former NFL quarterback turned analyst Chris Simms broke draft twitter on Wednesday when he put Texas A&M quarterback Kellen Mond ahead of Lance and Fields in his rankings.

Simms has a history of correctly evaluating quarterbacks, like when he had Patrick Mahomes as his top prospect in the 2017 draft and Justin Herbert over Tua Tagovailoa last year.

Instead of bashing Simms for his unpopular take, I decided to take a closer look at Mond to see if I understood where Simms was coming from with the A&M product.

Mond is a very thoughtful passer with his ball placement (+3.7 CPOE) and reads, makes decisive decisions (2.61-second time to throw, T-12th in FBS), and is mobile.

Furthermore, I believe that the Patriots will be high on Mond. He was a three-year starter with significantly more game experience than the other options, has NFL QB size (6-3, 220 pounds) and arm strength, ran Jimbo Fisher’s pro-style system in the SEC, and was MVP of the Senior Bowl; for New England, that’s checking most of their boxes.

Also, keep in mind that the last five quarterbacks drafted by Belichick were multi-year starters, so experience matters here, which might rule out a one-year starter like Lance, for example.

The knocks on Mond are that he didn’t improve dramatically at any point during his collegiate career and rarely attacked downfield with only 12 big-time throws in 2020, per PFF.

In other words, Mond doesn’t make the “wow” plays that get you excited about a prospect. But like every talented quarterback, he has the tools to succeed if he gets the proper support.

Mond made good decisions within A&M’s scheme, got the ball out on-time with a quick release, and has good poise in the pocket, which are traits often associated with the Patriots.

I wouldn’t go as far as Simms, but Mond is my QB6 behind the consensus top-five QBs in the draft, ahead of Kyle Trask, and there are rumblings that the Patriots like the depth in this class.

If the Patriots miss out on or don’t love the top five quarterbacks, Mond is my top choice on day two of the draft for New England.

Here’s an example of what it means for a quarterback to be thoughtful with his ball placement, which Mond usually is, especially to the middle of the field. The defense falls into two-deep coverage opening the middle of the field. Mond has a glance route or skinny post paired with a curl to his right. When the underneath defender jumps the curl, he has a window to the skinny post behind it. Mond smartly accounts for the opposite underneath defender and throws the ball to the receivers’ back shoulder to avoid a potential turnover or big hit over the middle.

There were several throws where Mond properly threw away from the coverage, placing the ball in spots where his receivers won’t run into issues.

On this completion, Mond throws with anticipation to hit the dig route before the deep safety closes on his receiver. The play-action fake holds the underneath defender to create the passing lane, and when the deep safety over the top of the slot receivers stays back, Mond rips it in there.

Mond also threw receivers away from coverage while attacking the sidelines. This time, A&M runs four verticals against a cover-three structure, and Mond gets a two-on-one to the left side. Instead of leading his receiver upfield into coverage, Mond floats one to a spot along the sideline into the pocket of space between the two zone defenders.

Although PFF’s accuracy charting metrics aren’t too keen on Mond (53.4% accurate), you can tell that he understands where to place the ball relative to the coverage.

Another advanced area of Mond’s game is his ability to cycle through multiple options in a progression and decipher coverages post-snap to distribute the football to the open receiver.

In this audio breakdown, the defense drops into a cover-four shell which puts the zone defenders in a good position to defend a smash concept (corner/curl) in Mond’s primary read. Mond works to the backside of his progression, and with the coverage moving with his eyes to the quarterback’s right, he hits the tight end up the seam for a big gain.

Next, this audio breakdown explains Mond’s post-snap processing skills. With a post-wheel combination putting the boundary corner in conflict, Mond reads the outside corner carrying the post route and throws the wheel into the vacated area for six.

Lastly, Texas A&M often put Mond in the quick passing game, especially on first down and third-and-manageable. This time, Mond sees the coverage defender on the line of scrimmage pointing his hips towards the quarterback and throws the speed out to move the sticks on third down.

The biggest reason why draft analysts aren’t higher on Kellen Mond is that his tape lacks the “wow” throws that we routinely see from the top quarterbacks in a respective class.

Mond doesn’t create on the run like Lance or drop deep-ball dimes like Wilson or Fields. In comparison to Mac Jones, his accuracy in the pocket wasn’t up to par, so he’s branded a mid-round pick.

Due to the lack of big-time plays, Mond’s steadiness game-to-game gets overlooked in favor of flashier prospects, and in some cases, guys that bring substantially more arm talent to the table.

However, Mond was in complete control of Jimbo Fisher’s offense by his third season in the scheme, a pro-style system that gives you plenty of Patriots-like reads and throws to study, making for an easier projection. Plus, his throwing motion is consistent.

Mond isn’t a statue either, adding a dual-threat element where he might not be Lamar Jackson or Cam Newton as a runner but can make the defense pay on scrambles and zone-read designs.

Patriots fans likely want Bill Belichick to think bigger at the quarterback position, and who can blame them after what we saw last season following Tom Brady’s departure.

Kellen Mond might not be the answer Patriots fans want in the draft, but outside of Mac Jones, he’s undeniable the prospect that checks the most boxes for New England in the 2021 class.