Lazar: the Patriots Are Who We Thought They Were in the Passing Game

The Patriots need to make up for a lack of deep passes with top-notch execution. 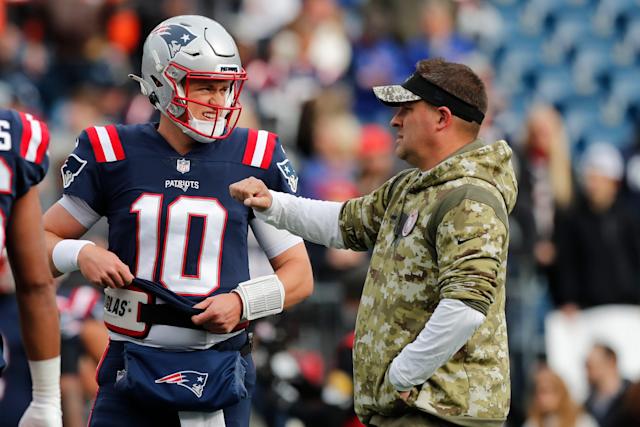 The Patriots’ passing offense is exactly what we thought it would be 11 games in the 2021 season.

After the Pats’ loss to the Bucs in Week 4, we wrote about New England’s offense needing to thrive on short and intermediate passes in the absence of big plays.

Patriots quarterback Mac Jones (accuracy+quick processing), the system in place under offensive coordinator Josh McDaniels, and the weaponry around Mac doesn’t lend itself to a deep passing attack. And that’s okay.

As we said after Week 4, we’ve seen this style of offense work in the past in New England. Last Sunday’s blowout victory over the Browns was a glimpse into this offense’s ceiling with Mac attacking tight windows downfield and a strong running game supplementing the passing game.

However, the Patriots’ 19-point performance against a defense allowing an average of 29.2 points in the Atlanta Falcons points to their limitations; if the situational execution (third down, red zone) isn’t top-notch, the offense is prone to stalling.

Thursday night’s win over the Falcons was a microcosm of their season offensively when things don’t go as well. It was a short week against a veteran defensive coordinator in Dean Pees, which is context that gives them some leeway. But the Pats kicked four field goals, stalling four times inside the Atlanta 30-yard line (1-for-3 in the red zone, 4-for-12 on third down).

A big part of the reason why the Patriots are league-average at finishing drives in the end zone is that they’re running the seventh-most plays per drive (6.2) due to the lack of big plays, making them more vulnerable to negative plays (sacks, penalties, turnovers, unsuccessful plays, etc.). 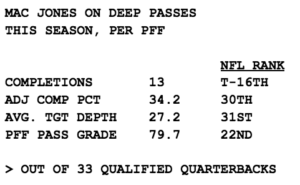 Out of 33 qualified quarterbacks, quarterback Mac Jones ranks 30th in adjusted completion percentage on passes of 20-plus yards (13-of-38). Furthermore, Jones has only three completions of 30-plus yards this season (3-of-16, two turnover-worthy plays), and his longest throw is just 36 air yards (to Nelson Agholor vs. Chargers).

Although Jones isn’t a high-volume deep passer, the Pats have the third-most 20-plus yard passing plays this season with 41, which is confusing. If Mac isn’t hitting deep throws, how are they producing so many explosive passing plays? 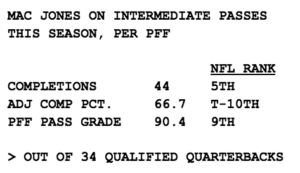 But here’s the catch: on the Patriots’ 41 explosive passing plays, they’re averaging just 28.0 yards per play, 26th in the NFL. In other words, the Patriots are biting off chunks, but they aren’t a “big play” offense.

The Patriots’ offense needs to be on top of the details because they can’t make up for it with one or two gigantic gains. As the competition and stakes ramp up over the next few months, New England needs peak execution to get through Tennessee, Buffalo, Indy, then Buffalo again. Are they for real? We’ll find out.

Let’s get into a few examples of the Patriots passing offense’s somewhat thin margin for error from Thursday night’s win over the Falcons:

One of the keys for any passing offense that isn’t a high-volume deep passing attack is maximizing opportunities.

“I think just nailing the opportunity when it’s there, and there’s been times I’ve missed that, and I can definitely do a better job of that consistently,” Jones told CLNS Media last week on the topic. 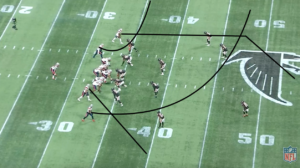 Here’s one play that exemplifies maximizing downfield opportunities. The Patriots are running a Yankee concept with Nelson Agholor on the deep post and Jakobi Meyers on a crosser against an inverted cover-two coverage.

The Pats get exactly what they want. Agholor’s deep post takes the deep hole defender and half-field safety upfield, and Meyers is wide open on the crosser. However, possibly because of a little push from the interior pass rush, Jones comes off his downfield read and checks it down. On the one hand, tight end Jonnu Smith breaks a tackle and gains 17 yards. But on the other hand, a much bigger play was there. 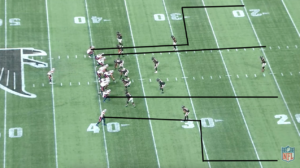 On Jones’s third-quarter interception, the Pats ran play-action out of 22-personnel to flood the single-high look with four vertical routes.

As we roll it, Jones stares down the left sideline to come back right, moving the post-safety away from Jonnu Smith’s seam route. But Falcons corner A.J. Terrell is on to him and jumps Smith’s route. Mac had two choices here: 1. Settle for the check down to an open Damien Harris or 2. Hit N’Keal Harry on the outside double move. Although it looks like an obvious read to hit a wide-open Harry, Mac expects Harry’s route to hold Terrell on the deep third. Ideally, Mac would take an extra half-second to recognize Terrell jumped Jonnu’s route and progress to Harry for a big play. But it’s a tough ask and a good pick by Terrell. Ultimately, it was a rushed decision that Mac will learn from while reviewing the tape.

The Patriots produce a small handful of downfield shots per game, so Jones needs to take advantage when they’re there.

BEING ON THE SAME PAGE/ROUTE CONVERSIONS

For as many new pieces as they have, Jones often sees things the same way as his receivers. Still, there’s always room for improvement, and Mac’s lone incompletion in the first half was a good example of that.

Mac throws tight end Hunter Henry open to the back pylon against a two-high safety structure. However, Henry breaks his route off towards the front pylon, and the pass falls incomplete on third down (field goal). Although it’s impossible to know for sure, Mac appears to read the coverage correctly and takes a shot into the cover-two hole where Henry has leverage on the deep safety, but Henry ran his route into coverage.

The Patriots were only one-for-three in the red zone on Thursday night, and mental lapses were the main issue.

Speaking of mental breakdowns, here’s another missed opportunity in the red zone. 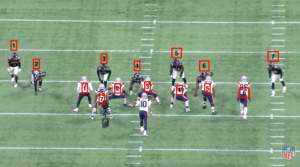 This time, it’s a protection breakdown against a blitz by the Falcons. Atlanta puts seven rushers near the line of scrimmage, and Mac correctly keeps both the tight end and running back in the protection, giving the Pats seven blockers to account for the seven potential rushers.

However, the Pats slid the protection to Jones’s right instead of blocking the Falcons straight up. As a result, there’s an unblocked blitzer coming off the left side. Due to the slide, safety Erik Harris (#23) is Jones’s guy if he blitzes. In other words, Jones is hot, and Mac seems aware of it after he glances at Harris rushing at the snap. Mac’s answer is an out to Kendrick Bourne in the right slot, but the Falcons ran a trap coverage on an inverted cover-two scheme. With the slot defender falling into the deep half, the outside corner squats on the out route. If Jones throws to Bourne, there’s a good chance it’s intercepted, so Mac wisely takes a sack.

The Falcons sacked Mac three times on blitzes, so you hope that doesn’t become a blueprint as it was at the beginning of the season.

If the Titans and Bills try blitzing as Pees did, the Patriots need better awareness and better answers to the test; one of the most impressive aspects in Jones’s development is his ability to correct mistakes.

Although many will read this as trashing Mac Jones and the offense, the Pats are clearly a good offense. They’re 14th in expected points added this season, fourth since Week 4, and first in EPA during their five-game winning streak.

Plus, Jones, as we wrote after their Week 10 win over the Browns, is playing exceptionally well in his rookie season, and they grinded out a “gritty one” on the road on Thursday night against a good defensive coordinator.

However, the stakes for the Patriots are no longer to be good; the Pats have Super Bowl aspirations in a wide-open AFC. To realize their potential, they’ll need to win in the passing game by being a step ahead of the defense and executing at a high level.

The core players can make the necessary fixes and put points on the scoreboard. We’ve seen them do it before, and it’s good to work out the kinks in Week 11 rather than, for example, in Buffalo in two weeks.

Still, the key to avoiding letdowns in a four-game stretch that will define their season is in the details.