Lazar’s 53-Man Roster Projection 1.0: Patriots Have Challenging Cuts Ahead of Them 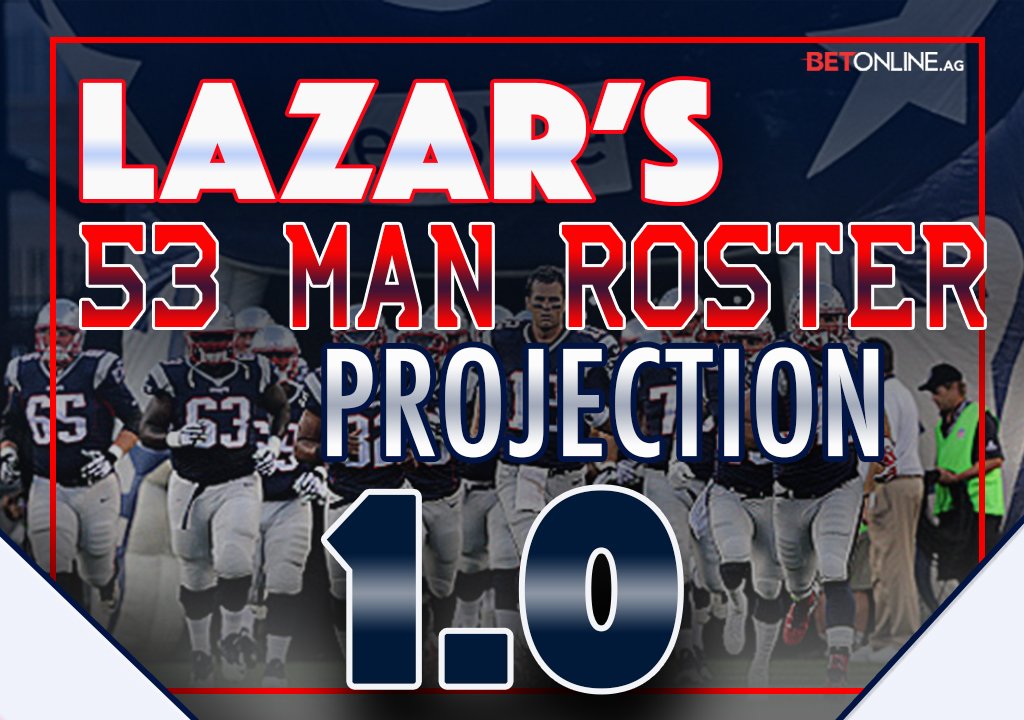 The Patriots have one of the deepest 90-man rosters in the NFL, making this one of the most challenging rosters to predict in recent memory.

For that reason, I don’t envy Bill Belichick’s job at all as he’ll have to make several difficult decisions to get this roster down to 53.

Here’s my initial stab at a Patriots 53-man roster projection after observing just one OTA practice:

Based on Thursday’s practice, Stidham would have to dramatically improve over the next few months to push Brian Hoyer off the roster. Stidham struggled with his timing and knowledge of the system, which is no surprise for a rookie. But there was a noticeable difference in play from Hoyer to Stidham. As a fourth-round pick, the team invested enough in Stidham to keep him on the roster, and it’s unlikely that he’d make it back to the practice squad.

No huge surprises. The Patriots have a loaded and multi-dimensional backfield that figures to be a strength of the team in 2019. If there is a surprise cut or trade, moving on from Rex Burkhead is a possibility, although it seems unlikely given how the team valued him last postseason.

The first two names on the list are locks. Dorsett has the inside track for a top-three spot; his familiarity with the system gives him an advantage over the new acquisitions. As for Harris, after watching practice on Thursday, the Pats seem to have a specialized role in mind for the former Redskins receiver that’s similar to what Cordarrelle Patterson did for them last season. His speed as a ball carrier took me by surprise. Dontrelle Inman is the odd man out. It was difficult to cut a player that I like, but the Patriots can stash wide receiver depth elsewhere to save the roster spot. Demaryius Thomas (PUP/IR), Josh Gordon (suspension), Braxton Berrios (practice squad) and UDFA Jakobi Meyers (practice squad) offer them flexibility.

If either LaCosse or Seferian-Jenkins struggle, don’t rule out the Patriots only carrying two tight ends out of camp with a few first or second-year players stashed on the practice squad. For now, we go with the tight end depth chart that makes the most sense based on past performance.

After the retirement of Jared Veldheer, I fully expect that the Patriots will acquire a veteran offensive tackle to serve as an understudy to Isaiah Wynn. Starting left guard Joe Thuney held down the left tackle spot at practice with Wynn sidelined and can serve as an emergency backup, but ideally, he stays at left guard. Assuming Cajuste is ready, he had quad surgery in March that had a three-month recovery time, he’ll make the roster.

The interior of the Patriots’ offensive line is loaded with three high-level starters and two promising backups. Ted Karras is the odd man out giving way to Froholdt who is younger and under contract for longer. Although there was no contact, Froholdt’s footwork and athleticism were on full display at practice on Thursday.

Shelton rounds out a solid interior defensive line group with two underrated players in Guy and Pennel. Butler didn’t light up the stat sheet last year, but he was at the center of everything the Patriots did up front with their pass rush last season as a focal point of the line games that were so successful (twists, stunts, picks).

Bennett and third-round pick Chase Winovich will help replace the departed Trey Flowers as the Patriots rebounded nicely from losing one of their best defensive players in free agency. The team likes Simon’s intensity and work ethic, but the numbers game could push him off the roster.

Hard to believe how quickly things changed at the linebacker position for the Patriots. A year ago, this position group was seen as a weakness of the team. Now they have depth and a nice collection of skill sets that fit well together; Hightower and Van Noy as on-ball linebackers, Bentley and Roberts as the run stuffers and Collins as the passing down specialist.

The cornerback depth chart is stacked and arguably the best position group on the roster. Due to that depth, a trade from this group to fill a hole elsewhere or even acquire a future draft pick wouldn’t stun me. There’s a ton of positional versatility here with guys like Williams, Jones, McCourty and Dawson as options at safety as well. But carrying six cornerbacks does make it challenging to manage the rest of the roster.

On the surface, it seems unlikely that the Patriots would only carry three safeties. But as mentioned above, some of their corners can play some safety, and some of their special teamers can as well in an emergency. These three, however, are the backbone of the defense.

No team invests more resources in special teams than the Patriots. It’s hard to believe that they’ll carry six special teams only players, but it’ll be somewhere in that range. We need a nickname for this group.

Initially, I had Allen on the roster over Bailey; it’s hard to imagine the team cutting Allen after his excellent performance in the Super Bowl. But then I saw Bailey kick in person.

The Patriots can stash some depth at wide receiver with Thomas recovering from a torn Achilles and Gordon on the commisioners list. Thomas is making good progress, but it’s doubtful that he’ll be ready for the start of the season after tearing his Achilles last December.