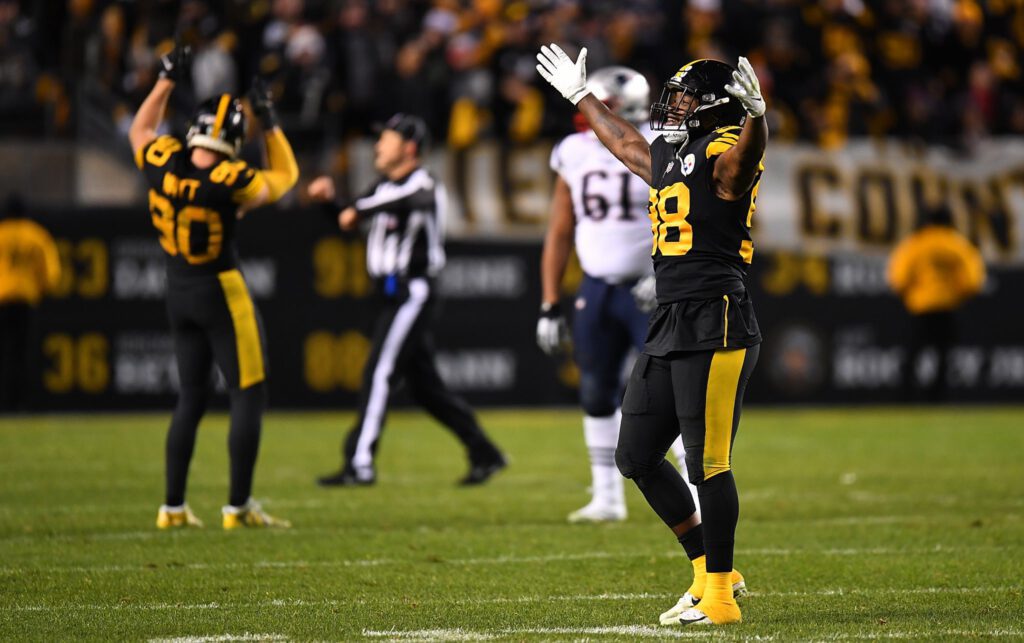 Below are a variety of advanced stats from the Patriots’ 17-10 loss to the Pittsburgh Steelers in Week 15.

As you’d expect, it was a rough day at the office for Patriots quarterback Tom Brady.

Brady did not handle pressure well receiving a horrific 31.1 overall grade under pressure and finished the game with a 21.4 passer rating while under duress.

Furthermore, if you subtract Chris Hogan’s 63-yard touchdown, Brady was 4-12 for 91 yards and an interception on passes of ten or more yards in the air on Sunday, which equates to a passer rating of 26.7.

Also, Brady only attempted four passes outside of the numbers of ten or more yards as the Pats tried to attack the deep middle of the field despite the Steelers defense allocating their resources to shutting that area down.

Although Brady shoulders some of the blame, mainly for his decision making under pressure, it’s hard to fault the Pats quarterback alone for what was an institutional failure on the offensive side of the ball.

When given chances, Brady made the throws, but the Steelers’ defense deserves credit for limiting the Patriots’ receivers on Sunday afternoon.

Here’s a great example of how the Steelers were able to shut down the Patriots’ passing attack.

In critical situations such as third down and red zone, the Steelers doubled both tight end Rob Gronkowski and wide receiver Julian Edelman forcing Brady to go elsewhere with the football. As you see above, the Patriots lined both Edelman and Gronk in the slot next to each other, but both Pittsburgh safeties immediately close on Brady’s top two targets to double them on third and six. Brady is forced to work the matchup to James White against a linebacker along the sideline, and pressure combined with good coverage force an incompletion.

The Steelers’ tight coverage was also made evident by the time Brady spent in the pocket.

On average, Brady’s time to throw was a sluggish 2.81 seconds, which was his slowest release in a game this season.

The Steelers defense took the Patriots offense out of rhythm and didn’t allow Brady to operate at his usual blistering pace.

Believe it or not, Brady was only pressured on 24 percent of his dropbacks against the Steelers.

However, the Patriots’ offensive line struggled to protect Brady in the first half, was called for six penalties on the day, and right tackle Marcus Cannon had one of his worst games in recent memory.

Against Steelers pass rusher T.J. Watt, Cannon allowed five total pressures and was flagged for two penalties including a back-breaking holding call in the red zone late in the game.

Watt’s sack was a great example of how he was able to beat the Pats’ right tackle on Sunday.

Watt went to a simple punch and dip move on Cannon, which allowed the Steelers’ pass rusher to use his speed around the edge to take advantage of the sometimes slow-footed, albeit heavy-handed, Cannon. Watt’s speed rush was too much for Cannon to handle on Sunday.

On a positive note, although he was also called for two penalties, Patriots left tackle Trent Brown had a clean sheet against Pittsburgh and received a 90.6 pass-blocking grade from Pro Football Focus.

As a whole, however, the offensive line had a sloppy day with six killer penalties even if some of them were ticky tack calls.

The Steelers defense was able to shut down Gronk, but Julian Edelman, despite a lousy drop, was able to average 2.4 yards per route run out of the slot.

Based on the eye test, some might think that Edelman’s play is declining, but his 71.1 receiving yards per game would be the second-most in his career (2015), his 1.8 yards per route run out of the slot is around his career average, and his drop rate is at its usual pace as well.

Also, one of the few highlights on the day for the Patriots offense came on a 63-yard touchdown pass to Chris Hogan out of the slot.

The Patriots ran a Yankee concept with Hogan (deep over) and Josh Gordon (post) off of their fly sweep/play-action fake scheme in the backfield. Three players ran with Gordon, and nobody picked up Hogan who had over 19 yards of separation on the play according to NextGen Stats.

The Patriots’ defensive front had a difficult time against a terrific Steelers’ offensive line in Sunday’s loss.

They did manage to pressure Roethlisberger on 33 percent of his drop-backs, but some of their 12 total pressures came on coverage sacks and pressures.

After the game, Patriots defensive lineman Adam Butler and Deatrich Wise told me that the Pittsburgh offensive line did an excellent job of passing off the Pats’ stunts and picking up their blitzes, which made it difficult for them, without help from the scheme, to get to Roethlisberger.

On this second-quarter completion to James Washington, the interior of the Steelers offensive line effortlessly passed off a T/T stunt between Adam Butler and Deatrich Wise which gave Big Ben plenty of time to allow Washington to uncover in the secondary.

On a more positive note, although he had a rough game in run defense, Patriots defensive tackle Lawrence Guy did tally three quarterback pressures and two hits on Roethlisberger.

Here, Guy lines up at defensive end and beats the tackle around the edge to force Roethlisberger into an intentional grounding penalty.

In the running game, as you’d expect, the Patriots’ defensive front struggled on Sunday.

The Steelers offensive line deserves credit, as does this zone “rollback” scheme that gave the New England defense fits. On this scheme, the offensive line uses inside zone blocking, which gets the defense to overcommit in one direction and allows the running back to then cut back off of those blocks with the defense pinned down in the opposite direction. The rollback scheme was a perfect call against the Patriots front that lacks speed and penetrators on the interior of the defensive line (notice Lawrence Guy get pushed back). Once Samuels cuts back, the Patriots defense doesn’t have the speed at the second level to run across the formation with the Steelers running back, and the defensive linemen can’t get off their blocks to slow down the rookie.

Over the last three weeks, the Patriots defense has allowed nearly 7.5 yards per rush.

If you’re looking for a silver lining from the loss, the Patriots’ secondary was ultra-competitive in coverage against the Steelers’ receiving duo of Antonio Brown and JuJu Smith-Schuster.

And Roethlisberger was 9-16 for 73 yards targeting Gilmore and Jackson in coverage.

On this first-quarter sack, you can see how the Patriots covered Pittsburgh’s receivers on the outside. The Pats played most of the game with a post safety in the deep middle of the field and a roamer to support Jackson covering JuJu in the slot. Gilmore played to his post safety by staying on Brown’s outside hip, and Jackson funneled Smith-Schuster into his safety help in the middle of the field. Roethlisberger had nowhere to go and eventually went down for a sack.

In an alternate universe where the Patriots win this game, Jackson likely has the play of the game breaking up a pass in the end zone that Smith-Schuster had in his hands. Jackson continues to display terrific ball skills, and shows them off here as he plays Smith-Schuster’s hands and gets his arm/hand lodged in between JuJu’s arms and chest to pry the ball out as they go to the ground.

Although Jackson needs to work on turning his head and locating the ball on passes to the sideline, he has quickly developed into a plus-player that has earned a top three spot at the cornerback position in the Pats secondary.