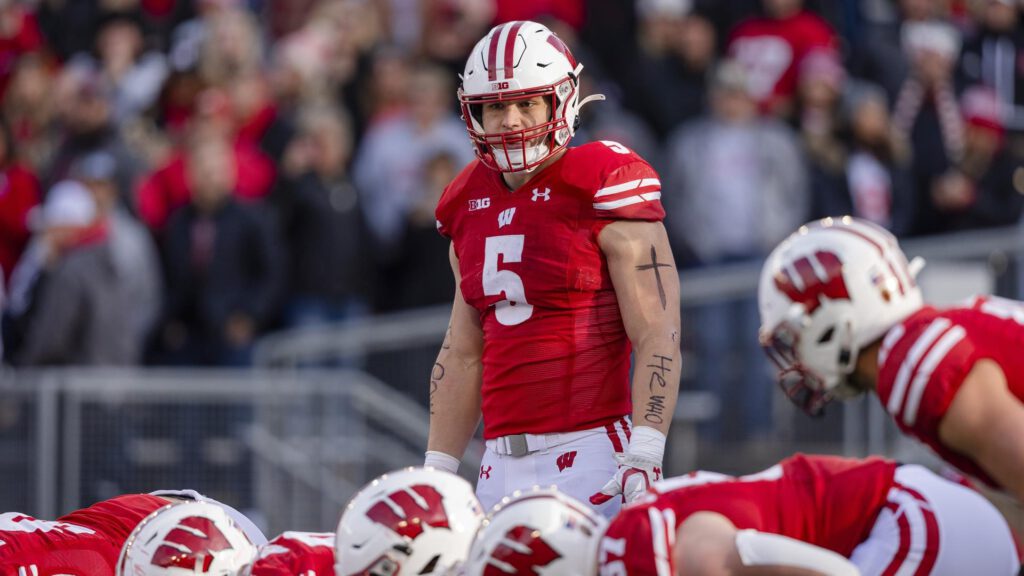 Let’s continue the countdown with our 31-40 tier, which highlights prospects who are projected day two picks:

McCollum is the most athletic cornerback prospect in the history of the NFL Combine. His workout included a 4.33-second 40-yard dash, a 39.5-inch vertical jump, and a blistering 6.48-second three-cone drill (best-ever for a CB). Truly, a superhero playing corner. On tape, McCollum used his tremendous athletic gifts and size to dominate at the FCS level. . McCollum uses his length to crowd the release point while also possessing smooth hip transitions and foot speed to mirror routes. In all, he had 13 career interceptions and six forced fumbles. After accepting an invitation to the Senior Bowl, McCollum feels like this year’s version of Kyle Dugger. It shouldn’t surprise anyone if he’s a day two pick by the Patriots.

Cincinnati LB Darrien Beavers is a need to know name for #Patriots fans:

Hard to find a prospect that checks more boxes for a Belichick-style linebacker. pic.twitter.com/xi4MKQCURq

As the leader in the middle of the Bearcats’ defense, Beavers was a highly-productive enforcer for the CFP semi-finalists last season. He plays an aggressive brand of football with polished instincts, press-and-shed ability, and overall play strength to defeat blockers and tackle ball carriers. On passing downs, Beavers was a force as an interior blitzer and could handle low-stress coverage assignments. Although there was some hip tightness in space on tape, Beavers tested well and held up during Senior Bowl practices in coverage. There’s a nice blend of new-age athleticism with an old-school thumpers mentality.

Although his game is different in some ways, if you want to the #Patriots to draft a Deebo Samuel/converted RB-type, Wan'Dale Robinson is your guy. Jet sweeps, screens, and pretty much any scheme to get the ball in his hands are big plays waiting to happen on every touch. pic.twitter.com/wKWElJeMXF

The best way to describe Robinson’s current skill set is a mini-Deebo Samuel. He’s not as long or compact as Deebo, which could cap his ceiling. But the Kentucky product lined up at both slot receiver and running back (at Nebraska) in his collegiate career. He possesses breakaway speed (4.44s) and potential as a route-runner out of the slot. Robinson instantly accelerates and has excellent contact balance, so Kentucky did everything it could to get the ball in his hands (screens, backfield touches, end around/sweeps). He has no issues creating separation with sudden movements in his route breaks and vertically on slot fades. Ultimately, the team who drafts him needs to have a well-constructed plan to use Robinson properly. His size and limited catch radius could inhibit him as a traditional receiver. Still, the athleticism is there for an impact playmaker.

New England has a history of drafting Bulldog left tackles, so Salyer could be the next in line. Salyer’s size suggests that a move inside to guard is in his future, which many figured would be the case with Isaiah Wynn. He has taken snaps at all five spots along the Georgia offensive line, using a thickly-built frame and stout anchor to handle power rushers. His hands are active, heavy and work independently to stymie pass-rushers, while his footwork into his engagements makes him an above-average run blocker. Salyer is a short-strider with a compact build, meaning he doesn’t have the ideal tools to play tackle. A team like the Patriots might try him at tackle before moving him inside, but he’s a strong candidate to play left guard in New England.

Couple plays that really highlight Montana State LB Troy Andersen's athletic ability: great closing burst, ability to move laterally, and use his length to wrap tackle. His ten out of ten RAS at the combine is evident on film. pic.twitter.com/MnA3GA5XYy

The pre-draft process is all about players such as Andersen rising up the board. When we first caught wind of the Montana State product, projections had him going in the middle of day three. After a superb combine and Senior Bowl circuit, he is now squarely in the round two conversation. Andersen was a three-phase player for the Bobcats, earning All-Conference honors at quarterback, running back, and was the 2021 FCS Defensive Player of the Year at linebacker. Sounds like a Patriot, right? Andersen will play linebacker at the next level, where he moves smoothly all around the field. He’ll ideally play as the “chaser” in a defensive system, where he can fly around in pursuit to mirror running backs, make open-field tackles, and become an impact player in coverage. Andersen covers every blade of grass with all-out effort for four quarters on defense and special teams. He has tremendous potential.

Although we are lower on Smith than the consensus, his standout traits of length and ridiculous hand power certainly are near the top in this class. Smith’s immense grip strength gives him the ability to move defenders wherever he wants them to go in the run game, and good luck going through his chest with power, as his anchor is rock-solid. However, his hand strength and power cover up shortcomings in overall foot speed and range, blocking angles, and pad level issues. Smith’s technique concerns are likely fixable, though, and his power and aggressiveness are starting-caliber traits.

If the Pats are truly going with a positionless secondary, few players bring better instincts, aggressiveness, and field awareness than Pitre. Pitre played the “star” role in Baylor’s defense as a noted team captain and leader, mostly lining up over the slot. He triggers downhill with terrific force to set the edge of the defense, take on ball carriers, and blitz quarterbacks. Pitre plays a far more powerful brand of football than you’d expect for a player of his size. In coverage, he’s scheme versatile and always around the football, playing the game at a different speed than those around him. Pitre can sometimes be a little over-aggressive and doesn’t have the size to play on the outside. But he should develop into an impact player at the next level. Our pro comparison is Cardinals nickel DB Budda Baker.

Cincinnati WR Alec Pierce has my attention. 6-3 X WR prospect on day two. This is one of the best reps/releases I've seen out of this class. From the footwork to clearing his body of contact with his hands to high-pointing downfield. Impressive stuff. #Patriots pic.twitter.com/XkMTyO7hzU

Great size, excellent explosiveness off the line, good horizontal route breaks for a player of his size, and the ability to consistently high-point the ball downfield; yep, we are in love with Alec Pierce. The Patriots might not be in the market for a big outside receiver after acquiring DeVante Parker. Still, Pierce is criminally underrated if they’re looking for a long-term answer at the position. His release package and route tree at the X receiver spot in the Bearcats’ offense are highly advanced. Pierce’s tape against Notre Dame was an absolute clinic.

Wyoming LB Chad Muma (#48) is one of my early draft crushes for the #Patriots. Good size (6-3/245), play speed, awareness+recognition vs. run and pass.

Click, close, and move laterally vs run, plays the flat in zone, runs with the RB on the wheel, robots underneath the crosser. pic.twitter.com/tQGFkJSs7s

Combining an excellent athletic profile with an innate ability to navigate the box, Muma was a tackling machine for the Wyoming defense, racking up 142 total tackles last season. Muma has an extremely high football IQ making the defensive calls and keeping his eyes in the right place as he reads out blocking schemes. He moves well laterally to mirror and pace out running backs, then is a sure tackler with good closing burst. Muma can also carry tight ends and running backs vertically up the seams or on wheel routes in coverage. Muma is arguably the most polished off-ball linebacker of the group in a loaded class.

Chenal is pretty close to a perfect linebacker prospect by New England’s standards. He’s an aggressive downhill striker with good blocking recognition who easily blows up lead blockers and ball carriers. Chenal also adds tremendous value as an interior blitzer from multiple alignments. Although he’s not an elite coverage player, Chenal can handle the typical coverage assignments that Pats linebackers take on and has excellent closing speed. The Wisconsin product is a compromise for Bill Belichick as a physical enforcer who can still chase down ball carriers in space with an elite athletic profile. This is the prototype for a new-age thumper.