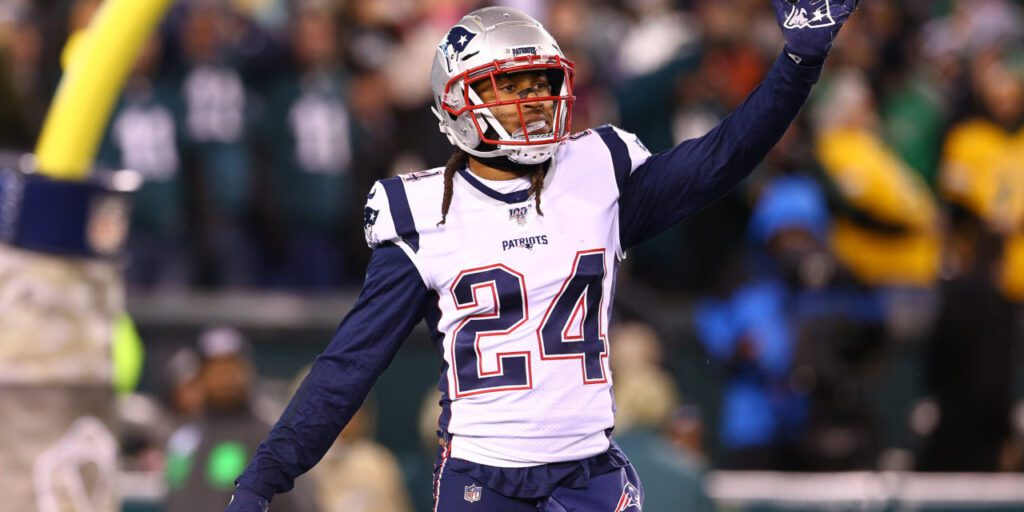 Whether it’s league executives or the media, reigning Defensive Player of the Year Stephon Gilmore currently holds the crown as the league’s best cornerback.

Last season, Gilmore had the second-highest approximate value of any player, trailing only league MVP Lamar Jackson, and the highest wins above replacement of any defensive player, per Pro Football Focus.

The Pats cornerback also tied for the league-lead in interceptions (six), led all players in pass breakups (20), and since 2017, leads all cornerbacks with 54 forced incompletions.

Gilmore excels in man coverage, but the numbers and tape show that he’s excellent in zone coverage as well. In 2019, opposing quarterbacks only completed 45.2 percent of their throws with four interceptions and a 34.1 QBR into Gilmore’s man coverage. In zone, Gilmore allowed a stingy 45.8 completion rate and a positive play rate of 41.7 percent into his coverage (source: Doug Farrar).

And Gilmore’s coverage stats weren’t solely a product of a potent pass rush either.

According to Pro Football Focus, Gilmore led all cornerbacks in PFF grade when the opposing quarterback had a clean pocket (91.5) and also had five interceptions in those situations.

To understand what makes Gilmore so successful, one must first understand his mindset.

The reigning Defensive Player of the Year approaches every rep like a game of chicken; whoever moves off their spot first at the line loses, so he stays incredibly patient.

Gilmore has the luxury to keep his hips square until the receiver declares his route because of elite physical tools that include great size, speed, length, agility, and flexibility. Plus, he knows the receiver has to run his route eventually since the quarterback doesn’t have all day in the pocket.

Although his technique and intelligence sometimes overshadow his freakish athleticism, Gilmore received an elite 9.74 relative athletic score (out of ten) at the 2012 scouting combine.

Here’s a great example of Gilmore’s patience and trust in his technique against Cowboys wideout Amari Cooper (in motion at the bottom of the screen). Cooper is running a comeback along the sideline in a drift concept off of play-action. Cooper goes to a hesitation move to sell an inside release, and as you can see, Gilmore keeps his hips square and doesn’t declare them until Cooper makes the first move. The Pats corner knows receivers don’t have all day to get into their routes, so he waits, and then uses his foot speed and flexibility to mirror Cooper’s route. Prescott throws the “drift” route on the other side with Cooper covered and nearly throws an interception to the middle of the field safety.

After patience and trust in his athleticism comes a supercomputer between the ears that relies on a memory bank of previous plays to anticipate routes and aggressively play off his safety help.

On this Devin McCourty interception, Gilmore breaks down his thought process with NFL Network’s Brian Baldinger. As Gilmore explains, his familiarity with the Dolphins coaching staff had him thinking they’d try to run a crossing concept based on the formation and down and distance. With McCourty protecting over the top, Gilmore gives DeVante Parker a free release and undercuts the route coming across the field to deflect the pass into McCourty’s hands.

Going back to his matchup with Cooper, here’s a similar breakdown by the man himself. This time, Gilmore recalls a play earlier in the game where Cooper ran a shallow crosser from the same formation and anticipated the same play call. With McCourty once again in the deep middle, New England’s divider leverage principles allow Gilmore to play aggressively and undercut the route for another interception.

After patience, trusting his technique, route anticipation, and playing off his help comes incredible ball skills and an uncanny ability to stay calm throughout the play. Gilmore never panics, even when he gets beat, and plays the catch point better than anyone.

I see this as a key teaching point in the secondary — CB in a trail position vs. a vertical route.

Don’t look back for the ball…Squeeze to the WR & play through the hands (or “play the pocket”). pic.twitter.com/O46xLbhIas

On this play, Gilmore has Giants rookie Darius Slayton on an island. When Slayton releases outside, Gilmore tries to smother him, but the Giants rookie runs through contact and wins over the top, or so he thinks. With Gilmore in a trail position, the Patriots teach their cornerbacks to play the hands or play the pocket. Instead of looking back for the ball, Gilmore focuses on Slayton’s hands, squeezes the Giants wideout to the sideline, and gets the ball out once Slayton brings it down to secure the catch.

Gilmore is an ideal fit in Bill Belichick’s man-heavy system because of his press-man abilities, but now fully immersed in New England’s playbook, Gilmore excels in zone coverage too.

In this sequence, Gilmore baits Giants rookie Daniel Jones into an interception. In the first play, Gilmore matches the receivers’ route underneath and leaves the corner route open in cover-two. After seeing that play once, the Pats make a check the second time around. This time, the Pats make a “trap” call in their “five trap shoot” coverage. Instead of matching the underneath route, Gilmore makes Jones believe it’s the same coverage as before, but falls off his man and jumps the flag pattern for an interception.

Along with trap coverages, Gilmore’s technique in standard zone coverage calls is superb.

Here, the Patriots are in a cover-two structure, and the offense tries to high-low the boundary corner (Gilmore) with a levels concept. The Eagles combine a quick out with a deeper corner pattern to put Gilmore in conflict; he can cover the flat or the corner route but not both, or that’s what the offense thinks. Gilmore puts himself in a position to squeeze the corner route and drive on the flat, reads Carson Wentz’s eyes, and forces an incompletion along the sideline.

According to our exclusive partners at BetOnline.ag, the Pats cornerback currently is tied for the sixth-best odds to repeat as Defensive Player of the Year in 2020 (plus-1800).

Last season, Gilmore became the sixth defensive back in NFL history to take home the award, and he was a hugely deserving winner that led the NFL’s best defense.

New England’s game plans defensively started with Gilmore’s ability to match up one-on-one with the opponents top wideout without much help.

With the two-time All-Pro on an island, Belichick and the coaching staff used different coverage techniques on other threats and committed extra bodies to the pass rush.

The Pats cornerback once again spent his offseason with former NFL cornerback turned trainer Dré Bly, who works on football-specific drills with Gilmore to keep him sharp.

Gilmore’s play over the last two seasons will be tough to top, even for him, but he’s now the gold standard for cornerbacks as the best lockdown defender in the league.