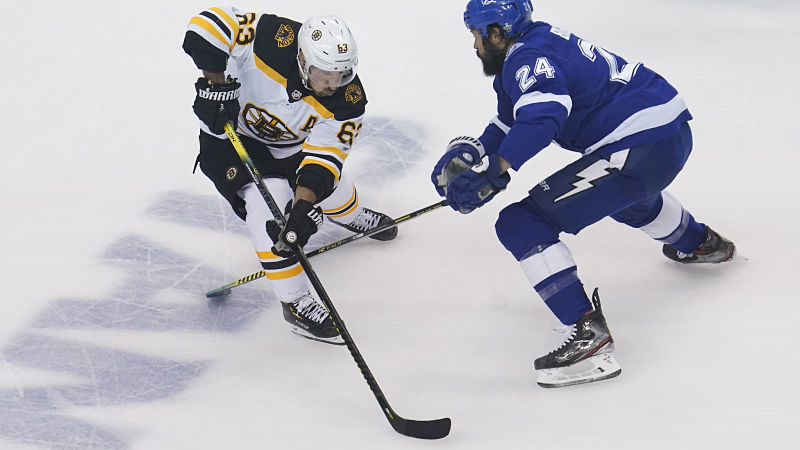 Five minutes into the first overtime period, it was Ondrej Palat’s stick that brought an end to the game. The goal gave the Tampa Bay Lightning a well-deserved 4-3 win over the Boston Bruins.

Following Bruins goaltender Jaroslav Halak failing to corral a rebound attempt, Palat put away a chance in front of the net to tie the best-of-seven series 1-1.

It looked as if the Lightning might walk away from Game 2 winners in regulation, but Brad Marchand had other plans. With a just over four minutes left in the game, the Bruins maintained zone time thanks to Tampa Bay’s inability to clear the puck. Following another big save by Vasilevskiy, Marchand found himself at full extension to feed a puck back out to the point. Seconds later, with the clock reading 3:58, Marchand was on the revieing end of a cross-crease pass, putting it away to tie the game at 3-3.

Earlier in the third period the Lightning took its first lead of the series when Victor Hedman fed a long-range pass to Blake Coleman. The pass sprung Coleman on a breakaway where he beat Halak’s five hole.

Blake Coleman’s second of the night gives Tampa their first lead with 9:20 left in the third.

Boston looked to take control of the game in each of the first two periods but were answered each time by Tampa Bay.

In the first period, the Bruins struck first when Nick Ritche jammed a loose puck under Vasilevskiy’s pad.

Just over two minutes later, it appeared the Lightning had responded with a goal of their own. Upon a review, Barclay Goodrow had been offsides entering the zone, nullifying the goal.

With just over seven minutes remaining in the period, Tampa Bay did respond, this time Zach Bogosian weaving through the Boston defense and dishing to Coleman to tie the game at 1-1.

The second period saw much of the same with the Bruins striking first—this time on a power play. Tampa Bay once again wouldn’t be outdone. 55 seconds later, Kevin Shattenkirk sent a shot in from the right faceoff circle. Nikita Kucherov tipped the puck just enough to put it in the back of the net and tie the game.

Jaroslav Halak looked solid for much of the game, even making huge stop with his right pad in the third period to keep Boston in the game. The 35-year-old goaltender stopped 33 of 37 shots on the night, one shot too few to take home a win.

Despite the heroics of Brad Marchand, Boston still left Game 2 with a loss. It wasn’t for a lack of trying on behalf of the Bruins winger who two of the Bruins three goals.

Having been outplayed much of the game, Boston still found itself down just one goal as the game wound down. What makes Marchand’s game-tying goal so impressive goes beyond the fact that it tied a playoff game with less than four minutes remaining, it’s the effort it took to make it happen.

This was just pure chaos on Brad Marchand’s goal pic.twitter.com/RDcc86MnN5

Marchand ended up sprawled out on the ice to make sure the Bruins could keep possession of the puck in their offensive zone. Then, just a few moments late—covered in snow and all—Marchand stood ready to receive a Sean Kuraly pass to tie the game.