Malcolm Brogdon took on a vocal role with the second unit in the early days of Celtics practice, trying to assist without overstepping. 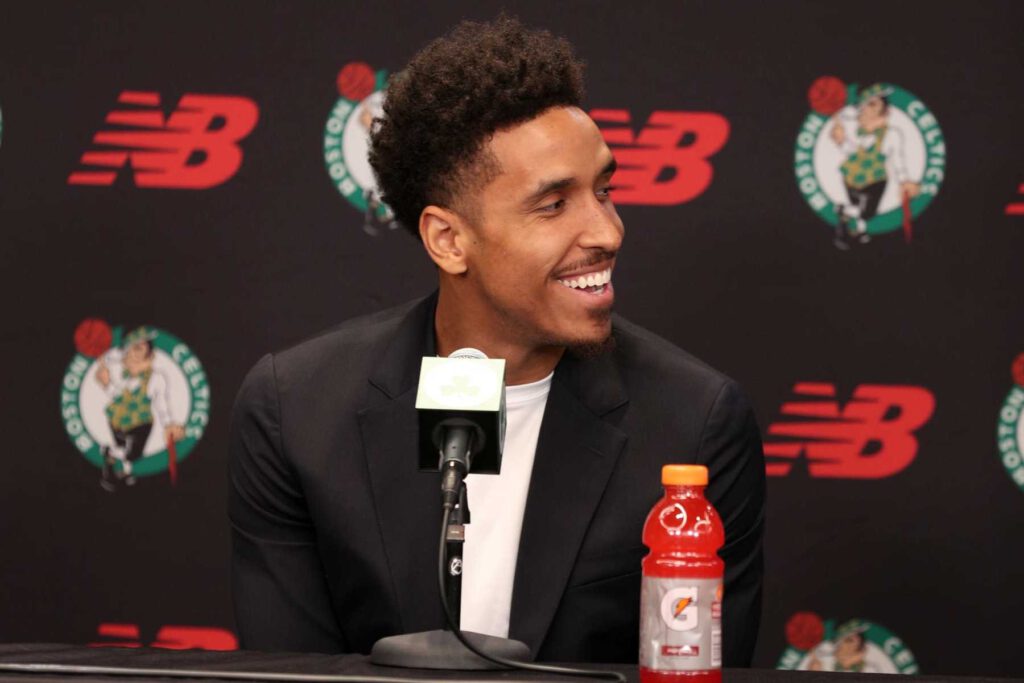 BOSTON — Malcolm Brogdon and Marcus Smart used to always greet each other after games. The Pacers assigned Brogdon with Boston’s lead guard defensively more often in his recent seasons and they spent the nights chirping back-and-forth. Smart’s known Brogdon since before the NBA, and his girlfriend is friends with one of Brogdon’s brother’s girlfriends. For now, they’re on opposite sides in practice.

The Pacers years didn’t go well for Brogdon. Indiana hasn’t made the playoffs since 2020, a quick exit against Miami. He never reached 60 games played in three seasons there, falling to 36 through achilles pain last season. Brogdon went there in free agency to try to lead his own team and they pivoted away from him, and now at 30-years-old he felt ready to sacrifice. He set a tone upon arrival in Boston by agreeing to take a bench role, something he hasn’t done since the 2017-18 season. This roster is the best he’s ever played on, he said on Tuesday, and Brogdon realized how Smart thrived at the point guard position for much of last year.

“I think people build up a feud between us, about, you know, they’re bringing in a point guard, yada, yada,” Brogdon said at media day. “At the end of the day, me and Marcus are going to be on the floor a lot together, playing together. Me and Marcus have different strengths that work really well together. We’re both really competitive and are going to push each other and help each other. As far as our conversations, they’ve been great. Talking about the identity of the team, but more so just trying to get to know each other before the basketball, because that’s a lot of the time more important, knowing someone before you get into the details of the game.”

Given Brogdon’s wing size and sturdiness defending off-ball, his ability to hit catch-and-shoot threes at a high level and make secondary reads with the ball it makes sense that the two guards can thrive together. Derrick White and Payton Pritchard face bigger questions about their roles than Brogdon and Smart. They’ll both play well over 30 minutes each night, and aside from crunch time lineup decisions shouldn’t impact them.

That dynamic could still become Joe Mazzulla’s first challenge as Celtics interim head coach. Ime Udoka found a lineup that thrived in Game 1 of the NBA Finals that didn’t include Smart, who checked in for Pritchard after Boston made its fourth quarter run with White and Pritchard. That rotation wrinkle didn’t play out again for the rest of the series as the Celtics lost 4-of-5. The back court Mazzulla takes over is more crowded.

“We have a great core coming back in Smart, JT, JB and Derrick,” Mazzulla said. “Adding Malcolm just brings us more depth. We also have Payton and we also have Sam Hauser, so our guard depth is great and I think that’ll help us down the line to be able to play different lineups and do different things which will give us versatility. We have to be ready for anything. The NBA season is a long season, you don’t know what’s going to happen. I think trying different things gives us different identities. I thought the one thing that we did great last year was we did what made sense from a standpoint of what the matchup was. If there’s a lineup we can get to that makes sense and gives us advantages on both ends of the floor then I think we’ll do it.”

Brogdon led the second unit alongside White and Grant Williams on the first day of practice, which lined up Smart and Brogdon head-to-head while they both did most of the communicating for their respective teams. He sees Smart and Al Horford as the vocal leaders on the roster and yielded to them through the first days of training camp, while Jaylen Brown and Jayson Tatum continue to lean into more vocal roles themselves.

The goal for Brogdon is making his presence felt without overstepping. He’ll make extra passes to find better shots and focusing on making plays for his teammates. The idea, Smart told CLNS Media over the summer, is for Brogdon’s playmaking to relieve pressure on himself, Brown and Tatum. They all knew as well as Brad Stevens did that Brogdon represented a missing piece. His amicable stance toward his role has allowed for a smoother transition than many expected when the Celtics traded for the former starting guard over the summer.

“A guy like me that’s coming in here, I’m not going to be the first or second option. Just being willing to sacrifice. I came from a team where I was the leading scorer. Guys know that, they know what I can do, they know what I did,” Brogdon said. “So to come in here and be able to sacrifice … that shows a lot.”

Brogdon assessed his goal this offseason and realized he wants to win, having only made the east finals during an injury plagued 2018-19 postseason. That started a string of lower body injuries from his hip down to his heel, which urged him to pace himself this summer and sacrifice peak shape for a fresh start in camp, though he’s visibly stronger on a team where he’ll likely guard a range of positions in Boston’s switching scheme.

If Brogdon plays a role comparable to the one he did in Milwaukee he’ll probably see his ball time and touches decrease by around 25%. That’s roughly the amount Smart received last season. Boston hopes he’ll bounce back to the 44% catch-and-shoot mark from three from two seasons ago, rather than the 33% he posted in a rough campaign last year. It’s hard to expect full health at this point in his career, and though a first-round pick might’ve qualified as an overpay without competition, they were uniquely able to sustain an injury to the guard.

The Celtics offense isn’t built around him and they have Smart, White and Pritchard, as well as both Brown and Tatum, as playmakers. Brogdon’s turnover rate is as low as anyone’s in basketball. Since he’s played many of these Celtics players in postseason series and in recent years with the Pacers, it gave him a front row seat to many of their issues. He’s watched them closely from  home during the postseason and hit the ground running with a group that knew its playbook, identity and goals on the first day of camp.

At this point in his career, he’s just trying to assist.

“I’ve played against these guys so much. I know what they’re missing, I know what I can provide … a lot of it is ball movement,” Brogdon said. “We have some of the best ISO players in the world on this team, so the strength of this team this year has to be playing together, moving the ball and developing that chemistry early on so we don’t get in a hole like they did last season. We get off to a good start and we trust each other from the beginning.”