The historic defense the Celtics boasted last season played average to begin this season through almost the quarter mark. Will it improve or continue to stagnate? 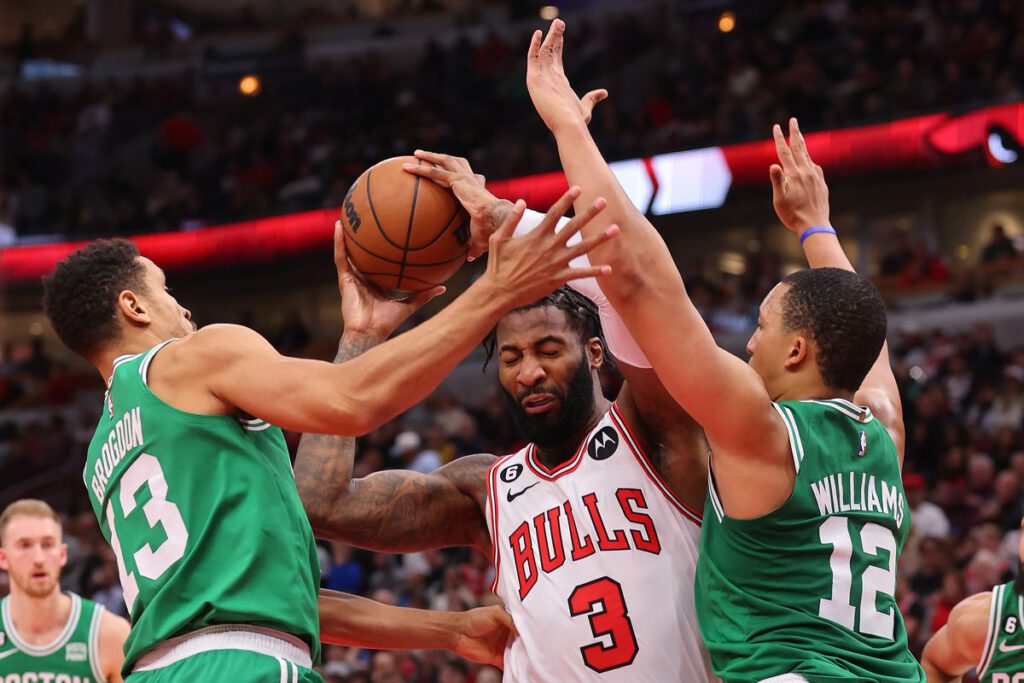 They wanted to break up plays, block shots and aggressively switch on the perimeter like no other team in the league. A stretch of 24 wins over 28 games saw them post an astonishing 104.7 defensive rating, outscore opponents by 15.6 points per 100 possessions and hold them to 58.4% shooting inside five feet, all league bests. They boasted top-five marks guarding the mid-range, corner three and above the break during that run. Teams turned the ball over almost 14 times against Boston every night and only the Grizzlies blocked more shots per game last season.

These Celtics don’t look or play the same on that end, lagging at 16th in defensive rating (111.8), ranking last in forced turnovers (12.5) and opponents continue to chip away at them from mid-range. Players and coaches expressed confidence that’ll turn around, and Joe Mazzulla raved about their two-game stretch as the league’s top unit, then Boston gave up 119 points to the Bulls that night in a narrow win. Their historic offense drove a nine-game win streak after, but a disconnected 121-107 loss in Chicago ended it on Monday and led Malcolm Brogdon to call out the group — again. He previously said the Celtics’ game-to-game adjustments weren’t sharp.

“I think we’re such a high-level shooting team from the arc, we rely on that,” Brogdon said. “I think we need more balance, especially if those threes aren’t falling, we’re not making shots out there. We gotta be able to play inside the arc and still defend, for sure. That’s one thing that can’t slip regardless of how we’re shooting the ball in the offensive end.”

Marcus Smart agreed that Boston’s shooting can impact its defense. The Celtics shot 5-for-17 from three in the first quarter (29.4%), 8-for-26 in the first half (30.8%) and allowed the Bulls to shoot 49% from the field and 43.8% from three on their way to a 63-50 lead. Boston worked back within nine points twice in the fourth quarter by holding Chicago to 10-for-22 shooting (45%), but they couldn’t pile up the turnovers they did on the Thunder one week earlier to pull off a comeback. The Bulls, like Oklahoma City, scored 121 points against the Celtics.

The higher pace Boston plays at lends itself to more points overall through more possessions, and they’re coming out on top as the league’s second-most efficient group offensively (61.6 TS%). They’re a top-10 team at preventing and guarding transition plays, so they have an advantage in that area, but their half court defense ranks 21st.

It’s difficult to compare this season to last because league-wide teams have shot better from the field, three-point and free throw lines. They’re scoring two more points per game thanks to adding one more possession per game, but the numbers are beginning to even out. After only allowing 120 points 10 times last regular season, the Celtics have done so five times already to begin this year.

That late defensive surge against Oklahoma City and hot shooting in Orlando allowed them to salvage two wins on those nights, but Boston’s historic offensive pace will likely come back to earth at some point.

“It puts a lot of pressure on your defense when you’re not making shots,” Smart said. “It’s part of it, you’re going to have nights like that, you just have to find a way and tonight we didn’t.”

The Celtics continue to attempt a greater percent of their shots from three (48.2%) than any other team while they’re reliant on Jaylen Brown and Jayson Tatum to draw most of their league-average free throw attempt total. They take care of the ball and produce great shots, but they rank 23rd in attempts at the rim, 29th in offensive rebounding and their 11.1% opposing turnover rate (30th) limits their offensive flexibility. Boston only ranks 20th in transition frequency, according to Cleaning the Glass, despite boasting top-10 efficiency in that area.

Right now, they’re reliant on passing, running off of defensive rebounds (10th in DREB%) and shooting. They’re going to need defense to remain flexible, and they’re taking small, inconsistent steps on that end. The Celtics have fouled less often in recent weeks (6th in FTA allowed over last 10 games), they’ve moved into the top-10 of limiting opponent efficiency (52.7 eFG%) and opponents have hit their free throws at a better rate than the league average (79.6%). Small changes could swing their defensive fortune, but they’re also seeing individual lapses.

While Al Horford and White have stepped up to guard 27.9 shots per game and hold opponents to 39.8% shooting in their individual matchups, Brown is allowing 46.4% shooting, Tatum 47.3%, Grant Williams 49.2% and Marcus Smart 50.9% shooting from the field. Those numbers aren’t reflective of perfect credit or blame for the slow start, but rather an overall uneven effort with spurts of greatness like lockdowns of Miami, Memphis, Atlanta and Washington in dominant wins.

“It’s something that we’ve got to continue to work on,” Derrick White told CLNS Media. “We focus on it pretty much every day … we understand to get to where we want to be at, we’ve got to be (at the top defensively), so it’s something we’ll work on and are focused on. A lot of it comes down to individual defense, we’ve got a lot of guys that can guard multiple positions, so we’ve just got to take on that challenge and do what we do.”

The easy answer awaits when Robert Williams III returns, which will inevitably improve Boston’s 11th-ranked defensive efficiency at the rim (62.2%), allow more switching and contested threes, which they’ve reached at the fourth-lowest rate in the league (17.0 per game).

A drop-based defensive scheme has allowed opponents to shoot 43.8% from mid-range (9th) while taking the most attempts there any team has allowed (16.2 per game). They’re limiting three-point attempts (32.1 per game, 6th), but 18.9 of them are wide open and being hit at a 38% rate. Some top-level luck against open threes buoyed their early success preventing makes (36.1%, 20th).

That shot composition is what Joe Mazzulla wants to see, so it’ll be interesting to see how the scheme adjusts once Williams III returns. Mazzulla said Williams III should fit into what the Celtics are already doing at that end, so it’s conceivable he’ll play some drop and roam defensively like he did last year, the key to their disruptiveness, which needs to return as much as anything else on the defensive end.

“I don’t really know (why we’re not forcing turnovers),” White said. “Maybe teams are just shooting it and not passing it, I don’t know. Obviously you want to create offense from your defense, and I think it’ll all work out at the end of the year.”