Manning: Celtics Want to Move On in Training Camp, But From What? 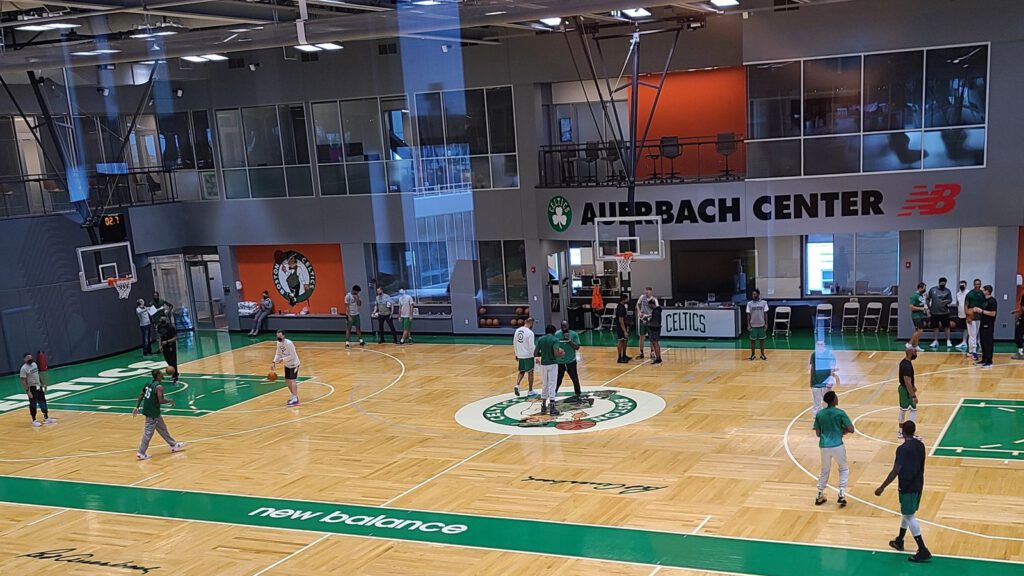 Ime Udoka took over as the Celtics’ head coach. Danny Ainge retired. Brad Stevens moved to the front office. Despite the many legitimate excuses Boston could’ve rested on following the 2020-21 season, the Celtics clearly desired a shake-up. Something deeper than COVID-19, a short offseason and injuries rocked this team.

Marcus Smart appears as thrilled as anyone to move on. He’s affirmed by an extension, after reportedly having his voice tuned out through portions of last year and struggling to instill a defensive identity. Now, at his beloved point guard position, he described no longer needing to look over his shoulder.

Stevens, to his credit, reunited Smart with another defensive tone-setter in Al Horford, then left this group without any lame ducks starters on expiring contracts. It still can be hard to move on without exactly identifying what lays behind, and despite excitement to start fresh at training camp, the past remains strange no matter how many trades the former head coach pulls off. No matter how long Stevens serves as a willing, admirable foil for Udoka to contrast against. Looking forward requires some hindsight, questioning how and why the changes happened, and how sustainable what remains can become.

Four months ago, Smart stood confident that the Celtics could figure it out as constituted moments after the team’s 4-1 series loss to Brooklyn. Jaylen Brown, Robert Williams III and Kemba Walker got hurt entering a series Boston probably shouldn’t have been in anyway, as an underperforming seven-seed. Smart noted personal tragedies and the strain of pandemic life, along with the way a condensed and virus-impacted season hurt the group on the floor. Running it back sounded inevitable, as Stevens noted points of improvement that now sound accordingly managerial.

The next day, an unheard-of succession plan, involving Ainge’s sudden retirement and the end of the Stevens era at head coach in order for him to ascend to president, came to light. They noted fatigue, a trade deadline Ainge epiphany about his future and a hasty search for his replacement.

An influx of good vibes and aspirations reminiscent of the response that followed Boston’s 2019 debacle filled the room early this week. Old faces rejoined the team to rejoice with younger players now comprising the core of the roster. Almost everybody savored the chance to turn the page past the Celtics’ baffling assist rate, defensive woes and massive early deficits they built.

“Moving on,” Smart said at media day on Monday. “I understand that things didn’t go as planned as well for us last year, everybody had things that they were dealing with personally on and off the court, so for us it’s just starting fresh. Starting over and you know kind of rebuilding that mentality that we know that we need to have, that we know we’ve had over the years. Just getting back to us.”

The need for that rings true for Smart, down defensively last season amid injuries and an increased offensive load, and a team uncharacteristically deliberate on offense and passive defensively. Udoka took on the role of an opposing scout with Brooklyn in his opening interviews, picking apart how the Celtics refused to blow up actions on defense. He again criticized the team’s low assist rate from last season, affirming unselfishness and playmaking as mandatory in his new system.

The Celtics noticed. Brown and several teammates pointed out the new head coach’s bluntness. Enes Kanter, who Udoka quipped is a pain like himself, commented on the new coach’s willingness to tell players want they need to hear instead of what they want to hear. Brown and Tatum desired hard coaching from the new voice in the room.

“I think hard looks different for some coaches than other coaches, like getting coached hard from Brad, it’s not really getting coached hard, that wasn’t his coaching style,” Brown said. “So it depends for sure, I keep an open mind, so I’m open to any form of teaching and/or learning that exists … I expect to be in (Udoka’s) office a lot.”

Brown emphasized the need for diversity that Udoka brought to the table with a new staff including Black former players. Grant Williams noticed this group’s increased availability, as the bustling head coach instituted a system through delegation where the Auerbach Center became the player’s space to meet and improve during the offseason.

Grant shed 10-15 pounds, after uncertainty about his role landed him caught between positions in terms of size last year. Smart and Robert Williams III appear more assured of their standing on the team, with extensions in-hand and their roles more defined than one season ago.

The problems may not all be solved by good vibes, new faces and an older roster complexion, though Kanter aims to lower the temperature this year through ups-and-downs in his return. He factored into a similar drive to loosen up the room and fill it with positive influences following the 2019 debacle, translating into a successful 2020 run in the Bubble that fell just short of the NBA Finals.

“The talent is there,” Kanter said. “For us to get to the next level, it’s team chemistry … when things start to go wrong, who’s going to be the leader that’s going to step up and say … let’s stay together … the person who’s going to bring the positive energy is really, really important in the locker room … for me, the one thing I’m going to try to do is make sure everybody’s smiling, everybody’s happy, everybody’s good.”

Boston’s Bubble run ended with its own tension, a locker room feud reportedly centered between Brown and Smart. The bad energy around that finish seemingly flowed right into a new season just three months later after Kanter departed to Portland, Gordon Hayward walked and depth waned.

Tatum saw slow starts, some stemming from his early inefficiency, and lack of energy as defining issues last year. Brown wants to see the team’s pace ramped up again, while sharing some of Smart’s concerns about the group’s diminishing defensive identity. Udoka wants to bridge the group’s offensive hubs by raising the playmaking ability of each star. That means more ball time for each, allowing a continually aggressive Smart to balance that instinct with finding mismatches, when he got asked about the guard’s shooting tendencies.

“I guess everybody just being held accountable,” Tatum said he’d like to see from Udoka and the new staff. “I can tell they are excited and motivated for a new journey. It’s a new season and we’re just trying to get last season behind us for a new start.”

Udoka also wants to ramp up the franchise’s development system for its underbelly of young talent like Romeo Langford, Aaron Nesmith and Payton Pritchard. Stevens and his new head coach both agreed on taking an older, more reliable direction with the roster. That may leave some of the younger players without roles for now, but Langford and Grant Williams both embraced the shakeup if it leads to winning again.

For Williams III, who needs to join the team’s core pillars from the developing youth for the group to raise its ceiling, accountability will stem from buying into a health program that allows him to persist through the season. He put on some weight and Udoka expects a build-up in his minutes, as he does more things off the floor to ensure a healthier campaign. Some of that comes down to luck, Udoka added, while responsibility could swing this team’s fortune equally.

Stevens, who remains close as president, but isn’t thinking about lineups, rotations or even fine practice details, considers this year’s challenges unique to last season’s. He shied away from addressing what the organizational changes aimed to change directly as his role, however successfully he performs it, serves as a reminder of the strangeness of last year and the moves that followed.

The 44-year-old recently renowned coach moved on to executive life for good? That remains among the unanswered questions that make it difficult to turn that page too quickly.

“I think in general, the group was disappointed with how the season went, for the most part, but obviously how it ended,” Udoka said. “And just building confidence back and having that fighting spirit, that obviously you reach all those conference finals years in a row and then fall a little short of that, you don’t meet the expectations, so guys want to move past that disappointment and they’ve come in with the right attitude, mindset and are working very hard to get to know each other and what we want them to do.”