Grant Williams scored 27 points with the game of his life in Game 7, but unlike Kelly Olynyk five years ago it came by doing his job as he did all season. 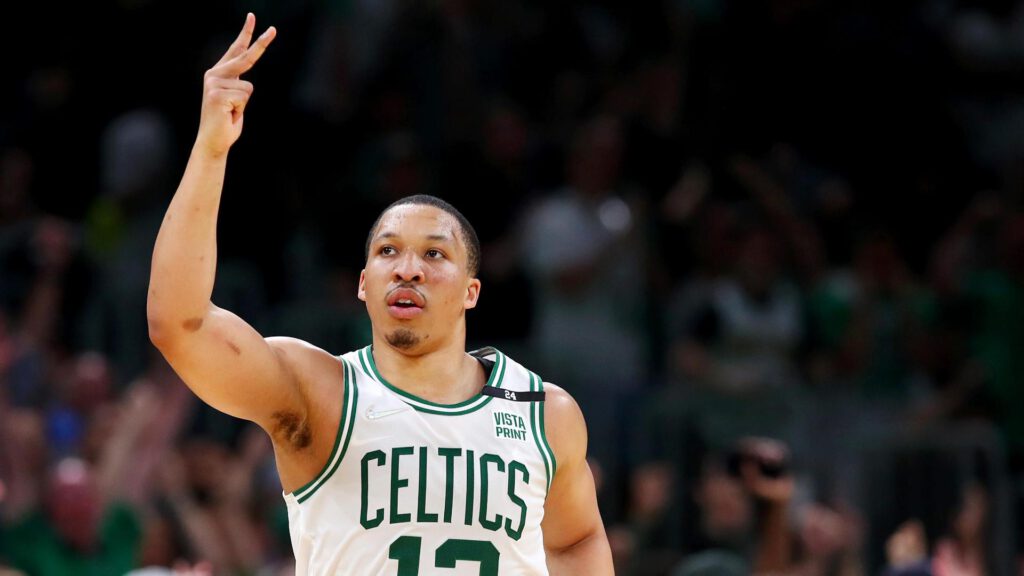 BOSTON — The only difference about shooting in a Game 7 that Grant Williams could identify to CLNS Media was overexcitement that he needed to quell in the opening minutes of the most important game of his career.

Williams had played a Game 7 before, as a rookie in the NBA Bubble, appearing for seven minutes without taking a shot. Two years later he started and would be the center of the Celtics’ offensive game plan with the Bucks selling out to stop paint touches, Jaylen Brown and Jayson Tatum. Williams hit his first try in the corner from Marcus Smart, then clanked two wide open shots on Brown and Tatum’s kick-outs with Brook Lopez miles from him in the paint. As the Celtics spiraled offensively, they looked away from Williams wide open in the corner.

He wouldn’t shoot again in the first quarter, but Williams remembered a barrage of encouragement from Ime Udoka and others. While Derrick White, Daniel Theis and Marcus Smart have all struggled to make open threes at points during this season, the three combining to shoot 0-for-6 in the first, Williams had knocked down shots consistently since the opening days of the year. If Boston’s main floor spacer gave up, the Celtics would probably have no chance of beating the Bucks. So he shot 15 more threes over the next three quarters, the most he could ever recall attempting in a basketball game, hitting six and scoring 27 points in a 109-81 win five years to the day Kelly Olynyk similarly stunned the Wizards with 26 points in Game 7 of the east semifinals.

Olynyk’s 10-for-14 shooting stood out for its randomness, catching fire for one quarter on the biggest stage. There’s parallels between Olynyk and Williams, but the key difference is nobody would’ve been surprised if you told them Williams hit 38.9% of his threes during a season where he converted 41.1%. He did his job, albeit at a higher volume.

“It’s tough to get in your own head when your entire team, like 15 people, walk up to you and say let it fly, keep shooting,” Williams told CLNS post-game. “For me, it was just like alright, they’re encouraging it, might as well take advantage. Each one, as time went on, got more comfortable, kept shooting it.”

The defending champion Bucks went down with the defense that got them through the NBA Finals one year ago and built a wall at the rim with Lopez, posting him up at the other end to try to find offense outside of Giannis Antetokounmpo. Williams shook free cutting back door to start the second quarter when Tatum switched Antetokounmpo to the perimeter with the Bucks into their smaller lineup. He got outside to block a Wes Matthews three attempt on the other end, getting Boston’s transition game going with Brown pushing the ball ahead after the stop into a pair of free throws. Tatum and Brown scored five straight points after to tie the game at 30, the Celtics erasing their early 10-point deficit in short order.

Williams and the Celtics tagged the Bucks with seven fouls early in the quarter after drawing none in the first, staying aggressive as Antetokunmpo mustered his final charge of the series. He stuffed Williams and Smart at the rim on separate plays and scored seven points, but Williams tried four more threes to close the quarter and hit two. Milwaukee could’ve adjusted after seeing him put the ball in the net at a steady rate, but didn’t. Smart rushed Antetokounmpo as the final seconds ticked away in the second quarter at mid-court, firing up a shot upon feeling contact and stealing three points to give the Celtics a five-point lead at half. Boston never looked back.

“It’s who they are and who they’ve been the whole series, but we don’t want to just settle for the outside shot,” Udoka told CLNS. “We’ve gotta mix it up, and I think we did that best in Game 6, getting 50-plus points in the paint. Tonight, same thing, when they started to switch we got the matchups that we liked. Attacked downhill, got some fouls, got into the bonus and kind of picked up our aggression from there.”

Those second quarter makes sent the Celtics scorching out of the locker room. Brown hit a pull-up shot in the lane, Williams and Tatum caught and buried a pair of threes and Brown followed with five straight points to put Boston ahead by 12. Antetokounmpo could only continue to barrel downhill, falling to 3-for-9 in the frame with only Jrue Holiday helping him out with pull-up twos. Giannis missed a pair of layups, a culmination of a series-long effort by the star carrying Milwaukee’s offense facing a physical Celtics defense that wore him down. The reigning Finals MVP played the entire quarter and looked exhausted by the end of it. Udoka summed up fighting Giannis for seven games in one word: hard.

Meanwhile, Boston’s offense kept finding Williams, who dunked and buried two more triples. They fittingly fed White, struggling all game, for a last-minute three that boosted the Celtics ahead by 15. Udoka stressed early in the season for Brown and Tatum to continue to trust their teammates even when their shots didn’t fall. Williams went stretches, including Game 5 and 6 in this series, where his shot cooled down. He faded from the crunch time rotation in Milwaukee to key the team’s turnaround in a smaller lineup down 2-3 in the series. He missed badly early in a Game 7 as the Celtics started 29.2% from the field.

Last year, Boston might’ve gotten away from him in favor of more looks for Brown and Tatum. This year, Williams finished with six more shot attempts than any other Celtic, pumping his fist on the baseline after chasing down Pat Connaughton in a runaway fourth quarter for another block.

“Understanding who they are and the game plan on a night-to-night basis,” Udoka told CLNS . “(Brown and Tatum have) pretty much seen everything throughout the season and I wouldn’t say it’s only Grant, it’s everybody on the floor. If they miss somebody, it’s not intentional because of a certain player who’s open or not. That was the case again, they loaded up extremely heavy off of those guys, try to make them prove it and led to some assists by those guys and us getting 55. The mantra of the series was take what they give us, let it fly and understand they’re going to pack the paint. Happened to make 22 tonight, but we felt we were very close to having a really good game offensively, kind of blowing it open, hadn’t played our best and got some tight wins, but it’s great to save our best for last.”