Manning: Shooting-Starved Celtics Will Need to Make a Move

The Celtics rank among the worst shooting teams in the NBA, with no clear sign it'll turn around for a cast of below-average three shooters. What else can change? 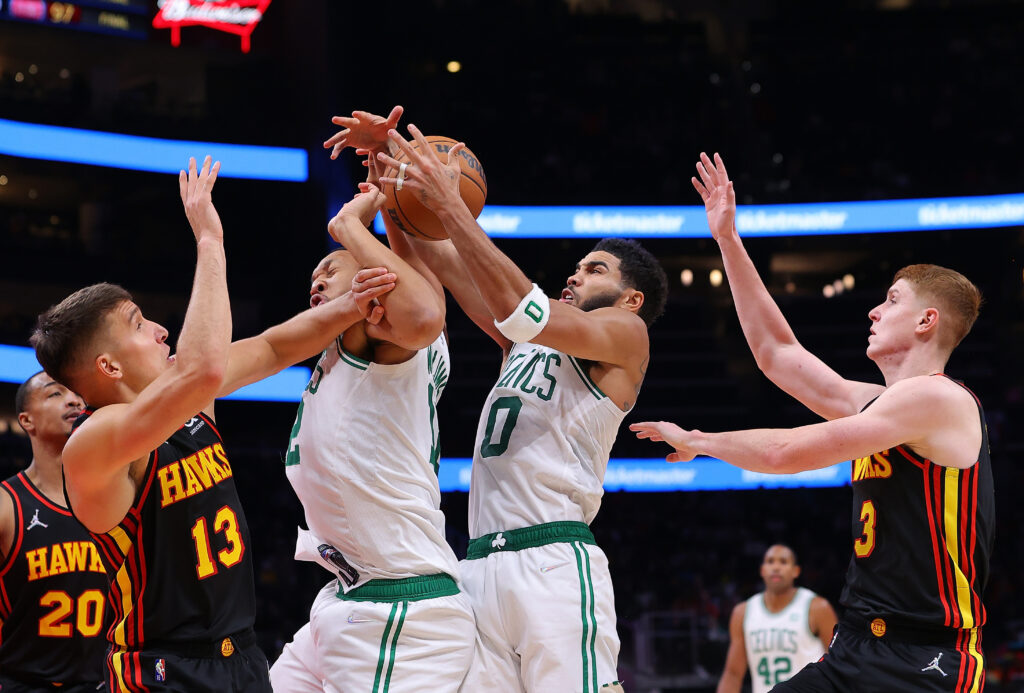 ATLANTA, GEORGIA - NOVEMBER 17: Jayson Tatum #0 and Grant Williams #12 of the Boston Celtics battle for a rebound againt Bogdan Bogdanovic #13 and Kevin Huerter #3 of the Atlanta Hawks during the second half at State Farm Arena on November 17, 2021 in Atlanta, Georgia. NOTE TO USER: User expressly acknowledges and agrees that, by downloading and or using this photograph, User is consenting to the terms and conditions of the Getty Images License Agreement. (Photo by Kevin C. Cox/Getty Images)
Share
Facebook Twitter Email

Double-big. Win. Loss. COVID protocol. Injury. Occasional turmoil. Missing a wing. Holding a TPE in his place. Hoping younger, inexperienced players can rise up and contribute, only to see them buried. Stop me if this all sounds familiar.

The 2021-22 Celtics share many similarities to their predecessor, and their .500 pace hammers home a familiar frustration. Despite Al Horford’s nearly unmatched defensive dominance to start the season, noticeable strides from Robert Williams III and Grant Williams, along with Dennis Schröder’s welcome scoring burst the team can’t escape inconsistency. Even while boasting one of the league’s best defenses in recent weeks, a difference from last year, a possibly fatal shooting flaw hampers the offense, after the Celtics ranked top-10 from three last year. A trend highlighted here last week.

Boston blew a 19-point lead on Saturday in Cleveland. The C’s shot 26% from three, then did so again in Wednesday’s 110-99 loss to the Hawks, following solid wins over Milwaukee and the Cavs.

Ime Udoka contends more with each passing week the weight missed shots cast over the team. He moved on from saying shots would fall, then returned to that hope Wednesday. No matter how much he talks about expected efficiency of the looks Boston generates, they rank 26th in three-point percentage. Williams III’s rolls have generated more spacing than Marcus Smart, Josh Richardson, Horford and Schröder’s outside shooting. Without any significant improvement forecastable — and the team’s shooters largely stashed on the bench — it raises questions about where Boston (7-8) is headed in the near and long-term.

“We feel like Jayson gets going and there’s a crowd on him and guys are getting open looks. I’d like to knock those down, it’d be a different ballgame,” Udoka said. “Defensively, we’ve been solid … it comes down to making shots, and so got to keep working on it, encourage them to be aggressive and confident and knock down those shots when they’re there, and that’s all you can do … we don’t knock those down, it starts to mentally wear on you a bit.”

Aggression hasn’t been the issue for Boston. Udoka noted the quality of looks they’re generating. They’ve attempted the 11th-most threes in the league and only three teams averaged worse percentages on wide-open looks. Horford (28.9%), Smart (31%), Schröder (25%) and Tatum (35.7%) could all see their fortunes improve in those spots and the Celtics would likely be over .500. It’s fair to ask how much closer it pushes the team to true consistency, never mind contention. The C’s stood in line with the roster’s career average from deep and still struggled offensively, before a recent slump sunk their average further below that 33% benchmark.

Smart averaged 37% last year and Schröder 35% when wide open, while Horford pushed closer to 40%. Tatum thrived when left alone, though that’s not happening now as teams swarm him on and off the ball. He’s being doubled on 28% of Boston’s possessions, the 18th-most of any player in the league per-game. Of the top-20 players in double-teams faced, the Celtics score in the bottom-three of those teams on those players (0.94 PPP), Tatum alongside Fred Van Vleet and Brandon Ingram. It’s part of why Tatum’s averaging a career-low 39.6% from the field and 32.5% from three.

Tatum and the team could stand to take more shots closer to the basket. The lack of cutting and off-ball movement among his teammates stands out. The Celtics rank 24th on shot attempts inside five feet. Smart and Richardson, to their credit, have recently abandoned the three more often in favor of finding comfortable shots inside the arc.

Continuing his trend of avg shot distance increasing every year

So what else can the Celtics do? Barring a waiting game on the three-point percentages, it’s hard to change much when many of the team’s core rotation players don’t have much shooting pedigree. Richardson leans into twos, we know the story with Smart and Schröder fares best at the basket. All three regularly play alongside Tatum.

“(Defenses) don’t really like to help off me or switch … I think the simple answer is make the right play,” Tatum said on Wednesday. “That could be passing to somebody, being a good screener, or finding a matchup and create for yourself.”

Jaylen Brown may be the team’s best shooter, and should help when he returns. Otherwise, the team’s worst shooters are better players overall than Payton Pritchard, Romeo Langford, Aaron Nesmith and Grant. The four unproven younger guys have struggled in spot opportunities, but boast varying levels of shooting credentials. Sam Hauser, a shooting specialist, is playing in Maine.

Pritchard wore a mask for much of the season’s first month following a broken noses and struggled immensely. Among the better catch-and-shoot marksman in the entire NBA last year and a Summer League MVP candidate, he’s outside the Boston rotation shooting 22.2% from the field and 24% from three. Last year, he averaged 47% on catch-and-shoot threes. 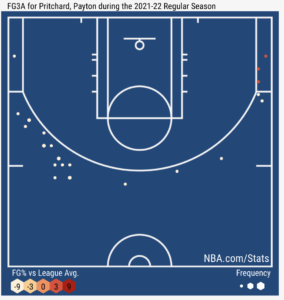 “I don’t know if it has anything to do with the mask,” Udoka said earlier this week. “It could be you’re missing shots, so you’re looking for something as far as that. Just (Pritchard) coming in and being who he is, and hunting shots. We try to get him shots when he’s in … we’d like to find him more minutes, but it’s just a little tough with starting Marcus and Dennis, you try to balance those guys and stagger them after the first quarter. It’s a little tough to find the minutes, but I talked to all the bench guys today and told them I’ve been there as a player, and so stay ready, stay prepared, opportunities are going to come, so take advantage whether you have three minutes or 10-20.”

Langford plays some, averaging 19 minutes and 45% from three. His 50% mark on open threes and 46.7% on wide open looks show potential, on only 1.8 attempts per game. He also provides more defensive versatility than Grant, who’s hitting an encouraging 40.8% from deep.

Nesmith, who Udoka has challenged to not be a liability on defense, finished last season 46.2% on 2.8 threes per game over his final 14 regular season contests. Then, he shot 28.6% against Brooklyn on 14 tries.

The speed of certain moments seems to overtake him, and he’s only averaged 9.7 MPG. He hit 39.8% on C&S plays, though, before also thriving in Vegas, nailing 7-of-9 from deep one game. The shooting’s there in volume.

Grant gained an early edge among the youth, hitting 3-of-8 from three in Wednesday’s loss, but posted a team-worst -13. Udoka may not have well-rounded young players. All warrant some extended run like Williams received early this year to find their shot.

If not — and if the Celtics manage to stay immersed near contender status behind a dominant defense — it could be worth pursuing reliable shooting at the deadline. That landed Evan Fournier in Boston as Danny Ainge’s final trade last season, and he did briefly address the need before departing for more money in New York. Boston has a trade exception from sign-and-trading Fournier, and could use it to take more money back than they send out if they deal a player like Schröder or Richardson for someone like Thad Young, Doug McDermott, Malik Beasley, T.J. Warren, Dillon Brooks or Kelly Olynyk.

Smart also gives the Celtics some matching power once he become trade-eligible closer to the deadline. Boston may balk at giving up core rotation players or long-term salary for worse overall players, but should consider it if those players fit better. The organization may continue to eye an eventual trade for a star. Even in that case, acquiring more enviable players makes the path to that destination straighter.

That’s where another potential route emerges. If the Celtics fall under or around .500 through the trade deadline in a strong conference of likely buyers, what if teams make a strong push at Horford, Schröder, Smart and Richardson and they offer promising picks? Younger prospects? Boston would then stand in a position to listen.

The Ben Simmons situation also lingers, though that’s not solving the Celtics’ spacing issue without acquiring Seth Curry too. A losing Celtics team could simply try to reestablish his value if they can buy low on him.

Nobody wants to see another season of Brown and Tatum wasted. Trying to bolster an inevitably .500 team last year with Fournier, in part, landed the Celtics where they are now, with an awkward bridge roster that doesn’t fully accentuate its stars. Injuries, COVID, all the excuses stand as valid, like last season, but exactly one year after Boston drafted Nesmith and Pritchard, not too much feels different aside from a firmer defensive identity.

“When you’re kind of in and out, and you don’t really know what’s going on, it’s difficult for anyone,” Grant said. “I struggled with that last year, coming in and shooting, and then next thing you don’t play, the next game you come in and shoot again. I think that little consistency will help that, but also it’ll just come back to the mean. For example, me shooting in the beginning of the season, how hot I was, versus going from cold, now I’m kind of back to where I feel like I would normally be.”