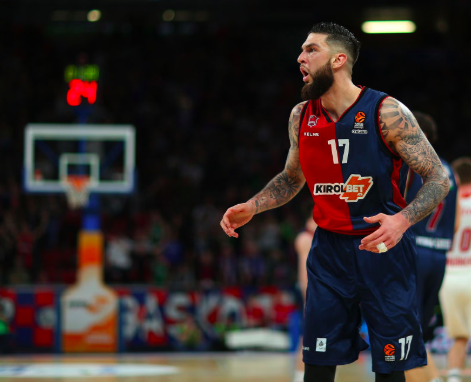 Team USA traveled to LA to face Spain on Friday before the FIBA World Cup begins. Make like a NBA star and forget the US. Even though the roster resembles the Boston Celtics, we know Kemba Walker and Jayson Tatum. Marcus Smart’s propensity to get hurt while hustling is clear.

The French provide a preview into Boston’s unknown. With uncertainty at center, the Celtics need a pleasant surprise like Daniel Theis’ 2017-18 season. Not from Theis, though he is back on a two-year deal, but rather a fresh face in Vincent Poirier.

Poirier appeared via Instagram tossing floaters with Rudy Gobert, fortunately without Galoises, as one Reddit user noted. Boston signed France’s 2015 NBA Draft hopeful after monitoring him for at least two years. He played in the 2016-17 Summer Leagues with Orlando and Brooklyn and then in Spain’s ACB.

His story rings similarly to Theis’. The Celtics cautiously monitored him for years before buying in with a roster spot. Boston tracked Theis for six years, before he joined the Celtics late in the 2017 offseason.

Austin Ainge initially viewed Theis as a fine player with bounce and little more. He eventually developed into a strong positional defender and 40% three-point shooter in the EuroLeague after starting basketball at 15.

Theis posted a +3.4 defensive box plus-minus and +17 net rating in 14 minutes per game at 25 years old as a NBA rookie. When he tore his meniscus, it registered as a significant loss for the Celtics, already down Gordon Hayward and Kyrie Irving.

Poirier’s picked up basketball at 17, late enough to make Theis look like a prodigy. A footballer friend told the 6’11” Celt, likely to register 7’1″ with shoes, he should try hooping. Since then, Poirier’s body filled with tattoos and a player who was “not that good” four years ago made the NBA.

He ascended through rebounding. Five boards increased to 129, then 275, as minutes flowed his way in three seasons in France’s top league. Rim-running and the pick-and-roll became his offensive nature.

His powerful frame pummeled defenders above the rim through traffic. He developed a mid-range game in Spain from 2017-2019 with Baskonia. He’ll test all that and the floater in next month’s tournament.

France ranks third in the FIBA field, featuring Gobert, Poirier, Nic Batum and Evan Fournier. Poirier, 25, will play rotation minutes behind the Utah Jazz star. They’re scheduled against Germany, Jordan and the Dominican Republic in Group G from Sept. 1-5. Theis will dress for the German team in the earliest battle for Celtics center minutes.

Enes Kanter received an introductory presser, he’ll start. Robert Williams garners excitement despite his lapses in positional awareness at the Summer League. It’ll be interesting to watch him and Poirier battle with similar styles. Theis succeeded against second units and should remain in that role.

Brad Stevens could mitigate the position through matchups or eliminate it entirely. It wouldn’t be stunning to see Marcus Smart get run at the “five.” The Celtics will miss Horford immensely either way.

Tatum and Walker ultimately make or break the team. Extra rebounding and defense in the lane still beat a liability position. Poirier projects to be the largest Celtic with a chance to play, sorry Tacko Fall.

Boston reportedly mulled Poirier as its 15th player entering the 2019 playoffs. He wasn’t saving the team’s demise any more than Jonathan Gibson did. He instead possessed the sense to avoid the mess and await the rebuild.

“I won’t move to the NBA to find myself sitting on the bench,” he said in April. Now he’s arrived, with an early chance to realize that statement in China.