Marcus Smart finished with a career-high 15 assists in Monday's win, guiding the Celtics to their best regular-season start in over a decade 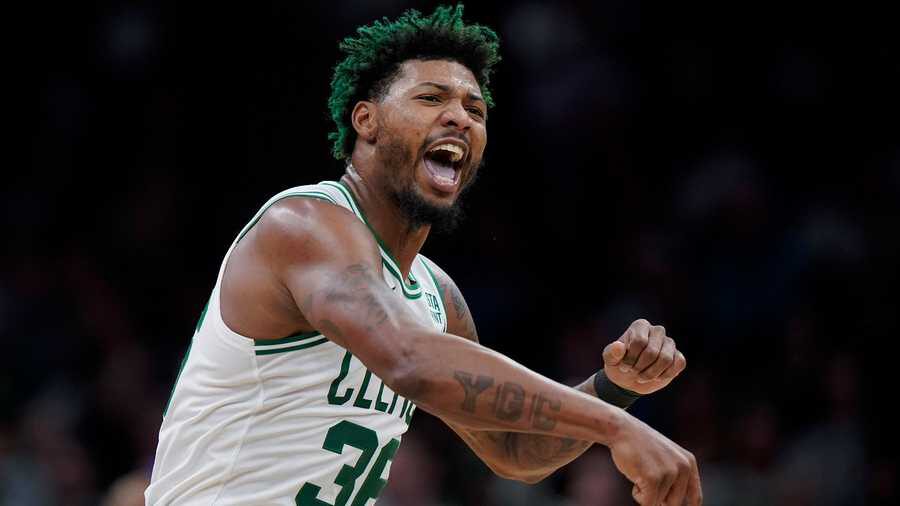 BOSTON — Ever since Marcus Smart was handed the keys to run the Boston Celtics’ offense at the start of the 2021-22 campaign, he’s been on a quest to prove his doubters wrong, and now — 21 games into the regular season — is leading a team with the best record in NBA (17-4).

For years, many considered Smart invaluable in his unique way as a defensive anchor who can supplement the offense in spurts but not someone to entrust to lead on a full-time basis. Marcus was labeled a combo guard in almost every sense of the term, a mixed plate of tenacious, jaw-dropping, at times, defensive stops mixed with unforeseen shooting performances and a side of capable playmaking abilities.

Smart has a way of surprising naysayers when they least expect it. He is a 32.2% career 3-point shooter but also holds the franchise record for most 3-pointers made in a single game (11).

There was plenty of skepticism surrounding the decision to make him the starting point guard, especially amid the Celtics’ below .500 record in December 2021, to which the nine-year veteran responded by leading Boston to its first trip to the NBA Finals in 12 years. After spending a year acclimating to the role, he’s taken things a step further in his progression.

This season, he’s averaging 7.5 assists while shooting at a 44.1% clip from the floor — career-bests in each statistical category. On Monday, Marcus dished out a career-high 15 assists to go with his 22 points on 8-of-11 attempts, including 6-for-9 from deep in the Celtics’ 140-105, lopsided victory against the Charlotte Hornets.

Moreover, he is earning the trust of his new head coach, Joe Mazzulla, who says Smart has taken his playmaking skills to a new level.

“He’s always brought it defensively. I think this year, his ability to see the matchups, see the possession before it happens, and then using our playbook to use the matchup to figure out what he wants to run,” Mazzulla said after Monday’s 140-105 blowout win against the Hornets. “I have full trust in him diagnosing where the matchup is, where the advantage is, and what play call can we call to exploit that. He’s doing a great job anticipating that once he gets the ball, and he’s also doing a great job pushing the pace.”

Before 2021, the Celtics’ All-Star caliber score-first point guard era was in full force. At the height of former head coach Brad Stevens’ era (2013-21) — which led to three trips to the Eastern Conference finals in four years — balancing elite scoring with Smart’s defensive pedigree yielded positive results. Elite scoring from players such as Isaiah Thomas (2015-17), Kyrie Irving (2017-19), and Kemba Walker (2019-21) made the decision to keep Marcus in a sixth-man role an easy one.

But, as the Celtics transitioned to a new era with a pair of All-Stars wings, Jayson Tatum and Jaylen Brown, both signed to their respective max deals, in tow, Smart, Boston’s longest-tenured Celtic, inked a new four-year, $76.4 million contract and an opportunity to lead as starting point guard.

It’s been a healthy balance thus far. Tatum’s leading the early MVP conversations, averaging 30.8 points, 7.7 rebounds, and shooting at a 48.8% clip, while his All-Star counterpart in Brown, who’s averaging 26.1 points while shooting at a 50.7% clip from the floor, is averaging career-highs in almost every statistical category, including points, field-goal percentage, rebounds (6.5), steals (1.1), and free-throws (4.2) per game.

“(Just) trying to get everybody the ball at the right time when they need it, where they like it, and just to get us some easy baskets by doing that,” Smart said after Monday’s win. “It gets everyone’s confidence up. And when people’s confidence is up, they tend to play a little harder on both ends of the floor. We got a lot of great players, and for me to be able to just find them — that’s what I’m trying to do.”

Averaging 121.3 points per game, the Celtics lead the league in offensive efficiency, according to Teamrankings.com. Smart attributes the success to him and his teammates doing their best to remain humble, keeping the big picture in mind — which has been crucial to them boasting the best record in the association as heavy favorites to return to the NBA Finals in 2023.

“Staying focused, staying disciplined has been the key for us,” Smart said. “It hasn’t been easy because there have been times where we are playing so well that you tend to feel a little bit more overconfident in yourself, and we have to humble ourselves and bring ourselves back down before that happens or when that does happen. It’s been a balance for us, but Joe’s been doing a really good job of making sure we really humble ourselves and play the right way.”