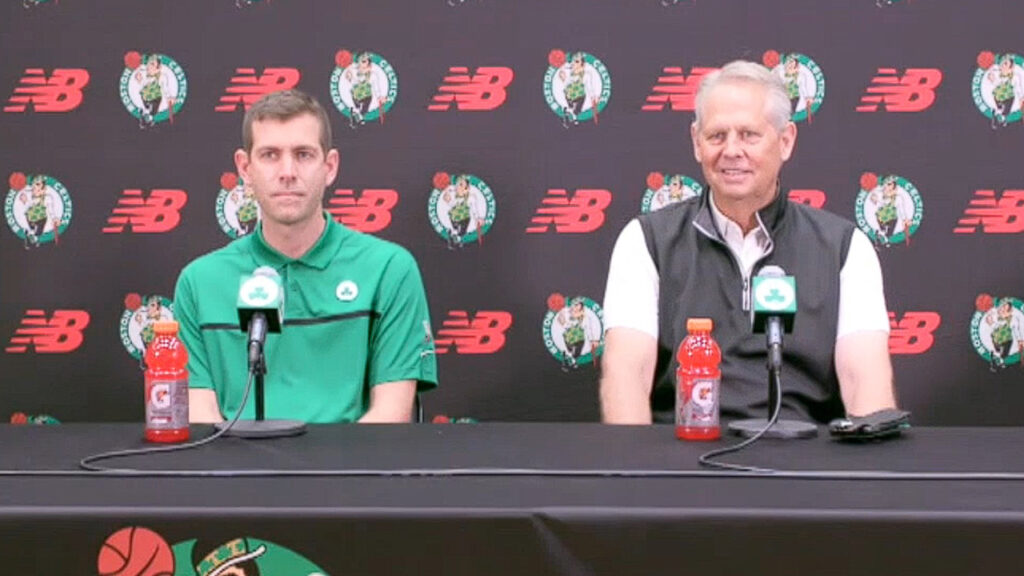 Celtics figures assured that Danny Ainge and Brad Stevens would remain in their roles throughout the previous tumultuous season. While Ainge dropped hints of an eventual retirement, he told Dan Schaunessy two weeks ago he and Stevens would return.

Ainge deciding to pivot and end his career proved only a mild surprise. Stevens succeeding him rocked the basketball world on Wednesday morning. He spoke earlier in the season about not coaching forever, and the previous night discussed how to improve the roster which raised questions about the timeline where Stevens found out he wouldn’t be the Celtics’ coach anymore.

Countless questions emerged out of a landmark day in Celtics history. Here’s one: why? Stevens has no front office experience, re-upped as Boston’s head coach last summer, is 44-years-old and would be in demand to coach other teams. If the Celtics didn’t want him to be their coach anymore after eight seasons, why would he become their favored chief executive? Ainge, Stevens and Boston’s brass sounded more excited in words than spirit about a decision they essentially chalked up to a hunch.

The decision may work, though not without awkwardness. Stevens spent Wednesday attributing his abrupt shift to executive life to his passion, Ainge calling him born for the role before later not addressing Stevens’ lack of experience in negotiating contracts, trades and other executive matters.

A separation of powers seemed to mark Boston’s system, as Grousbeck acknowledged on Wednesday by calling GM and coach distinct roles in Boston. Stevens could never imagine dabbling in both, so why would they shift him to the one he’s never done? The questions about Stevens’ fitness for the position are relevant, but less pressing than what the move says about the direction of the franchise.

He’ll have help. The continuity he’ll bring to the position, which C’s governor Steve Pagluica stressed, could prove helpful. It’s also unclear if Ainge’s basketball career is over and whether Stevens is truly done with coaching only eight years into his NBA career, casting some doubt about whether this was a plan or scramble.

Ainge became GM at 44, so Stevens could be finished too. The difference is Stevens would seemingly be in demand for any head coaching vacancy in coming years. He oversaw significant successes and relative consistency in Boston, so why would he be reassigned in the first place?

A young head coach you love would not typically be removed to head basketball operations, nor would one you don’t love. It’s hard to not look at the money and years on Stevens’ deal as a motive. If Ainge informed the Celtics of his retirement in March, as Mark Murphy reported, it’s unlikely Boston inked Stevens to a six-year deal envisioning him as the executive-in-waiting. His Celtics remained a contender that showed upward trajectory through 2019-20 before a strange Bubble and pandemic campaign.

“This is a chance to get a new and fresh voice,” Stevens said. “This will be fun. This had nothing to do with where I was with coaching. Coaching has been very good to me.”

As the Celtics raved about how Stevens will be a GM that’ll understand coaching and Stevens exclaimed his willingness to do anything ownership wanted, he hadn’t sorted out the fate of his coaching staff, including Jay Larranaga, Jerome Allen and others.

One theory on why Boston would retain Stevens as GM while removing him as coach held that they could lose him in hiring an outside executive who wanted in a different coach. The problem still exists here if Stevens hires an outside successor.

Larranaga emerged as an early betting favorite to succeed Stevens and Marc Spears reported the Celtics would interview Allen. Stevens, the consummate professional, may be giving them their fair chance. Hiring one makes less sense under the need for a different voice theory. Thrusting Stevens from a position where he succeeded into an unknown one just to promote his former assistant to head coach wouldn’t make this organizational shift more understandable. Unless money is the motive.

Could Stevens be a placeholder? As he determines his next career move and the Celtics await a way to potentially offload his contract, another team could eventually hire Stevens and take his contract. That may not be their explicit intention, but could end up being the result if Stevens decides to coach again, which would not be stunning at 44.

Boston could position a right hand man in line and in accordance with Stevens. It could be Mike Zarren, Austin Ainge, or an outsider. This route would only succeed with the long-term charted out, since the difficult decisions will fly at Stevens furiously.

Robert Williams III is extension-eligible. So is Marcus Smart, who is also a potential trade option. Kemba Walker’s future is uncertain after getting injured late in the season after a year where he sporadically played. The team has little-to-no financial flexibility. Evan Fournier is an important free agent to retain and if money is an issue, the Celtics could make it impossible to keep him as they approach the luxury tax without him.

Three of Ainge’s final moves as GM set up the difficult position Stevens assumes. He signed Walker to a four-year deal, extended Stevens, then used most of the Gordon Hayward TPE on Fournier and his expiring contract. It’s critical that Stevens is in this for the long-haul to rectify this situation. GM isn’t a position to take a year off from coaching in, it is strenuous in its required foresight. Thinking 5-to-10 years down the line is mandatory.

Love or hate Ainge, his 18-year Celtics career proved enormously successful. His 66 trades largely hit, his draft picks changed the direction of the franchise and he delivered a 2008 title from the previous year’s worst team in the league. He held firm to philosophies and often zigged when the league zagged.

Who will Stevens be as GM? Will he mimic Ainge? Will he aggressively shop Boston’s future draft assets? Will he commit to Jayson Tatum and Jaylen Brown as a tandem? Wednesday revealed little on that front.

How important does he feel potentially trading Walker could be? Or will he play it conservative and run it all back? Finances might render that last option unlikely, so we’ll learn fast what Stevens thought of the roster as coach, and how much Grousbeck will pay.

“One of the benefits of moving into this role is I have a good idea of what we do and don’t do well,” Stevens said. “And what accentuate some of our best players.”