Muggsy Bogues Opens Up About Inspiring a Generation, Being Shot & Reggie Lewis’ Legacy

How Undersized Guard Muggsy Bogues' Trailblazing NBA Career in the 90's Inspired Steph Curry, and a Generation of Point Guards 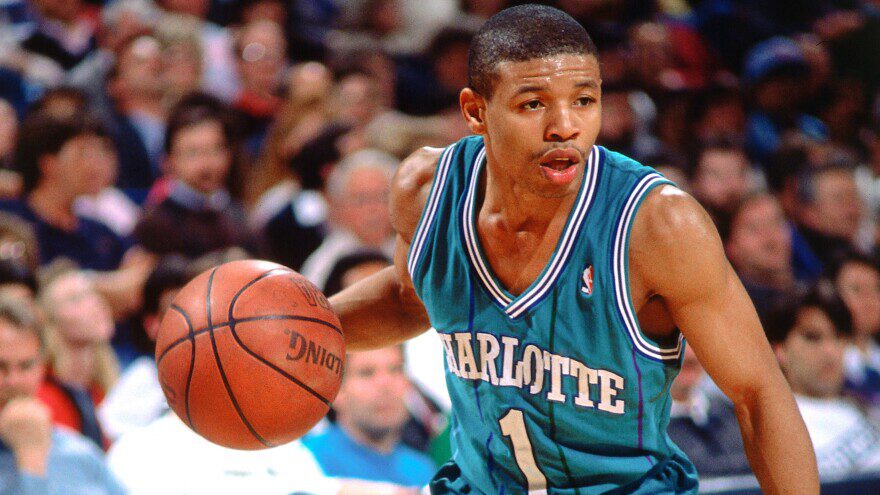 For Tyrone “Muggsy” Bogues, overcoming adversity began at a tender age when a life-threatening moment shifted his trajectory to unforeseen heights that seemed unattainable from his Baltimore vantage point.

At 5-foot-3, “Muggsy” was selected 12th overall in the 1987 NBA Draft by the Washington Bullets before carving out one of the most unique playing careers the association has ever seen. Bogues played 14 seasons, ten as the leader of the Charlotte Hornets, averaging 8.8 points, 8.8 assists, and 1.7 steals a game.

He’s the Hornets franchise’s all-time leader in steals (1,067). Muggsy also changed the perspective of many young and inspired fans who watched an undersized guard survive in a league full of 6-and 7-footers, thriving as a pesty defender and an assist-driven everyday starter for most of his career.

Two of those impressionable kids were 2022 NBA Finals MVP Stephen Curry and his brother Seth Curry of the Brooklyn Nets — the sons of Dell Curry, Bogues’ close friend and longtime Hornets teammate. Dell and Bogues also played for the Toronto Raptors during Muggsy’s final season.

In his new book, “Muggsy: My Life from a Kid in the Projects to the Godfather of Small Ball,” Bogues opens up about his troublesome upbringing, which included getting shot before he turned 6, playing alongside the late Reggie Lewis at Baltimore’s infamous Paul Laurence Dunbar High School and influencing the NBA’s most excellent 3-point shooter.

Bogues recently sat down for an exclusive conversation with CLNS Media. The following interview has been edited for length and clarity.

Pavón: So, take me through the process of telling your story. How did this whole thing come together?

Bogues: Talking about it and just brainstorming, I did one in 1993-94 when my father and one of my good friends, Reggie Lewis, passed away. And that was at the beginning of my (NBA) career, and people were interested in what kind of went into my journey up until that point. But this one, you know, it has been 20 years since I’ve been out of the game. The game has changed so much, and grateful for (the) evolution of the game. But I think I wanted to put something positive out there, especially when the pandemic was going on. A lot of folks (were) home, down, lost their jobs, and so forth; just didn’t have the same confidence that they probably once did.

I just wanted to put something positive out there, just give people an inside into the hardship that I had growing up, in terms of overcoming not just in my neighborhood but just the belief that folks didn’t believe that a kid my size was capable of playing a game that they thought was meant for bigger and taller players. And then I talk about relationships with the players I played with — Alonzo Mourning, Tracy McGrady, Vince Carter, Larry Johnson, Dell Curry, Charles Oakley. As well as the current players today; Stephen Curry and Chris Paul.

Pavón: Growing up in Baltimore, you went through a lot. You went through what most don’t go through, that kind of upbringing. What was that like, and when did you consider the NBA a realistic goal?

Bogues: Basketball was it; that was my safe haven. You know, all the stuff that was happening outside of the game, of course, a lot of it was negativity. But having people in your corner, people in the neighborhood, knowing what my mission was, and knowing I wanted something to do with basketball, they kind of shielded me from the negative things that could have happened to me. But I was so grateful for having those types of people that were around in our neighborhood. (After) getting shot at an early age, I kind of had my mind set at a different pace. Growing up in that city, many of us had a life expectancy of pretty much 20 years old.

Basketball was something on our minds that gave us a vision that there was something more outside, and this was a way that we could kind of get to the things that we wanted in life. This round ball can get us that, and we just took it step by step; we looked at it as a possibility to get a scholarship and go to college. Being able to be on that team at Dunbar, having the type of talent we had, all that stuff became a reality, that it was about to happen for me.

Bogues: Yeah, that was a special time in our lives where we were fortunate enough to all live around one another and want to go to the school that we had so much history from your families or your neighborhood, and so forth, before all these schools out here now start to recruit. We had to be in that area, and it became a citywide school. Then, on that team with myself, the likes of the late Reggie Lewis, David Wingate, Reggie Williams, and others, as well as Mike Brown and some of the guys that were not very noticeable, but we had so much talent that all 15 of us was able to get a Division 1 scholarship.

Pavón: Tell me about the day you got shot; what do you remember from it?

Bogues: I was about the age of 5, just being outside at the wrong place at the wrong time (and) watching a fight take place. A kid took a rock and broke a store owner’s window. The store owner came running out of his store, ran straight to his shed, and grabbed his double-barrel shotgun. Of course, all of the kids scattered; we all ran. For me, when I ran, I slipped, and he just started firing. Luckily, the bullet missed my head, but then all of the buck shots went and hit my arms and my legs.

Waking up in the hospital, knowing that (I was) still here — at the time, not knowing the severity of it — I was just thankful. That mindset after recovering from those buckshot wounds, I recall going back to the basketball court, where those kids used to make fun of me and laugh at me when I was a kid for being so small; they really knew how to play the game at the time. I know when I went back there and heard that same criticism, those same jokes they used to hurl at me just didn’t have the same impact… I think that was the beginning of my process.

Pavón: While playing for the Charlotte Hornets, you met one of the greatest shooters ever, but he was just a kid; the son of your teammate Dell Curry. How incredible has it been to see Steph Curry’s story continue to unfold?

Bogues: It’s unbelievable that I’m witnessing it all, seeing what Steph has become, watching the maturation of him and Seth Curry. It’s remarkable; it really truly is. Steph always had that; he “just wish he get to 5-foot-3, then he knows he can make it to the NBA.” (laughs), and to know I changed the perception of a kid that knows he doesn’t have to be 6-feet tall in order to play in the NBA. That was heartfelt for me.

What (Steph) has become, how he’s able to conduct himself on and off the floor, and all of the accolades he’s obtained thus far are mind-boggling. It truly is. Four-time NBA champion, (Finals) MVP, two-time MVP, I mean, it’s just ridiculous all of the stats and accolades I just mentioned he’s accumulated at this stage of his career. No one thought at the age of 4 when I was getting on that plane ride in that video — they always show in the locker room — that I was holding the greatest shooter to ever lace them up in the NBA.

Pavón: For me, while growing up in Boston, the death of Reggie Lewis cast such a dark cloud over the Celtics organization. I never watched Reggie; I was really young when he passed. What was he like as a player? And, as a friend, how was your relationship with him while watching him blossom into an NBA All-Star years removed from high school?

Bogues: Reg was so smooth, man. Growing up, he was such a quiet kid, all the way up to adulthood. He wasn’t that vocal, but he became the leader of the Celtics, of course. Reg had so much skill to his game; his skillset was off the charts… (Reggie) had it all, but when he went to (Northeastern), he took it to a whole new level. He was able to be his own, come out of the shadow of us (Dunbar) and show everybody in the nation that he is one of the best skillful players ever to lace them up and display that. He became the first All-Star among all of us. Having Boston on his back, the leader of that historic franchise, I mean, what more can you ask for?

That was such a special moment for him and his family… (Reggie) was on the top of his game, on both ends of the floor. He used to give MJ (Michael Jordan) trouble when he played against him. That’s how far he used to come with his game, and he was a superstar in the latter part of his years in the NBA.

Bogues: Jaylen Brown favors Reggie a little bit in some aspects of the game. Reg wasn’t always shooting threes, but he was capable of shooting; he’d knock some down. He’d shoot them pretty regularly; midrange, first-step, get to the basket, around there; that was him. Just the way he moved, his movement on the floor was effortless. You never could speed him up; he always played at his pace.

Pavón: I’m sure you were rooting for Steph Curry and the Golden State Warriors a few months ago, but in your opinion, how close were the Celtics to winning the 2022 NBA Finals? What went wrong for Boston?

Bogues: It was the lack of experience. Every team and everybody knows that you gotta have some kind of adversity; you gotta go through that in terms of understanding how to get to the next level, and Golden State they have been there and done it so many times. I think they just had a little more of that understanding of how to continue to stay engaged and not get too up when (they) win or too down when (they) lose, and having a guy like Steph as the leader, I felt like they had that edge. I love Jayson Tatum. I love Jaylen Brown, Marcus Smart, (Al) Horford, and all those guys.

I thought Boston had the better team at the time overall because of the things that they bring to the table defensively. But then Golden State played defense as well and had that little marksman in Steph. He just let everybody know he’s the best player on the floor, and that was something hard to maintain… But I think Boston learned a lot from it, and I think the two main guys will be better moving forward.

“Muggsy: My Life from a Kid in the Projects to the Godfather of Small Ball” is available now.

Click here to listen to this interview in its entirety.