The AFC East is currently the Bills world - we're all just living in it. 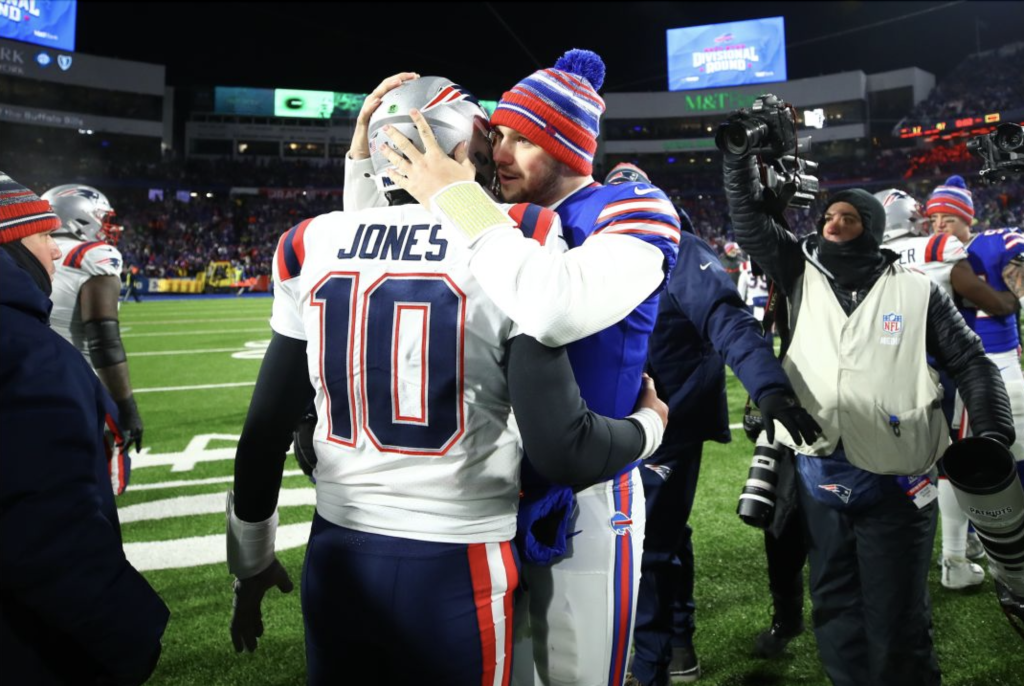 It’s time to get excited folks, as we are just one week away from veterans reporting to Patriots 2022 training camp.

New England’s rookies reported to Gillette Stadium on Tuesday, giving the fifteen first year players a chance to get their feet wet in the NFL.

Before we get into it – I have to say both a farewell and a congratulations to Evan Lazar. Evan has been covering the Patriots beat for CLNS Media for the last four seasons, and on Monday he announced that he will be moving on from the network.

Evan is undoubtably one of the best writers on the beat, and he will be truly missed by CLNS. He taught me a ton – from both up close and afar, over the last year and I look forward to seeing where he lands next.

Now – back to the show. How will the Patriots fare this season? Can they even compete in the AFC East? Here are BetOnline.ag’s odds on who will win the division:

As I wrote in my subtitle – this division is Buffalo’s world, we’re just living in it. The Bills are far and away the best team in the AFC East. Josh Allen is a top three quarterback, Sean McDermott is a high level head coach, and Leslie Frazier has put together a dominant defense.

Can the Pats at least pull one win out against Buffalo? It isn’t very likely according to BetOnline. Here are the odds for their season series:

The oddsmakers have the most likely scenario as a clean sweep by the Bills. Both of these games take place from week 13 on – as they face off in New England on Thursday, December 1st and on the final Sunday of the season in Buffalo.

In my waaaaaay too early schedule prediction, I had the Pats losing both games to the Bills. I still believe this to happen – so (-130) is a good bet to me.

So… what about the Dolphins? Can they get some AFC East wins against them? Here’s the series price:

Between the Brian Flores saga, the Tom Brady/Sean Payton rumors, and the signing of Tyreek Hill – Miami was the center of the NFL world this offseason.

Their biggest move, however, may have been the hiring of former 49ers offensive coordinator Mike McDaniel. Coming from the Kyle Shanahan tree, McDaniel was the brains behind a dominant San Francisco run game over the last several seasons. The Dolphins have plenty of speed in Hill, Jaylen Waddle, Raheem Mostert, and more that McDaniel can use to his advantage. Miami should have a solid season.

I think the Pats and Fins will split their season series (-110).

Now onto the Jets:

According to BetOnline.ag, the most likely outcome here is the Patriots sweeping the series.

Jets QB Zach Wilson has been in the news lately, but unfortunately it’s been for all the wrong reasons. Rumor has it, the second year player out of BYU has been sleeping with his girlfriend’s mom – which ended his relationship with said girlfriend…

Anywho! New York had a solid draft in May – coming away with CB Sauce Gardner, WR Garrett Wilson, and DE Jermaine Johnson in the first round. The time should be now for the Saleh/Wilson administration. There isn’t an excuse.

Though I think these will both be hard fought games – the Pats will sweep New York this season (+120). The J-E-T-S Jets, Jets, Jets may, once again, be a season away.

As I said above, the Patriots veterans will report to Gillette in the middle of next week. I will be in Foxboro Wednesday, Thursday, and Friday bringing you all the latest from Pats Camp. Follow along!