We preview three games to watch across the NFL, powered by BetOnline.ag. 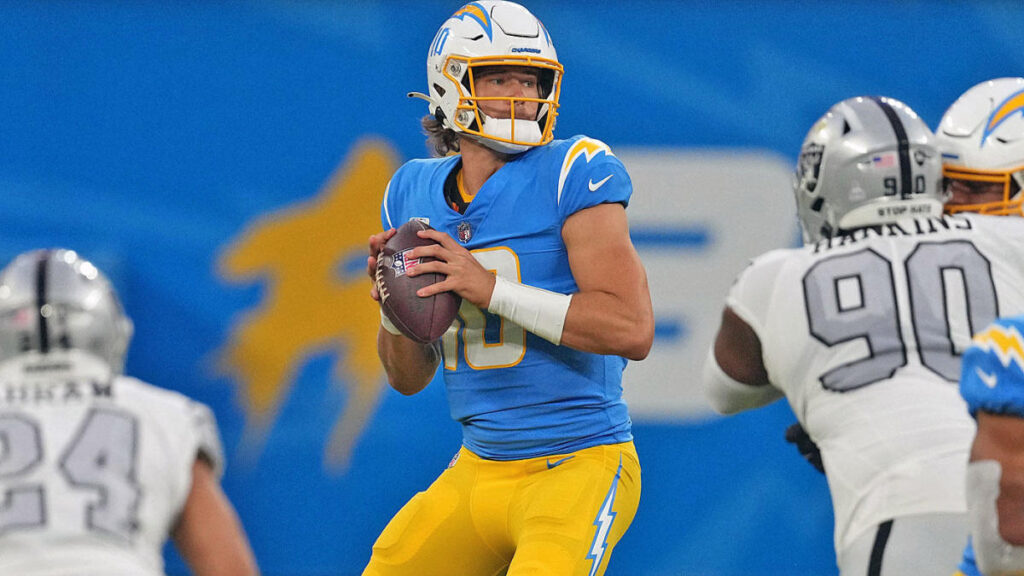 Although I’m still doing my best to try to get over Nick Folk’s doink on Sunday night, it’s officially time to move on. Week five has begun and we have another excellent couple days of football ahead of us.

Let’s take a look at three games to watch this Sunday, with odds and predictions from our exclusive wagering partner, BetOnline.ag

From here on out, any time you get an opportunity to watch Justin Herbert you have to do it. The kid is outstanding. He can make every throw on the field and makes it look effortless. The Chargers also have a multitude of weapons on offense in Keenan Allen, Mike Williams, and Austin Ekeler that make Herbert’s job that much easier. First year head coach and former Rams defensive coordinator Brandon Staley is already winning over the city, others across the NFL.

On the other side of the field however, is the Cleveland Browns. Cleveland has played consistently good football ever since Kevin Stefanski stepped on the sidelines for them. Myles Garrett is playing at a Pro Bowl level on the defensive line, and the one-two punch of Chubb and Hunt in the backfield makes the game incredibly easy on quarterback Baker Mayfield. Both of these teams are going to be problems in the AFC for a long time.

CLEVELAND! THIS IS FOR YOU! (insert LeBron James gif here) The Browns simply have more experience, and will gut out a road win in LA. The one point line confuses me, so I’m going to ride it in a potential let down spot for the Chargers.

Imagine if a year ago I told you Eagles vs. Panthers would be a game of interest across the NFL? Well folks – that’s exactly what we have this week as the bird’s head to Carolina for a showdown against Matt Rhule’s 3-1 ballclub. Offensive coordinator Joe Brady has unleashed a completely new quarterback in Sam Darnold and has the offense clicking on all cylinders.

As for the Eagles, although Jalen Hurts may not be the best passer, he has legs that compliment his game and makes Philly’s offense exciting to watch. This game will be a good watch no matter who’s on the field.

This might be a chalky pick, but I’m going with the Panthers in this one. Although they’ll likely be without Christian McCaffrey for a second straight week, I think Darnold will continue trending up as the season goes on. Unlike most, I love Eagle’s coach Nick Sirianni’s attempt at swagger, but talent trumps attitude. Panthers win easy.

Despite the 49ers announcing today that quarterback Trey Lance will make his first start in place of the injured Jimmy Garoppolo, the spread has stood still at 4.5. The rookie signal caller has quite the debut ahead of him as San Francisco travels to Arizona to face MVP candidate Kyler Murray and the 4-0 Cardinals.

Murray has been electric all season, with 12 total touchdowns in the teams first four games. Head coach Kliff Kingsbury, who was presumably on the hot seat heading into the season, has Arizona playing lights out football thus far.

Lance, who has seen spurts of action thus far, certainly has his work cut out for him on Sunday. The 49ers have had a sporadic 2-2 start this season, and that will more than likely continue this weekend.

Kyler stays hot, and gets Arizona to 5-0. I think we will see flashes out of Trey Lance in Kyle Shanahan’s offense, but he still needs time to learn and grow before being a pro caliber starter. I also I don’t think Jimmy Garoppolo will play for 49ers on Sunday’s again. As coach Shanahan would say however, who knows if we’ll even make it to Sunday.