The Panthers and Patriots fought for a second consecutive day at practice, undermining progress both teams hoped to make in the joint sessions. 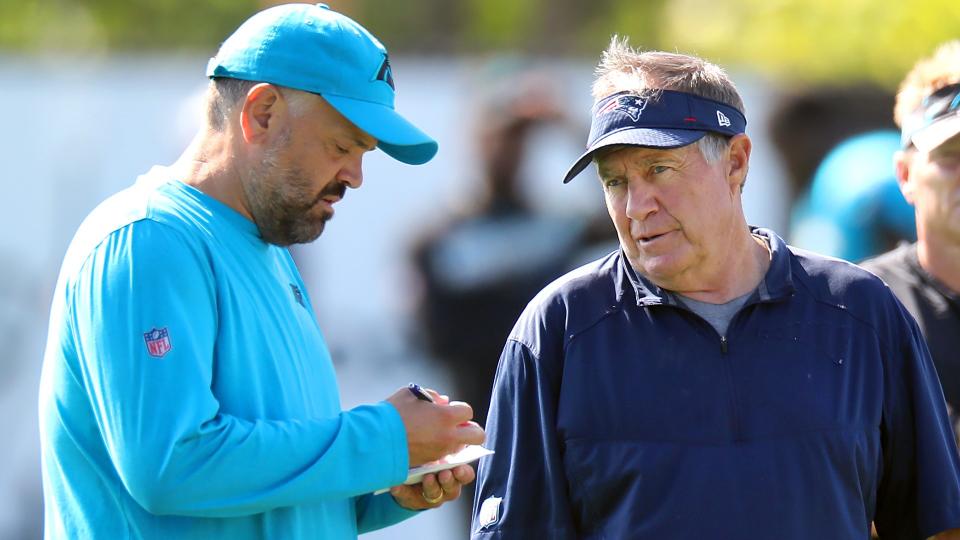 FOXBOROUGH — Less than an hour into the second join practice between the Panthers and Patriots, Ty Montgomery stood on the field opposite of a brawl breaking out for the second day screaming that it’s just practice.

Matthew Slater stood face-to-face with Kalon Barnes. Slater wasn’t going fight, he quipped, with his four kids and wife in the stands. Even as both sides chalked the tensions up to normal training camp escalations, multiple key players got ejected again, and Slater acknowledged the lack of discipline as an issue.

“When we’re in a game situation, we can’t have the type of issues that we’ve had this week,” Slater told CLNS Media. “It’ll cost our team, so I think it’s a time for us to kind of refocus and get back to playing football. We’re not MMA fighters, we’re not Mike Tyson, we need to come out here and play football and certainly our emotions ran hot and high. We needed to reel that back in and get back to execution, playing with good, positive energy, playing together. I think coach did a good job of refocusing us. Coach (Matt) Rhule obviously did that on the other side. That doesn’t mean playing without passion, it just means playing with control.”

Carolina and New England began the afternoon with one-on-one action that Mac Jones, Jonnu Smith and the Patriots’ defensive backfield shined in on opposite fields. They moved to live kickoff drills after, which Rhule noted are normal parts of joint practices where players don’t hit each other. Five returns went well. A sixth went awry, with Patriots receiver/special teams veteran Kristian Wilkerson, who got laid out by a block and stood over by Kenny Robinson.

The two teams scuffled and quickly separated, Robinson already having been involved in Tuesday’s fight with Kendrick Bourne and Wilkerson. The two teams separated to opposite fields for seven-on-seven action, starting with a Christian McCaffrey rush. Deatrich Wise Jr. laid a heavy hit on McCaffrey along the sideline, who threw the ball back at him and an all-out brawl broke out along the sideline. The hour of scuffling only delayed productive sets between the two sides, but followed a frustrating training camp for New England as they try to ramp up following the slower-than-usual progression into full speed practice.

It took several minutes for the sides to separate. Wise and Panthers running back Chubba Hubbard got ejected, Rhule indicating that the officials saw Hubbard throw a punch. Carolina sent Robinson to the locker room following the tensions, and are now weighing his future with the team. Both squads huddled, with Rhule telling the Panthers that one more scrum would lead the coaches to cancel practice. A fan reportedly got injured during the fight, which pushed right up against the stands.

“It’s unfortunate that a day of so much good football,” Rhule said. “I know the storyline will obviously be a lot of what happened. The decision of two guys impacts a lot of people. Number one, my thoughts are with the woman that was hurt over there. I’m hoping that she’s ok … then obviously we sent Kenny off the field. I didn’t really see the hit, but I did see him standing over the player and that’s not how we want to practice. Things happen in football, there were some good clean hits, but we don’t stand over someone and taunt them. It can affect their livelihood, so we sent him off.”

Wilkerson got carted off, Slater saying he’s being evaluated off-site, following injuries to Hunter Henry, Isaiah Wynn, Malcolm Butler and Joejuan Williams earlier in the week, furthering pressuring a Patriots team making progress, but evidently behind where they want to be offensively. Jones stormed into seven-on-seven action finding Smith and Nelson Agholor from the red zone for touchdowns, Agholor uncorking the tension with a spike. Jones rushed into the end zone for a pair of scores, but on the opposite field New England’s defense struggled to contain McCaffrey and D’Onta Foreman rushing in place of Hubbard.

Jones thrived without pressure, rushing Tyquan Thornton after his final touchdown pass of the session, but New England grew uneven into 11-on-11 action. He finished completing roughly 50% of his passes, rushed into a few overthrows and throwaways. Rhamondre Stevenson’s catches made up most of the back field’s productivity, while the two-minute drill struggled to the point where New England needed to move up from mid-field to the 10-yard line to get some red zone repetitions in. Jones hit DeVante Parker in the front of the end zone and found Ty Montgomery in the same location for a two-pointer. Progress, Jones noted, though still far from where the team wants to be on that end.

The Panthers responded with a strong Sam Darnold drive, while Baker Mayfield ran out of time in the red zone. Carolina’s players shook off the hostilities, but Slater still sounded hot after the conclusion of practice, saying that there’s a way to approach these environments compared to games that the Panther crossed.

“(Slater) gets going,” Devin McCourty quipped. “I know how you guys see him here. Kickoff, kickoff return, he gets going, and when he gets going you can imagine, guys see the oldest, one of the oldest guys get going. Listen, it comes down to being in there with your teammates, I think that’s how every individual on this team is. Something gets going, listen, they’re the same way. That’s why almost everything that happens, you guys seeing it looks like a big scram because every player goes in there to make sure that another player’s safe. It’s a part of it.”