Patriots Warm Up for Panthers Joint Practices as Cuts Loom

The Patriots and Panthers will begin joint practices on Tuesday with New England coming off a long string of slower action or rest days at training camp. 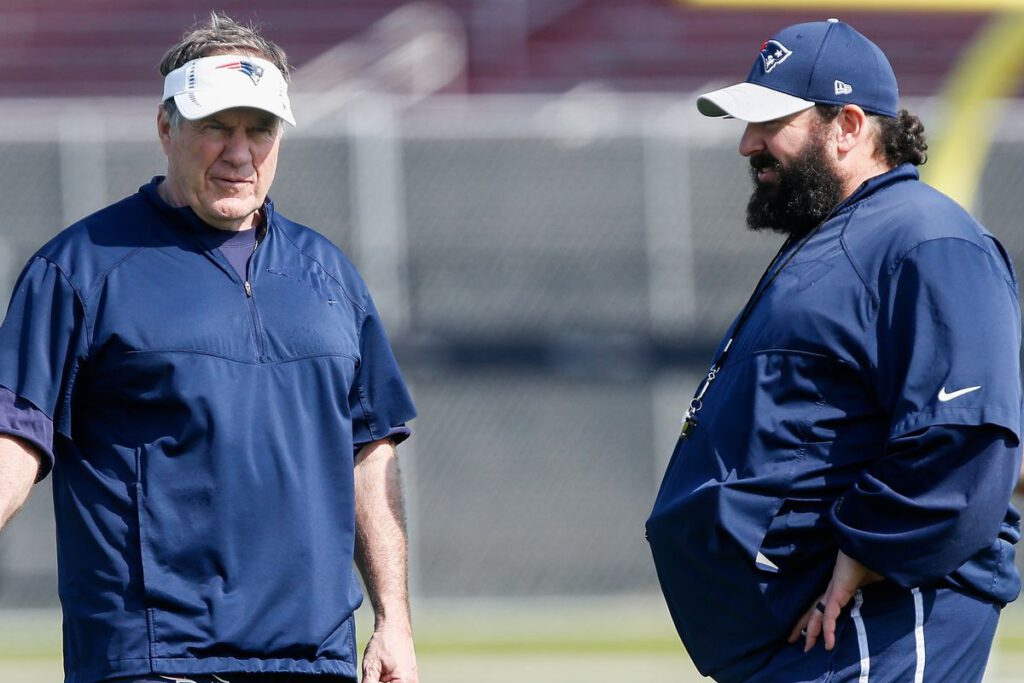 FOXBOROUGH — The Patriots practiced in shells and shorts for a warmup before joint practices that bordered on sleepy early then turned up into some competitive repetitions in 11-on-11 later in the afternoon on Monday. After another weekend off following the preseason-opening loss to the Giants, Bill Belichick’s slow ramp-up as he assesses his offensive coordinator position and implements new offensive philosophies will transition quickly into competitive practices against the Carolina Panthers on Tuesday and Wednesday.

“I don’t know, I feel like every year training camps have been different, ” David Andrews said of this summer’s schedule. “I’ve had different off-days, I’ve had two days off in a row, one day off … it’s all been different, walk through some days. Whatever (Belichick) decides is kind of what it is, and for players, it’s our job come out and be ready to play. Whether it’s practice at 4 (p.m.) one night, we’re up the next day, that’s just what it is. It’s training camp, I don’t know all the science behind it.”

Whether to avoid early-camp injuries or slow down for an offense that’s been challenged and frustrated at times by New England’s defense and adjustments to the run scheme, the Patriots have now taken multiple weekends off with other days spent outside of pads. Belichick, the players and staff also mentioned the monotony of intra-squad play reaching its peak, with the Carolina sessions a way to break that up. After the first session between both teams on Tuesday, a round of roster cuts loom, with teams forced down to 85 players before 4 p.m.

“There are so many things,” Belichick said previewing joint practices. “The individual matchups are good, we’ve been working against each other for a long time, so new individual matchups, the schemes are different, so we’ll see some different Xs-and-Os, but also maybe techniques on the way. Guys pass rush and route-running, things like that, and just I would say less predictability in practice where we kind of know what’s on the other side of the ball and what we can and can’t do, and some things that we are and can see from the opposite side of the ball. With a new team, everything’s kind of new, so it kind of keeps you on your toes, forces more communication and more awareness, and we need that.”

That communication improved mildly with timing between quarterback Mac Jones and his array of receivers evident. Jakobi Meyers caught multiple balls along the sidelines, Nelson Agholor and DeVante Parker snagged flashy touchdown passes in the corner of the end zones, while Jonnu Smith showed to be a consistent factor in the flat. Agholor later beat defensive backs Jack Jones and Devin McCourty over the top for a second score later in the session. Tight end Hunter Henry ran free to catch several balls as well.

With that said, the defense didn’t turn up the heat on Jones until later in the practice. He nearly threw an early interception that got dropped early in the session, while pressure from the Patriots’ defensive line forced several long passes over receiver’s heads before the team concluded a roughly two-hour session. The 11-on-11s also featured a pair of false starts, Jack Jones broke up a pass and Jonathan Jones moved to the outside in coverage. The back field didn’t make much noise, Damien Harris leading the back field in carries, Rhamondre Stevenson splitting work and wide receivers Ty Montgomery and Tyquan Thornton sneaking into the end zone with carries in the shorter yard situations. Smith also got limited work carrying the ball out of the backfield.

Belichick’s staff revealed little more about the lack of a named offensive coordinator. Matt Patricia and Joe Judge shared play-calling duties along with their positional work as offensive line and quarterback coaches. They only collectively agreed there is no battle or sense of competition over the role. The process, Belichick noted, continues and he said doesn’t have enough time to explain beyond that. Defensive coaches Steve Belichick and Jerod Mayo quipped about their lack of titles, Mayo saying he doesn’t even have a business card.

The Panthers enter on Tuesday morning with a prolific run game led by Christian McCaffrey, a quarterback battle between Baker Mayfield and Sam Darnold, along with a defense that ranked second in total yards allowed in 2021. Belichick lauded his relationship with head coach Matt Rhule, who’s entering his third year leading the team.

“The biggest thing for us right now is we’ll still talk about fundamentals,” Patricia said. “We always talk about that here, great plays start with great fundamentals, and this’ll be a good opportunity for us to see our fundamentals and our techniques against maybe a little bit of a different style of play. You go against each other for so long, and I think that’s one of those things about the joint practices, since we started incorporating those things a long time ago, have been great. You kind of get to that point in camp where guys are probably tired of hitting each other after a while, and they understand different calls and line of scrimmage things, but now we can actually go against a different opponent, competition is great, and then we can also take a look at our fundamentals from that standpoint. That’ll be a big evaluation for us.”