For the first time in a long time, the Patriots have an abundance of talent at wide receiver. How will they trim the fat? 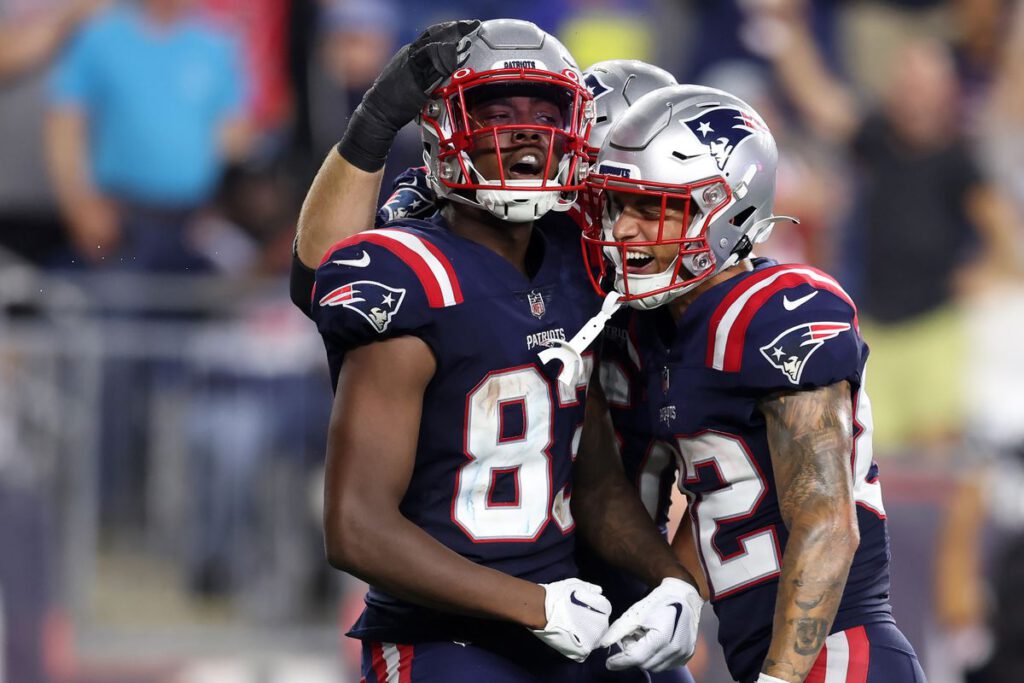 The Patriots will have some major decisions to make coming up, as NFL rosters have to go from 85 players to 53 players in a matter of weeks.

Though Thursday night’s game against the Giants was a start, as it got live football on film for the first time in 2022, there’s still plenty of time for buried guys to shine and one’s on the fringe to hop over the ledge.

With several joint practices and two games still to come before cut-down day, here’s my best crack at where I think the Pats roster will be come week one:

I originally planned for Brian Hoyer to be cut, but then found a nugget from our friend Miguel Benzan at Pats Cap who outlined that cutting Hoyer actually increases his 2022 cap number by $1M since $1.4M of his 2023 salary would hit the 2022 cap, and that money is fully guaranteed.

As such, they’ll want to play roster management and cap management, and stick with Hoyer.

I do think, however, if push comes to shove – Bailey Zappe is the team’s backup QB. He’s earned it. If they do end up cutting Hoyer, he’d be a practice squad candidate immediately.

Damien Harris, Rhamondre Stevenson, and Pierre Strong Jr. are virtual locks to make the roster. The fourth and fifth spots are where it gets dicey.

J.J. Taylor has been a fan favorite over the last several years in New England, but the emergence of journeyman Ty Montgomery playing the Swiss army knife role could make Taylor expendable. Montgomery didn’t play in Thursday’s game, which makes me think he’s on the fast track to make the team.

Although sixth round Kevin Harris scored a touchdown on Thursday night, he also averaged just 1.7 yards per carry. I have him on the roster for now, but he’ll have to show improvement over these next few weeks if he wants to keep that spot.

There are rumors that there is reportedly an “odd man out” in New England’s WR room – and I think it’s Nelson Agholor. The emergence of rookie Tyquan Thornton has been a breath of fresh air for just about everyone besides Agholor, who now seems to be a trade candidate. I think they’ll get something done before cut-down day.

I also think this is the year that both Tre Nixon and Kristian Wilkerson make the 53. They’ve showed out so far during camp and have proven to be NFL-caliber receivers.

Outside of Mac Jones, Hunter Henry is probably the player most locked into his roster spot on this team. He’s the security blanket of the franchise QB, he’s a dominant red zone threat, and he’ll be an integral part of the Patriots new offensive system.

Tight end #2 Jonnu Smith has caught my eye over the last several weeks. Though it’s only camp, he’s been far more involved in the offense and looks to be a benefactor of the new scheme.

Asiasi and Keene’s time in New England is finally over.

This is how I think it’ll shake out come week one: the starting five of Wynn, Strange, Andrews, Onwenu, and Brown – with a swing IOL in Ferentz and two swing tackles in Herron and Cajuste.

The only wrench will be health, as Herron and Cajuste both went down on Thursday night against the Giants. If they aren’t healthy, then it opens the door for guys like Durant, Hines, and Hambright to steal a spot.

Wise, Godchaux, Guy, and Barmore are the locks with the fifth spot is up for grabs – though I think it’ll end up being Henry Anderson.

Sam Roberts and LaBryan Ray have made a pop in camp and could compete for that fifth slot, but right now I think it’s Anderson who gets the nod.

This is Patriots most fluid positional group, as I think guys like Cameron McGrone and Ronnie Perkins still have a viable chance to make the roster. However, if a decision had to be made today, I don’t think they’d make it.

Both have been playing a majority of their time with the scout team in camp. They’ll need to make a push by early September if they want to make the 53.

I said it on Thursday night – though cornerback is the position I’ve been most worried about during Patriots camp, so far, they completely impressed me against the Giants. Every one (besides Joejuan Williams) made a plus-play that looked like it could be made on an NFL Sunday.

The emergence of rookies Marcus Jones and Jack Jones will end up pushing Malcolm Butler off the roster. There’s more value in keeping guys like Shaun Wade and Myles Bryant than the aging Butler – especially if you can rely on two rookies to take snaps.

Safety is this team’s strongest group and the one I am the least worried about. McCourty, Phillips, and Dugger is a dominate 1-2-3.

Remember when I said linebacker is the most fluid? Well that’s the reason Joshuah Bledsoe will make the team. If they can find a way to play Peppers in the box, which I think they will, then that opens up a spot for Blesdoe to sneak onto the final roster.

This one speaks for itself. The typical specialist make it, and the camp kickers and punters don’t.