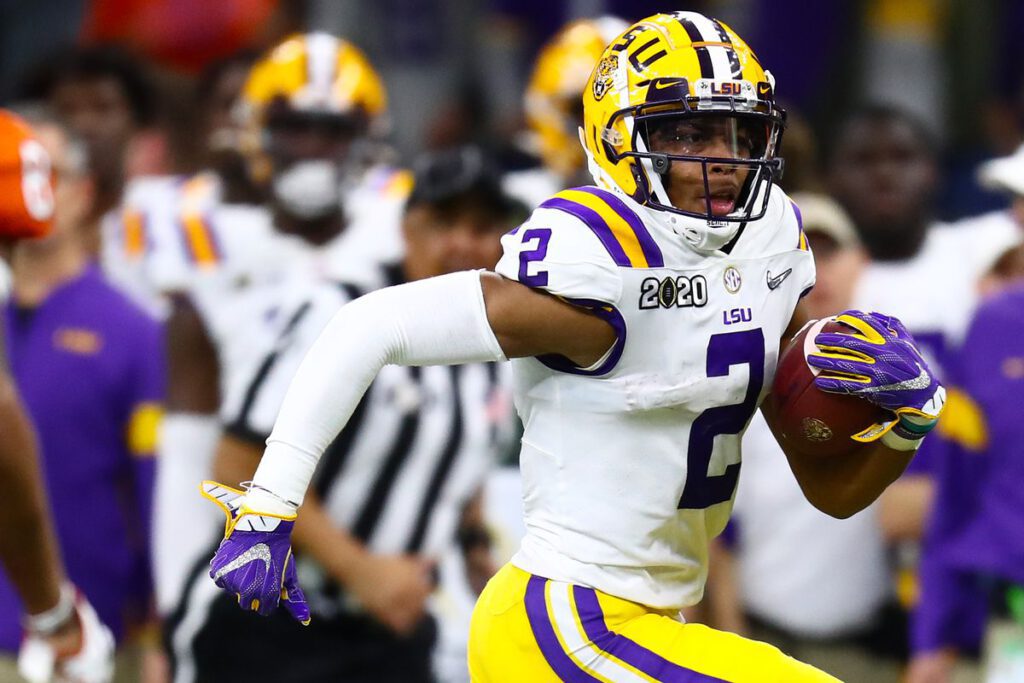 The Patriots will once again be in the market for offensive firepower as they transition away from Tom Brady and into the Jarrett Stidham era.

As we wrote in our Mock Draft 3.0, New England’s roster as currently constituted doesn’t give Stidham enough weapons to succeed or realistically compete in this season.

With that in mind, here are the best fits for the Pats in a loaded wide receiver class:

Background: The LSU wideout had a stellar final season for the Tigers leading the nation in receptions and yards from the slot while forcing 23 missed tackles after the catch. Then, he went to Indianapolis and ran a 4.43-second 40-yard dash, solidifying himself as a first-round selection. Jefferson has an intriguing combination of advanced route-running technique and athleticism to win at all three levels of the defense.

How He Wins: Jefferson might be at his best working through underneath coverages with impeccable pacing, spacing, and separation quickness to uncover on Edelman-style options routes. But he’s also the best over or crosser route-runner in the class, which is where he can create big plays in the pros providing a horizontal stretch to an offense. In the play above, Jefferson uses a “stair-step” to stack horizontally coming across the field. His explosiveness and fluidity cause Oklahoma safety Pat Fields to lose his footing, and Jefferson picks up big yardage.

Background: Mims has been a nightmare for Big 12 defense over the last three seasons, culminating in a 1,020-yard campaign to go along with 12 touchdowns in 2019. The Baylor wideout had a terrific Senior Bowl week where his explosiveness and physicality was difficult for just about every defensive back in Mobile. At the combine, Mims tested in the 98th percentile. An elite athletic profile, great three-year production, and a rare combination of size and explosiveness make Mims the perfect receiver prospect.

How He Wins: Mims’s consistent wins come either separating with short-area explosiveness in his vertical breaks against off-coverage or stacking vertically to win over the top against press coverage. On the first play, Mims uses a hesitation release to get the corner to open his gate at the line of scrimmage, presenting a pathway to the sideline. He uses that space to open up his explosives strides to win over the top. Then, Mims uses a subtle armbar to prevent the corner from getting back into the play and hauls in the touchdown. On the next play, Mims is facing off-coverage at the top of the screen, so he uses his speed to get on the defender quickly, then takes a violent step outside his frame towards the sideline to get the corner to move over (rocker step), and accelerates through the break to create separation at the top of the route.

Background: Jefferson didn’t participate at the combine due to a foot injury, but Senior Bowl executive director Jim Nagy tweeted that he was the fastest player clocked in Mobile. The Florida wideout had modest production over four collegiate seasons, but he is as advanced as a route runner as I’ve studied at the college level. Some of that comes from his father, Shawn, who played 13 NFL seasons at wide receiver and is now an assistant coach with the Jets.

How He Wins: Jefferson’s release game is exceptional due to his ability to move defensive backs off their spots, stack moves together, and explode out of his release. In his matchup against future first-round pick Derek Stingley, Jefferson won handily, with eight catches for 73 yards. On the play above, Jefferson’s (bottom of screen) first step resets the line of scrimmage to move Stingley inside, opening up more space for Jefferson to operate along the sideline. He then adds a foot-fire release on top of the inside move and explodes into his route. From there, Jefferson could work to stack vertically, but instead, he allows Stingley to catch up to him, then slams on the breaks to adjust to a back-shoulder throw.

Background: Claypool is an absolute freak athlete scoring in the 98th percentile at the combine after posting 66 receptions, 1,037 yards, and 13 touchdowns for the Irish last season. The Notre Dame product grew up in Canada, taking to Facebook to post his own High School highlights to garner interest from FBS schools. Some, including myself, see Claypool as a move piece that should resemble a tight end more than a wideout at the next level.

How He Wins: Claypool wins mostly with athleticism and size due to his explosiveness, catch radius and leaping ability, and thick frame to wall off defenders. He doesn’t possess great short-area burst to separate on horizontal cuts against cornerbacks but might have better luck between the numbers against safeties and linebackers. Claypool’s rep above signifies that he can play that kind of role, and he has the body type to take hits over the middle. In the play, the defender is playing Claypool with inside leverage to force a fade pattern. However, Claypool nicely attacks the outside space in his stem, uses a violent rocker step to get the defender to move outside, and then breaks inside on the slant for the score. If the team that drafts Claypool leaves him as a perimeter receiver, most of his production will need to come from contested grabs. But if he moves around the formation, he becomes a matchup weapon that will be useful in the red zone.

Claypool is also a devastating perimeter blocker with highlight-reel plays and outstanding intelligence blocking in space. It seems lofty to expect a transition to an in-line tight end role, but he can be a factor in the running game.

Background: Due to a foot injury that he suffered during combine training, Edwards didn’t participate in Indy, but the expectation was that he’d run in the high 4.4’s at 6-3, 212 pounds. He is explosive while also possessing the frame to body defenders downfield both as a receiver and ball carrier. The fear with Edwards is a notable injury history, which includes his recent foot fracture, a 2018 meniscus issue, and a knee injury from High School. However, that could cause him to slide in the draft, presenting excellent value in the middle rounds. If he tested at the combine, Edwards would be a top 50 prospect in this class.

How He Wins: As we mentioned, Edwards’s speed, contact balance, and physicality as a ball carrier are elite traits that mirror what the Pats already have in N’Keal Harry in some ways. But he can win downfield as well passable route-running at this stage. Above, Edwards (bottom of screen) adjusts his route slightly against cover-three buzz to fool the centerfielder into thinking he’s breaking across the field. Knowing the rat defender rotated down into the area, Edwards gets upfield through his break to run behind the rotating defender. He runs through downfield contact before the catch, then displays excellent vision and contact balance to get into the end zone. He deserves more credit for his understanding of coverage rotations and spacing.

Background: Hill broke the Ohio State career record for receptions with 201 over his four-year career with the Buckeyes. Although he tested as a mediocre athlete, Hill is a Patriot-type player due to his work ethic, week-to-week consistency, and football IQ. Ohio State had more physically gifted receivers during his time in Columbus, such as Terry McLaurin or Parris Campbell, but it was Hill that set the career receptions mark and was the favorite of teammates and coaches.

How He Wins: At the combine, Hill told a group of reporters that Ohio State’s coaching staff adopted Julian Edelman’s route tree for the crafty wideout. Hill is a slot-only player due to his speed limitations, but he’s one of the best underneath route runners in the class, reading out option routes against man and zone coverage. His feet and transitions are electric, with plenty of acceleration through his breaks to create separation. On the play above, Hill reads out the defensive backs outside leverage, threatens in his stem aiming at the defenders’ outside shoulder, then uses a sudden crossover at the top of the route to come open. We could show you a million examples like that one.

Background: Patriots scouts loved what they saw from Proche at the Senior Bowl due to his highlight-reel grabs and smooth route running despite lacking ideal size, speed, and explosiveness. No, Proche isn’t the best of athletes and is likely a slot-only receiver, but he impressed scouts in Mobile and has the best hands in this class. At SMU, he posted back-to-back seasons with 1,100 receiving yards to go along with 27 combined touchdowns.

How He Wins: Proche is an accuracy eraser, catching off-target passes that he has no business grabbing. Although those receptions are fun to watch, his chain-moving ability will hopefully lead to consistent production at the next level. On the play above, Proche correctly reads out Tampa-two coverage to give his quarterback an easy conversion on fourth and six. The middle linebacker drops to play the deep hole, leaving space right over the ball for Proche to sit down and make the catch.

Background: Davis had some bumps and bruises over the years, but presents a bigger slot option that had passable two-year production after seeing Christian Kirk and others pace the Aggies’ passing attack for most of his career. Dating back to High School, the Texas A&M wideout trains with Rischad Whitfield in the offseason (also known as “Footwork King”), and his work with Whitfield shows up on game day where his short-area quickness is on full display.

How He Wins: Davis plays fast despite pedestrian testing speed and breaks off his routes with excellent pace and separation quickness. On the play above from the Senior Bowl, Davis shows perfect technique on an over route. First, he gets the defender to open his gate toward the sideline by getting into his leverage and gaining ground in his release to move the corner outside. He then forces the defender to flip his hips inside, giving him inside body-positioning, and gets upfield and leans into contact to get up in the corners’ kitchen. By pressing on the defenders’ toes, Davis sets up the break and snaps off the route, causing the defender to lose his feet, and then stays level coming across the field to prevent the defender from having a chance to get back into the catch point.

Background: Bowden did absolutely everything for the Wildcats from playing quarterback, slot receiver, running back, and returning punts and kickoffs. In 2019, Kentucky lost two layers of depth at quarterback, so they turned to Bowden as a permanent wildcat QB, and he rushed for over 1,400 yards and 13 touchdowns. Although he projects as a slot receiver at the next level, he’ll need some brushing up on the position after playing quarterback for most of 2019. Still, he offers excellent versatility and return skills to make an NFL roster.

How He Wins: Simplifying how Bowden wins to one or two dominant skills like the rest on the list is difficult, but at the same time, he needs a specific plan to excel at the next level. Bowden is a gadget player with potential as a full-time slot receiver. His dominant trait is his ability to create in space as a ball carrier, but he did have successful reps as an underneath route-runner in 2018.