Patriots Game Plan: How to Expose Josh Allen and Attack the Buffalo Defense 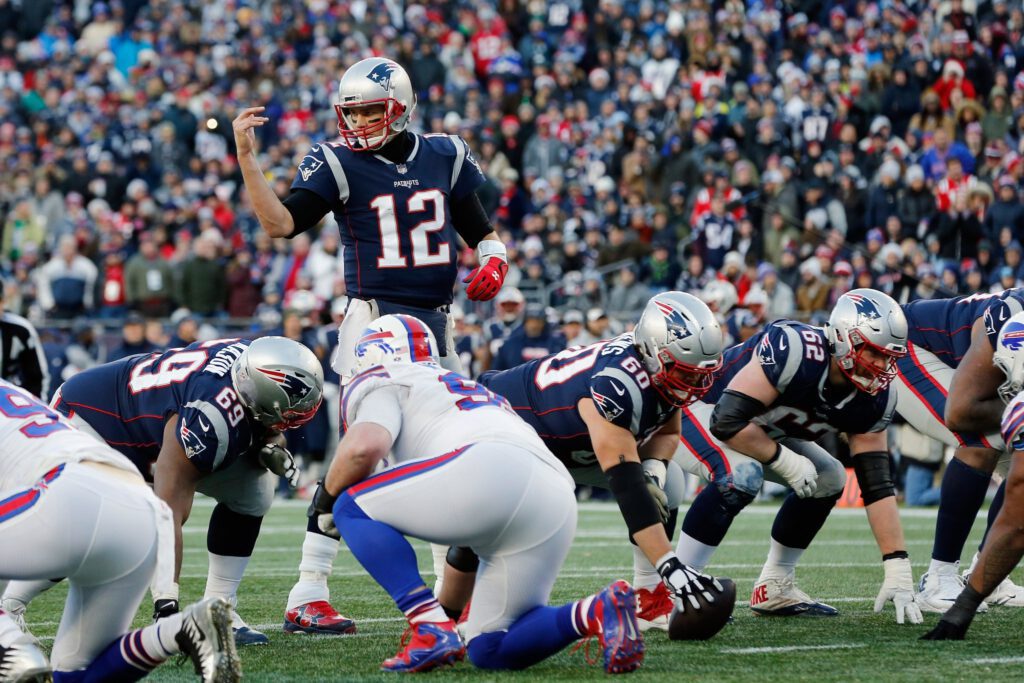 FOXBORO — We might see the Patriots play their first competitive game of the season at Orchard Park on Sunday against the Buffalo Bills.

Buffalo has a good collection of players, but second-year quarterback Josh Allen is still developing. He has made strides as a pocket passer delivering accurate, on-time throws with anticipation on his first read. And he’s a weapon as a ball carrier and makes high-level throws on the move.

However, he still has potentially fatal flaws. Allen makes poor decisions, especially throwing on the move. He struggles against second-level pressure, especially cornerback blitzes. And will flee the pocket if his first read isn’t there.

Allen has made strides, and I’m not trying to slam him as a player. But Belichick will have a game plan prepared that attacks all those weaknesses for four-straight quarters.

Believe it or not, Allen’s been significantly worse as a passer from outside the pocket in Buffalo’s first three games. On the move, he attempts deeper throws and takes more risks with the ball.

Bills offensive coordinator Brian Daboll, a former Pats staffer, has Allen functioning within the structure of the offense better this year than his rookie season.

Allen is attempting shorter, quicker throws from inside the pocket and is doing it in rhythm more often, leading to a 76.5 Pro Football Focus grade and only two turnover worthy plays on 81 attempts.

Outside the pocket, Allen’s poor decisions have led to five turnover worthy plays on only 23 pass attempts and a 33.6 grade (out of 100).

Although he can make some incredible throws outside the pocket, he’s making bad throws more often than good ones.

Belichick and the Patriots coaching staff knows this, and they also know that Allen prefers to scramble to his arm (right) side, as is the case with most righty mobile quarterback.

The Patriots defense could try to invite Allen to flee, probably to his left, to force him into situations that he’ll put the ball up for grabs.

Last season, the Patriots ran a handful of pass-rush schemes doing exactly that.

On this third-down stop, the Patriots show double A-gap pressure in a mug front before the snap. The linebackers back off and they play cover-3 zone. Both John Simon and Adam Butler wall-off Allen’s escape route to his arm side, leaving the option open for him to scramble to his left. To his left, they have Jason McCourty and Dont’a Hightower in underneath zones who can pounce if he takes off running. Allen’s attempt over the middle short-hops his receiver, who might’ve converted with a good throw. Allen is making more of those anticipatory throws this season.

The other thing the Patriots did was run their typical passing-down pressure schemes with a spy on Allen in case he takes off.

Here, they play zero coverage with a five-man pressure and Devin McCourty spying Allen. The Pats ran a unique inside twist with Trey Flowers and cornerback Jonathan Jones. Flowers goes from B-gap to the opposite A-gap while Jones loops around to Allen’s arm side. The right tackle makes a feeble attempt to block Hightower, and Allen quickly throws incomplete.

The addition of Jones (rush) and McCourty (spy) gives the Patriots a lot of speed to track Allen if he does leave the pocket.

Last week against the Bengals, Allen also struggled to make good decisions against blitzes from the secondary. Cincinnati had four defensive backs record pressures in the game.

In particular, Allen struggled against slot blitzes. The Bengals blitz from Allen’s left on the play above, and he sees the corner coming at him. Instead of throwing hot to the hitch by the outside receiver in the direction of the blitz, he panics. First, he wants to take off running, and then he decides to throw a fadeaway pass in the right corner of the end zone that was nearly intercepted.

Allen should look better, especially early where he’s had most of his success during scripted plays, than a year ago. But he’s not ready to handle Belichick, who will throw different pressures and coverages at him, spinning the wheel before and after the snap.

With the defense likely holding down the Buffalo offense, Tom Brady will have to score against one of the best defenses in the NFL over the last two seasons.

In 2018, the Bills were second defensively in Football Outsider’s DVOA efficiency metric, and they are sixth through three weeks this season (the Patriots are first).

The Buffalo pass defense is terrific, ranking fourth in DVOA this season after finishing second a year ago. But as Belichick said on Wednesday, they’re not a game plan team.

“They play zone, they play blitz-zone, they play man-to-man. They have a variety of pressure packages in their blitz-zones – corners, safeties, linebackers. But they mix it up. They play basically one front. No, I don’t think they’re going to come in and [change] – why should they? They led the league in defense last year, led the league in pass defense last year,” Belichick said.

Instead of game-planning different schemes based on their opponent, Bills head coach Sean McDermott has a few primary coverages. Buffalo plays mostly zone, 60 percent of the time since the start of 2018, but will sprinkle in man coverage.

Although they don’t change up their style, the Bills defense can confuse offenses by disguising their coverage before the snap, leaning on veteran safeties Jordan Poyer and Micah Hyde.

“There’s definitely a level of interchangeability, so it’s hard to key on one guy, and really both guys, they complement each other well. You’ve got to see it post-snap. They’re not going to give you much pre-snap,” Belichick added.

McDermott was the defensive coordinator for the Carolina Panthers when they made the Super Bowl in 2015. Like those Panthers teams, the Bills will play a lot of two-high structures, either cover-2 or quarters. Sometimes, they’ll play man or pattern match (zone with some man principles), and they’ll bring zone blitzes.

On this third-down stop, the Bills have one safety in the middle of the field before the snap. The other safety, Hyde, comes in motion with the receiver, usually a man coverage indicator. Instead, Hyde bails out and drops to a half-field safety position, and Buffalo plays a cover-2 zone. Dalton has a first down with the crosser coming from the left slot, but ageless wonder Jerry Hughes hits his arm as he releases the ball.

“They do a good job of that. I think everyone’s pretty aware on defense. I think they have a lot of veteran players that do a very good job of rocking in and out of different looks and so forth,” Patriots quarterback Tom Brady told me on Wednesday.

Brady then reminded me that he’s the greatest saying, “I’ve been at this for a while, so I know what they’re trying to do, they know what I’m trying to do. I mean, I’ll figure it out once the ball is snapped.”

Brady has seen everything, McDermott and the Bills won’t fool him. But his receivers need to be on the same page as the quarterback when Buffalo spins their coverage. And the Bills will try to create a pause in the Pats offense by changing the coverage after the snap.

The advantage for the Patriots in the passing game is two-fold: 1. Since they know what Buffalo is doing, they can run plays that expose holes in those coverage and 2. There should be opportunities throwing to the middle of the field against the Bills linebackers.

Let’s start with exposing the Bills cover-2 zone. Here’s a fantastic breakdown by friend and fellow film junkie Erik Turner of how the Patriots attacked Bills rookie Tremaine Edmunds in coverage by pulling him out of the middle of the field with the running back.

Brady and the Patriots also picked on Edmunds and third-year linebacker Matt Milano with play-action. Edmunds and Milano are aggressive, downhill players that will trigger forward when they’re given run keys by the offense.

On this play, the Patriots sent two receivers in motion before the snap to give Brady a man-zone indicator. Nobody follows them, so Brady knows its zone. The Patriots pull the backside guard to simulate a power running scheme from shotgun, and both linebackers take a few steps forward biting on the fake. Milano widens to Gronk up the seam and Edmunds doesn’t get enough depth in his drop, so Brady rifles a pass to Chris Hogan between the two of them.

“Buffalo plays an aggressive defensive front. They’re quick to try to get downhill and hit the line of scrimmage in the running game, and we tried to find some space in there behind it,” Patriots offensive coordinator Josh McDaniels said following the Week 8 victory over the Bills last season.

For the Patriots, it’ll be tough sledding if they try to win throwing outside the numbers against talented Bills cornerback Tre’ Davious White and half-field safeties in a two-deep coverage.

But their familiarity with McDermott’s defense along with easily influenced young linebackers should lead to opportunities over the middle of the field.

For more on the Bills, here are some other thoughts about the matchup in Buffalo:

– The Patriots defense will also need to be ready for a Buffalo rushing attack that ranks fifth in DVOA. Frank Gore is their workhorse, rookie Devin Singletary is averaging 12.7 yards per rush in a small sample, and Josh Allen ranks second among quarterbacks in rushing yards (105). The Bills run power concepts with man blocking schemes. They lead the NFL in rush attempts with at least one pulling guard and are averaging 5.9 yards per rush on those actions, according to Sports Info Solutions.

– The addition of Cole Beasley gives the Bills a receiver that can separate against man coverage and get open quickly on shorter routes, giving Allen easy throws. He plays mostly in the slot, but they’ll bring him in motion on specialized plays. Beasley’s usage is similar to how the Patriots deploy Julian Edelman, and like Brady with Edelman, he’s how they get Allen rolling.

– It’ll be interesting to see how the Patriots matchup against the Bills receivers. Jon Jones might be their best option on speedster John Brown, but that’ll leave Jason McCourty on Beasley. We could see Gilmore on Brown, Jones on Bealey and McCourty on Zay Jones. Gilmore’s aggressive press coverage should prevent Brown from getting downfield.

– The Bills re-worked their offensive line in the offseason, but they’re still 17th in pass-blocking efficiency. Allen has a difficult time seeing blitzes, and the line struggled to block Cincinnati’s stunts. Expect the Pats to be in attack mode.

– The Bills defense ranks fourth against the pass in DVOA but 21st against the run. They’re also 20th in run defense grade according to Pro Football Focus. The Bengals had some success with counter plays moving the linebackers and working combination blocks on the interior defenders. We’ll see if New England can get its running game going.

– The Bills defense only plays a few different fronts. They’ll go four-down lineman on early downs and then put stand up linebackers on the line of scrimmage on passing downs, usually on the interior. They’ll cycle in some mug fronts (linebackers in the A-gaps) as well.

– The numbers don’t reflect how dangerous the Bills pass rush can be. They rank 25th in pressure rate at 33.6 percent, according to PFF, but the average time to throw of the opposing quarterbacks was a brisk 2.4 seconds. Rookie Ed Oliver already has ten disruptions, and veterans Jerry Hughes and Lorenzo Alexander can still get after the quarterback. Buffalo also batted nine passes down at the line of scrimmage in the first three weeks.