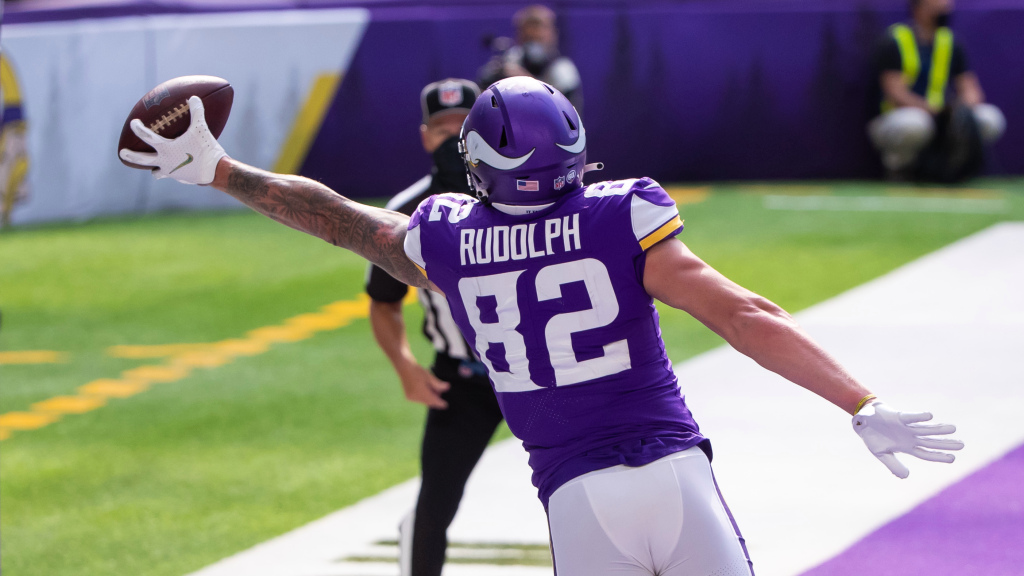 The impact of the coronavirus pandemic on the NFL is causing a league-wide cap crunch.

Although the Patriots are sitting pretty cap-wise, most of the league is scrambling to become cap-compliant and give themselves wiggle room to operate in the 2021 league year.

As a result, we are seeing massive amounts of mid-level veteran cuts that are saturating the market and could present a huge advantage for Bill Belichick as he fills out his roster this spring.

However, as a rebuilding team, our instincts tell us that the Patriots need to get younger. The consensus take is that some of these mid-level vets might make the team better now, but the Patriots should focus their resources on younger players rather than castoffs from other teams that couldn’t afford a 30-something-year-old’s contract.

On the one hand, the Patriots do need to go after ascending players, but even $63 million in cap space isn’t going to stretch far enough to address all their needs with major acquisitions. In some cases, they’ll need to draft, develop, and fill in with veterans, as they always have.

Let’s dive into a possible scenario to explain why signing a few of these recently cut veterans could help the Patriots:

Let’s say Belichick, who is rumored to have a bag of money for whichever pass-catcher is willing to take it on his shortlist of targets, pays big bucks for a free-agent wide receiver. If they can lure one of them here with money, Allen Robinson or Kenny Golladay fit the mold.

In this scenario, one of many possible outcomes, the Patriots might not have enough cap leftover to aggressively pursue a top-of-market tight end such as Hunter Henry or Jonnu Smith.

Instead, counting on a year-two leap from their 2020 third-round selections in Devin Asiasi and Dalton Keene or even dipping back into the draft for a higher-upside move would make sense.

Then, to lessen the burden on those younger players and allow them to develop, New England could bring in Kyle Rudolph or Jared Cook, two tight ends they’ve targeted in the past.

Although Rudolph and Cook aren’t game-changers, they’ll serve as steady veterans that will give the Pats far better production than they’ve gotten out of their tight ends the last two years.

The recent mid-level cuts make sense for the Patriots because they’ll fill out the roster with players who can immediately step into significant snaps, which will be valuable in certain spots.

Again, the Patriots should make a few big moves on blue-chippers, but after that, filling out the rest of the roster with mid-level veterans is a great way to build depth. And they’ll be cheaper in an oversaturated market with less cap space overall.

In our wildest dreams, the Pats acquire Robinson, take stabs at solving the quarterback position, and then fill out the roster with the 2021 draft class and the Rudolph’s and Van Noy’s of the world. All of a sudden, a depleted roster a year ago has both top-end talent and veteran depth; now we are in business.

Turning the page to your questions, thanks again to everyone that asked a question this week. I’ve gotten some great ones since I started doing the mailbag. Let’s get to it:

What have you heard about some of the released players to NE?

Since we started things off with cap casualties, discussing fits is the next step. Former Pats linebacker Kyle Van Noy is obvious, as are tight ends Kyle Rudolph and Jared Cook, but the one name I’d monitor is defensive lineman Henry Anderson. Anderson is a prototypical Pats defensive end with good size (6-6, 300 pounds) and versatility to move all over the line. He’s a 3-4 base end but can play multiple alignments and is sound against the run. Anderson’s ability to play with natural leverage at his size and adhere to low man wins makes him a stout hand-in-the-dirt lineman. I wouldn’t be surprised to see him in Foxboro.

Diana Russini got that text: “It’s going to be a massacre next week all around the league." Putting Gilbert, Cannon, and Hightower's situations aside, who else do you see as possibly getting cut to make more space for "good deals" that may pop up from the large FA pool?

I wouldn’t expect the Pats to cut any players until training camp. They have plenty of cap space to carry players into camp and let competitions play themselves out. We could see contract restructures (Cannon) or extensions (Hightower) to lower 2021 cap numbers. Cannon, in particular, is not going to be on the team at his current $9.6 million hit. The veteran right tackle is playing in 2021, but he’s likely looking at a pay cut. Outside of that, I don’t expect the Patriots to be in on the cut fiesta.

Given the uncertainty at the qb position, should we temper expectations of a big splash on that side in FA, & instead expect majority of FA action on defense with draft focused on offense?

Every week, I get this question, but my answer never changes; certain players will want to sacrifice money to be in a better offense with a star quarterback. But others, especially those looking for a big payday coming off their rookie deals, won’t. If you’re an upper-echelon player on a rookie deal, you want to get paid now. Although it might not be their top target, money talks, and I think a free-agent receiver will take New England’s money.

How would you feel about the pats forgoing a QB in the first round and taking Kellen Mond in the 2nd round? Assuming he would be available at no. 46.

Getting to some draft questions now, many of you asked about Mond, so I delivered a much more in-depth answer in a film breakdown here. Currently, I have Mond ranked as QB6 in the class and my top day two option. He’s not as talented of a thrower as Fields, Lance, and Wilson or as accurate from the pocket as Jones, but I see a quarterback that can function in a pro-style scheme. Is he going to set NFL records as a passer? Nope. But can he be the Pats’ version of a Jimmy G or Kirk Cousins with better mobility? I think so. Mond was essentially a system QB for A&M that got the ball out quickly and made smart decisions. There’s something to be said for that if you can drop the quarterback into a successful scheme with good receivers.

If QBs go 1-4 in trade up scenarios, is it worth trading up for Mac Jones or taking best available player?

I don’t think it’s worth trading up for Jones. I’ve been on the train for a while saying that Jones should be a first-round pick, maybe even the guy at 15, but giving up valuable draft capital to get him is a bit too much. We know that Jones can operate at a high-level with great coaching and playmakers around him. Can he elevate his receivers at the NFL level or bring anything individually to the system to make the offense successful? Jones is a deadly accurate pocket passer, and he does so many of the little things well, which are often overlooked in these evaluations. Sure, certain guys can throw the ball a mile, but can they throw accurately, work the pocket, and get through a progression at NFL play speed? Jones does all the little details well, which is why I gave him a first-round grade, but the ceiling is too low for a trade-up.

If we let go both Burkhead and James White, would you rather sign Duke Johnson, or get a RB in the 3rd or 4th round (Jermar Jefferson, Kenneth Gainwell)?

I wouldn’t pay anyone to replace White. I’m really high on Demetric Felton from UCLA, who had a great Senior Bowl week in front of Pats scouts. Felton is a receiver playing from running back alignments that can also flex out wide to hunt matchups. He’s got a lot of James White in him, and I think the Patriots took notice down in Mobile. Felton will likely go in the third round.

Which defensive linemen could BB target in free agency?

Yannick Ngakoue, Shelby Harris, Trey Hendrickson, Matthew Judon, and maybe Leonard Williams if the money doesn’t get silly. Ngakoue will get paid, and Belichick usually doesn’t pay for pass rush (see Chandler Jones), but the Patriots loved Ngakoue in the 2016 draft and made the mistake of drafting Cyrus Jones over him nine picks earlier. Will Belichick correct his mistake now that Ngakoue is a free agent? It’s possible. The other target I’d go after is Shelby Harris, who blew up the Pats’ offensive line in the loss to Denver last season. Harris reminds me a little of former Patriot Jabaal Sheard. He can play anywhere on the line and all three downs. His versatility, power at the point of attack, and power pass-rush moves are Patriot-like.

My fist thoughts on Keene were that he would be the Hernandez to Asiasi’s Gronk. Do you think he could be used as a utility/gadget player successfully?

I gave my honest assessment on Keene last week, and some readers were disappointed that I’m giving up so quickly on a second-year player. It’s not that I’m giving up; it’s that I’m not convinced he’s being used correctly. Keene is an H-Back, or maybe a fullback, but he’s not a traditional tight end. They need to get him off the line of scrimmage and start in the backfield to build up speed to convert it into blocking power. The hope that I have for Keene is that they transition him into a Kyle Juszczyk-type role. If they don’t, I don’t see him developing into a starter.

Looking at Dak Prescott Russell Wilson etc. In this era;can't a team find a good to great Qb later IF they can put them into solid situation…making the supporting cast more important, should Patriots focus on solid situation building rather than finding QB saviour?

As we split hairs over this quarterback class, I think it’s an important point to make that the quarterback with the best career from this class will be the one that goes to the best situation. There’s no such thing as a quarterback savior. It doesn’t exist. Every quarterback needs help, a solid system both schematically and leadership-wise, and patient coaches. The situation around the quarterback is just as important as the QB himself.

Should the Pats simplify the offense? They can’t find receivers who can learn it before the team gives up on them. With a possible youth movement what is the benefit of being so complicated?

Another question that I constantly get and give a similar answer to each time: the Patriots simplified their offense last year for Cam and his young/new receivers, and we saw how that went. I don’t think simplifying things is the answer because receivers need to make route adjustments based on the coverage, or they’ll never get open in the NFL. New England is far from the only team with option routes in their offense, even college teams like Ohio State do, so I think the notion that their scheme is too complex is a bit overblown. The system’s complexities came with Tom Brady’s years of experience, allowing them to run such a wide variety of formations, not the play designs themselves. Could they benefit from shrinking the playbook a bit? They’ll need to if it’s a rookie under center. But I definitely don’t think they should eliminate option routes from the scheme.