Patriots Mailbag: Mac Jones is a Better Scheme Fit in the Pats’ Offense Than Cam Newton 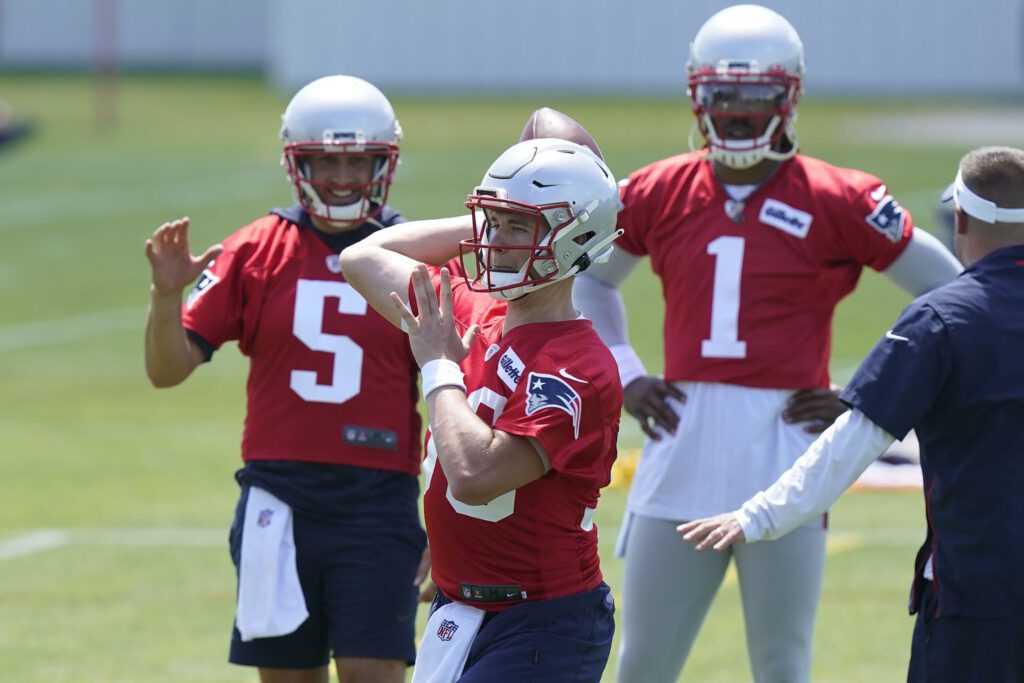 The most telling aspect of OTAs and minicamps has nothing to do with player performance.

Evaluating quarterbacks in the spring consists of citing practice stats and a standout play or two; a bullet completion on a dig route, an interception, or anything else that catches one’s eyes.

Those in attendance for Patriots minicamp, myself included, write practice reports that are subjective and difficult to assess without the benefit of practice film review.

The far more telling aspect of spring practices is this: minicamp is a teaching period where the coaching staff begins installing its core set of plays, giving us a clear view of what the Patriots want their identity to be on offense and defense.

Based on the six spring practices open to the media, the roots of offensive coordinator Josh McDaniels’s passing system still haven’t changed since Tom Brady’s departure.

First, McDaniels will always feature the quick-game heavily, where vertical routes are designed to create space for receivers underneath the defense while quarterbacks are tasked with making quick and decisive decisions to get the ball into the hands of their playmakers.

And second, McDaniels wants to create chunk plays by having receivers move horizontally across the field into voids of space to catch and run with the football.

Patriots starter Cam Newton is still capable of playing good football. His arm strength and athleticism are better than rookie Mac Jones’s, and he brings experience and excellent leadership.

But he doesn’t operate efficiently in the quick game or a timing-based system, and the former MVP isn’t at his best throwing to horizontally moving targets with consistent accuracy.

To use a baseball analogy, Newton is like a power hitter who hits .225 but can mash 35 home runs. In his prime, Newton was among the league leaders in average depth of target. In his 2015 MVP season, his aDOT was 10.9 (2nd in NFL).

Pointing out stylistic differences isn’t a knock on Newton, but rather highlighting that McDaniels prefers a player who hits for average rather than the high-variance of a power bat.

On the other hand, rookie quarterback Mac Jones’s fit in McDaniels’s basic concepts was apparent throughout the spring.

Jones thrives in the quick-game, accurately threw crossers and in-breakers, and kept the offense on schedule with a fast release.

The Pats’ first-round pick was far from perfect, with three interceptions on the final two days and plenty of rookie mental errors. Still, stylistically, he’s McDaniels’s type of quarterback, and that’s why he’s going to take over as New England’s starter sooner rather than later.

Newton is the starter for now. His leadership and charisma are infectious in the building, and Jones will need time to develop.

But unless McDaniels makes wholesale changes to his passing system for Newton, not just slight adaptations as we saw a year ago, it’ll remain an odd fit.

McDaniels, in fact, publicly stated that he wouldn’t change his system but rather adapt it to the personnel numerous times.

“It’s not changing your system. It’s adapting your system to the talents and strengths of your players,” the Pats offensive coordinator said last August.

Plus, should the Patriots shift their system towards a 32-year-old Newton, especially after selecting Jones in the first round?

At some point, McDaniels will realize that Jones will allow him to run things his way.

Without further ado, let’s empty the mailbag. Thanks to everyone that asked a question this week. As always, please subscribe to our YouTube channel for more Pats coverage:

What will the Pats contract offer be to Gilmore if you had to guess?

Gilmore’s camp is using Eagles cornerback Darius Slay’s most recent contract as a starting point. Slay signed a three-year, $50.05 million deal with over $26 million guaranteed at age 29. Although Gilmore is nearly two years older than Slay was, he’s a better player. I don’t think the Patriots’ offer will include a third year, but a $16 per year average is possible if the term is shorter. A two-year, $30 million extension with a signing bonus upfront to incentivize Gilmore to report to training camp is what I’d expect.

If Trent Brown reaches a long term extension, what would you expect his contract to look like?

Another good question because this one is a possibility as well. Both Brown and the Patriots know they are better when they are together, and the hulking offensive tackle spoke at length about his love for the program in New England. Plus, the Pats need to solidify both starting tackle spots beyond the 2021 season. To that point, Brown might take a little less to continue playing for the Pats beyond this year. The going rate for a good starting tackle is around $14 million per season, which is doable from a Pats perspective, and any deal with Brown would surely include incentives to keep his weight down.

Tackle position is thin (I think they should keep Onwenu at guard) this year and worse next year. What are the Pats gonna do? Maybe trade Harry or Michel for depth?

Sticking with the offensive tackles, the depth behind Brown and Wynn looks a little thin, but I’ll disagree slightly on Onwenu. Onwenu will start at left guard this season. However, if an injury to Brown or Wynn occurs, they’ll kick Onwenu outside to tackle while plugging Ted Karras into Onwenu’s spot. In essence, Onwenu is the Pats’ top backup tackle, with fellow 2020 draftee Justin Herron as a fourth option, so they have a solid contingency plan. Epect the Pats to eventually use a premium pick on an OT in the 2022 draft.

Is there a world where Mac Jones and cam Newton function as a brees/hill Saints offense?

Back to the quarterbacks for a moment, we’ve discussed a Newton package with Jones as the primary quarterback. If things break that way, it wouldn’t surprise me if Cam is still a factor as a short-yardage threat to run the football. He won’t play receiver, so not full Taysom Hill, but a specialized group of plays for short-yardage and goal-line work makes sense. Last season, Newton had the fourth-highest success rate of any ball carrier in “power” situations, per Football Outsiders (power = two yards or less to go, goal-to-go situations).

Who do you think would be the number one on the receiver depth chart if there was a game on sunday? Jakobi or Agholor?

The Patriots will never view the wide receiver position in the prism of having a number one receiver. Not with Randy Moss, Julian Edelman, Wes Welker, Nelson Agholor, or anyone else. The Pats put wideouts into two groups: outside receivers (X) or inside receivers (z/slot). But in a world where they’re only putting one receiver on the field, I would expect it to be Agholor since he can take the top off.

Uche spent most of minicamp working as a standup edge rusher. He did some work with inside linebackers coach Jerod Mayo during walkthroughs, positional drills, and 7-on-7. But when we got into the real stuff, Uche was on the line of scrimmage, where he was an absolute force rushing the passer.

Would you be more surprised if Olszewski makes or doesn't make the roster at this point?

Gunner is going to make the team as an All-Pro punt returner and developmental slot receiver. If Belichick believed in roster bubbles, Gunner would not be on it.

Who on the defense is going to be the MIP (Most impactful player) that we aren't talking about this year. Not MVP (probably Hightower when he's out there) but a player who is going to be dynamic and make big plays game after game.

Kyle Van Noy. Van Noy looked like the same player that led the Patriots in quarterback pressures in 2019, seamlessly transitioning back to his old role in Belichick’s defense. We all want to see newcomer Matt Judon and young players like Uche and Dugger succeed, but KVN with Belichick is an outstanding football player.

Is there a "no name" guy on the roster currently making a surprise push for the 53-man roster (not counting Zuber)?

The three lesser-known players, other than Zuber, positioning themselves for a run at the 53-man roster are cornerback Mike Jackson, Sr., safety Adrian Colbert, and linebacker Raekwon McMillan. Jackson’s length and physicality fit the bill as a press-man corner for the Pats, while Colbert can do multiple things in the backend, and McMillan is a classic core special teamer/depth linebacker. For now, I had all three off of my 53-man roster projection, which you can read here. But they have a shot at the initial roster this summer.

Who are your surprise cuts

I went over some surprise cuts or trades in my roster projection as well. Anfernee Jennings or Dalton Keene might qualify as surprise cuts, but it feels a bit hasty to give up on former third-round picks in their second seasons. There could be a surprise trade from Jarrett Stidham, N’Keal Harry, Sony Michel, Chase Winovich, and Joejuan Williams group.

Bentley is a core member of the Patriots’ linebackers group and has a ton of in-game experience. Still, Hall brings more athleticism in space and special teams ability, so I understand why people think he’s a better bet. I’m not saying Hall can’t beat out Bentley, but I’ll believe that Belichick will give up on a thumping linebacker in the Bentley mold when I see it.

Did you see any kicking at minicamp? How is the rookie from Michigan doing?

As Julian Edelman would say, Quinn Nordin has a “boomer” of a leg. The rookie made a field goal during minicamp heading towards the training camp bleachers that nearly landed in the parking lot. If he can continue to improve his accuracy, it’s evident that Nordin has an NFL leg. However, veteran incumbent Nick Folk didn’t miss a beat after a stellar season a year ago. Even though Nordin has an NFL future, I’d be surprised if Folk loses the job.