The Patriots need to finish drives in the end zone more often. 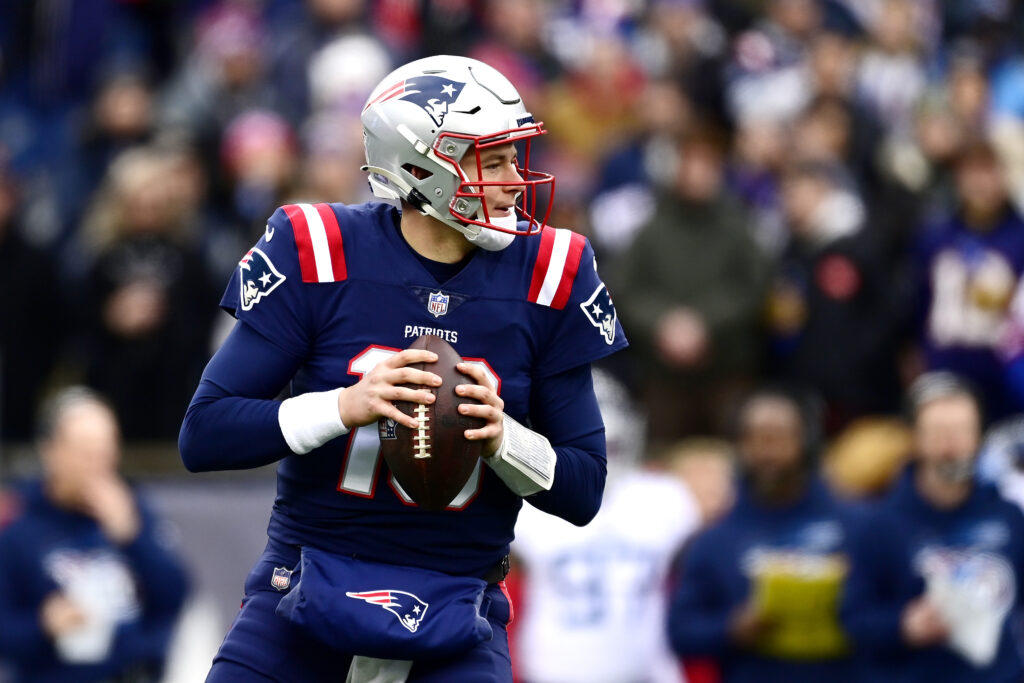 Jones threw for a career-high 310 yards on 32 attempts (9.7 average), two touchdowns, an EPA per drop-back in the 87th percentile, and a +8.3 completion over expected. Jones had five passes of 20-plus yards (removing screens), showed off his advanced understanding of New England’s passing concepts, and led the Pats offense to points on eight of their ten drives (excluding kneel-downs).

New England’s offense led by Jones moved the ball all afternoon, yet Pro Football Focus made headlines when they gave Mac his lowest overall grade of the season (51.9) despite a career-high in passing yards.

A realist will admit that the Patriots were good enough to beat a banged-up Titans team but will need a better effort against Buffalo and beyond. Even if we accept that, it doesn’t make it Mac’s worst performance of the year.

Although saying it was that bad for Jones was harsh for our taste, a fair criticism of Mac’s performance is that he left points on the field with uncharacteristically poor accuracy and a few sloppy decisions.

Drives ending in field goal attempts is an ongoing issue with the Patriots offense. This season, they’re the only team in the NFL whose percentage of drives that finish in field goals eclipses 19% (24.4%). The Pats are number one in scoring efficiency at 49.6%, but only 25.2% of those are touchdown drives (13th in NFL).

Obviously, it wasn’t all on Jones because nothing is ever all on one player, but he was part of the problem at times (he was also a major part of the reason why the Patriots were in position to score touchdowns in the first place).

Let’s take you through three of the stall-outs for the Pats following their opening drive TD.

Drive two: Mac drove the offense to the TEN 8 with four-straight completions for 71 yards, so naturally, McDaniels runs it twice on first and second down. Some habits will never die.

On third-and-four, Hunter Henry has a chance on a shallow crosser against man coverage if Mac puts the ball in his catch radius. Instead, Jones throws an uncatchable pass out of bounds without much pressure in his face. Field goal.

Drive four: the defense forces a fumble, then the Pats offense gains 40 yards on consecutive plays (helped by a 15-yard facemask penalty) to get down to the TEN 26.

Facing another third down, Henry smokes Titans safety Kevin Byard on a corner route, and Jones is on it with the read. But his mechanics are off in the pocket with his body pointed straight upfield rather than stepping towards Henry, and he overthrows a walk-in touchdown.

Drive six: Coming out of the half, the Pats have great starting field position thanks to a good return by Gunner Olszewski and a penalty. Jones then hits Jonnu Smith for a 20-yard completion followed by two positive runs by Damien Harris to get into the red zone.

Then, Jones has a three-play sequence where he nearly throws a backward pass resulting in a fumble to Kendrick Bourne, has a dropped interception by a Titans linebacker, and scrambles well short of the sticks on third down.

The coverage of Mac Jones should be overwhelmingly positive. We published a glowing film review above about Jones vs. the Titans and even wrote that Bill Belichick is the runaway Coach of the Year, mainly because of Mac’s development in his rookie season.

But the facts remain twofold: 1. When you went throw-by-throw last Sunday, Jones left too many points on the field, and 2. The Pats are real contenders this season if Mac cleans things up.

As the competition stiffens up with Buffalo next week, it’s time to see Jones elevate his game.

Now, here are some other leftover film notes from the Patriots’ win over the Titans in Week 12:

1. How Concerning Was the Patriots’ Run Defense Woes on Sunday?

There are a few ways to look at what happened with the Pats’ run defense against the Titans, which surrendered 270 rushing yards on 39 attempts (6.9 average).

The positive spin is that the Patriots defense executed “bend don’t break” by forcing four turnovers, thus holding Tennessee to 13 points, and that’s the way the cookie crumbles sometimes.

On the other hand, the players have openly admitted that they prepared for the run-heavy Titans offense and weren’t surprised by the schemes Tennessee used; they just couldn’t stop it.

Looking at the tape, the poor technique and lack of physicality stand out.

Above, Dont’a Hightower fires into the play-side guard to force the cutback, but there’s no resistance from the backside pursuit. Nose tackle Carl Davis doesn’t hold up the right guard from climbing to the second level and gets turned out by Titans stud center Ben Jones, allowing the right guard to work immediately up to Bentley, who gets blocked ten yards downfield. The only positive from this play is Devin McCourty forcing D’Onta Foreman back inside where J.C. Jackson has a better chance to chase him down (and forces a fumble).

You can see a similar development here. Bentley fires into the play-side combo block to force the cutback, Godchaux gets turned out by Jones, Wise doesn’t hold up the right guard from climbing to Dugger, and it’s another explosive run for Tennessee.

The Pats’ D-Line needs to occupy blockers on the line of scrimmage, and the backside linebackers need to be more aggressive coming downhill.

With the Titans driving to make it a one-score game, the Patriots made a critical goal-line stand that ended in a J.C. Jackson interception.

The key play in the sequence came on second down, where the Titans started in an under-center formation out of 12-personnel then motioned into empty against the Pats’ big goal-line package. The Pats communicate their initial man coverage assignments on the fly, and linebacker Kyle Van Noy hand signals to Adrian Phillips that they’ll exchange on a switch release on a “banjo” call. When the ball is snapped, the inside slot receiver across from Van Noy goes outside on the rub concept while the tight end releases inside to set a pick and then run the seam. KVN and Phillips pass it off perfectly, and Van Noy breaks up the pass in the end zone.

Although it’s easy to second-guess Tennessee for throwing the ball twice in four downs, the Pats defense wasn’t fooled by the Titans’ window dressing and made two fantastic defensive plays.

As we wrote in our preview of this one, the Titans have a stout run defense, and it wasn’t a huge surprise that it was tough sledding for the Patriots on inside runs.

However, seeing the Pats’ starting tackles, Trent Brown and Isaiah Wynn, fail to open space on kick-out blocks against Tennessee’s edges was more worrisome. It’s one thing to stalemate against Jeffrey Simmons, but Harold Landry and Derick Roberson set the edge consistently.

Here, Roberson uses good pad level to get underneath Brown on an outside zone kick-out and beats Brown inside to blow up the play.

In this play, they run outside zone to Wynn’s side and get a good push from the combination block by Mike Onwenu and David Andrews on the interior. But Wynn can’t kick out Landry.

With the Titans using run blitzes and stunts to shut down New England’s gap/power schemes, the Pats ran more zone blocking. However, their tackles struggled to open holes for the backs.

Over the last six games, the Patriots are averaging over 32 yards per screen pass as they’ve improved significantly in that area.

Patriots center David Andrews gave an excellent explanation as to why the Patriots went through an adjustment period this season with how they block screens.

“They changed the rule this year with linemen cutting in space, right? That was a big thing,” he said. “It took us a little bit to adjust to because you could go out there and just really throw a cut, either get the guy down or he jumps around you. You’re usually blocking a lot more athletic people when you’re out there. That was a rule change, and that was different for us because since I have been here with Scar (Dante Scarnecchia) — for as long as I have — and that was engrained to us. You go out there on a screen, you better throw a cut because if you didn’t, there would be hell to pay maybe.”

With another 44 yards on three screens on Sunday, it’s safe to say the adjustment was made.

According to Football Outsiders, the Patriots now rank third in special teams DVOA this season, and that discrepancy was on full display on Sunday against the Titans.

After a kickoff or punt, the Titans’ average starting field position was their own 22-yard line, while the Patriots’ average drive start was Tennessee’s 41-yard line. Those things add up.