Bill Belichick wouldn’t give into questions on who would be the team's de facto offensive coordinator following Thursday’s loss to the Giants. 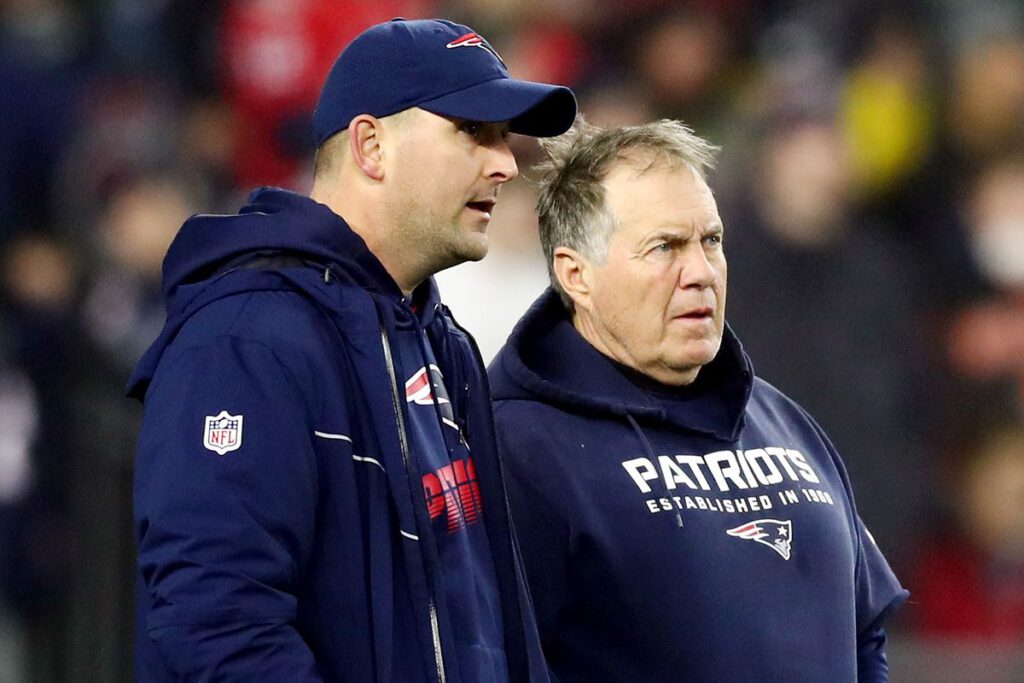 FOXBORO, Mass. – We learned a lot about the Patriots in their loss to the Giants on Thursday night.

One thing we didn’t get any insight on, however, is who will be calling the team’s offensive plays during their week one matchup against the Miami Dolphins.

During the first few weeks of training camp, it had looked like Patriots senior football advisor and offensive line coach Matt Patricia was running away with the play-calling duties. Despite QB coach Joe Judge running some of the show during a few 7-on-7 periods, the former Lions head coach called all of the team’s plays when they came together in 11-on-11 over the last several weeks.

However, this changed on Thursday night. Patricia and Judge instead split the play-calling duties, with Patricia taking the reins during Brian Hoyer’s first quarter drives and Judge taking over during the remaining three quarters with Bailey Zappe under center. It felt like a starter/backup type deal, allowing Judge to get a feel for the role and potentially win the job.

Q: We saw both Matt Patricia and Joe Judge taking turns on play call duty tonight on the offense. Is that the plan moving forward, having them switch back and forth, and do you plan on naming a single guy or going with both?

BB: Yeah, well, we did this game. We did a lot of things in this game that are going to be beneficial in the long run, whether it was on the coaching staff, playing time, playing positions, players that played and so forth. That’s all part of the process.

Q: Bill, what were some of the benefits of having Joe and Matt call plays tonight?

BB: I thought it would be a good opportunity for us to do that.

Q: Do you know if one will call plays when the regular season arrives?

BB: Yeah, don’t worry about that. We’ll work it out.

Q: Have you decided?

BB: We’re going through a process. Just like everything else on this team.

Q: How did you feel the communication went offensively with both Matt and Joe relaying signals in there tonight?

BB: Yeah, I didn’t think the communication was a problem. We had 12 men on defense on one play, but otherwise the play clock was pretty – we had plenty of time for the most part. We had a couple injuries and a couple substitution issues, but overall, those are more – it wasn’t the operation, it was a guy being heard or a substitute because that caused some other substitution things, so we can clean that up a little bit, but I thought we were on the ball quickly, had plenty of time to operate. We had to audible a few times and were able to do that. There’s plenty of room for improvement. I’m not saying we’re there yet, but getting there.

Q: You mentioned earlier with the offensive play caller you’re going through a process. What do you need to see?

BB: I don’t need to see anything, just we’re going through a process. Simple as that.

Q: It’s just a little bit of an unusual situation for us that have watched you guys before –

BB: What do you want me to do?

Q: I guess we’re just looking for a little clarity as to why we’re seeing what we’re seeing.

Clearly, his mind is far from made up.

It’ll be interesting to see where the Patriots take this from here. With just under a month to go until their week contest in Miami, there’s not much time to waste fiddling around with who’s going to lead the charge for your offense.

We’ll see how they evaluate what happened on Thursday – and should have a clearer image on who will be the ringmaster of the offense during joint practices against the Carolina Panthers this week.