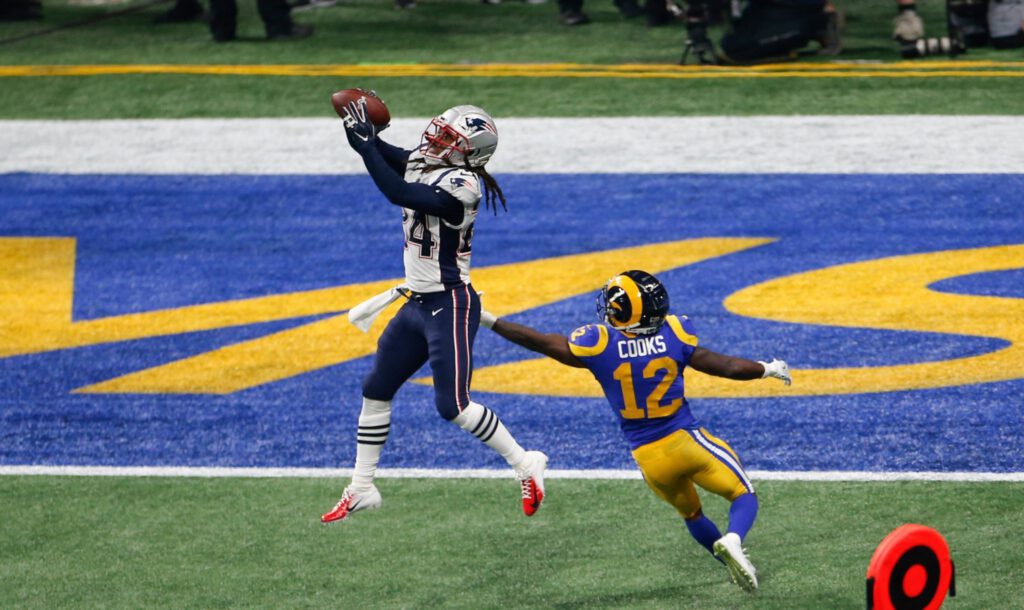 This is part eight of a position by position roster preview ahead of Patriots training camp.

Gilmore – the Patriots’ only All-Pro from a year ago returns for his third season with the team, and the only question is can Gilmore possibly get better? Last season, he led all cornerbacks in Pro Football Focus grade (90.7), forced incompletions (29) and Sports Info Solutions’ points saved metric shutting down a gauntlet of the league’s best wide receivers. Gilmore’s patience in man coverage is phenomenal as he trusts his long speed and hip fluidity to stay square with the receiver until he commits to a release down the field. Combine those movement skills with his ability to play the ball in the air, and you get a consensus All-Pro cornerback.

Williams – The Patriots’ infatuation with Williams ended up being very real after it felt like a smokescreen in the days before the draft. The Pats love Williams. Love him, and although his college tape was inconsistent at times, you can see why given his physical tools and alpha-dog mentality. Williams is as long as they come for a corner at nearly six-foot-four with 32.5-inch arms. The rookie played 88 percent of his snaps as an outside corner for the Commodores last season, but as I wrote back in May, his skill set is reminiscent of former Pats corner Brandon Browner. Belichick spoke at length about the necessity for his secondary to have cornerbacks of all shapes and sizes to match up against all the different kinds of receivers in today’s NFL, including tight ends, so Williams could be the center of the basketball team if you will that draws the bigger receivers.

Jackson – Jackson will be an interesting case study this season of the volatility in advanced metrics at the cornerback position. The second-year undrafted free agent has terrific ball skills and can stick to receivers of all sizes. Last season, he allowed only one catch of 20 or more yards on 14 deep targets and the 42.0 passer rating into his coverage was the lowest of all cornerbacks, according to Pro Football Focus. However, due to several different variables such as matchups and when he was thrown at within the progression, those numbers can often swing dramatically year to year for corners. The good ones have the smallest change in target-based stats, so we’ll see just how good Jackson is in year two.

McCourty – the other McCourty twin feels like a roster lock after a terrific first season with the Pats, but due to the depth at the position he needs to keep it up entering his age 32 season. McCourty gives the Patriots scheme versatility and flexibility logging snaps in multiple spots and multiple coverage schemes. His ability to play both man and zone coverage at a high level separates him from a much younger corner like Jackson. In the AFC Championship Game, Jackson out-snapped McCourty because the Patriots went with a man-heavy game plan. In the Super Bowl, they played a lot of zone on early downs, so the coaching staff went with McCourty. Like his brother, Jason is an extremely reliable and technically sound player.

Jones – Jones is a good example of how those target-based metrics can be inconsistent year to year. In 2017, Jones allowed an 80.5 passer rating into his coverage, and that rose to 91.4 last year. Did Jones get worse or did circumstances lead to a slight step back? I’d go with circumstances playing a more significant role as Jones was still productive working out of the slot and even playing some safety in the Super Bowl. As one of the Pats’ fastest defensive backs, Jones went from Tyreek Hill’s shadow in the AFC Championship Game to a “rat” safety against the Rams cutting off their intermediate crossers. Add in his special teams value, and it’s easy to see why the Pats put a second-round restricted free agent tender on the 25-year-old.

Dawson – the 2018 second-rounder is the forgotten man in the Patriots’ cornerback room after playing just 16 preseason snaps as a rookie. The former Gator dealt with a hamstring issue that forced him to essentially redshirt his rookie season after JC Jackson ascended while Dawson was on IR. However, Dawson is far from an afterthought as teams seldom give up on second-round picks this quickly. He was one of the standouts in minicamp showing off his man coverage skills from the slot and should compete for that role with Jon Jones.

Biggest question: will there be a surprise cut or trade from this position group?

At the minimum, the Patriots go six deep at cornerback, and that could extend to seven if 2018 seventh-rounder Keion Crossen has a strong camp. With that in mind, we could see Bill Belichick make a move to open a roster spot at another position. The most likely scenario is that the Patriots find a trade for one of their young corners potentially to bolster a hole elsewhere, maybe for another receiver or an offensive tackle. Jon Jones, who is one a one-year deal worth roughly $3.1 million, is the most likely candidate. Jones is affordable, and only a one-year rental, plus, the Pats have Dawson waiting in the wings at slot corner. But Belichick likes surprises, and it wouldn’t surprise me if they sell high on someone like Jackson if they can add a high-impact player.