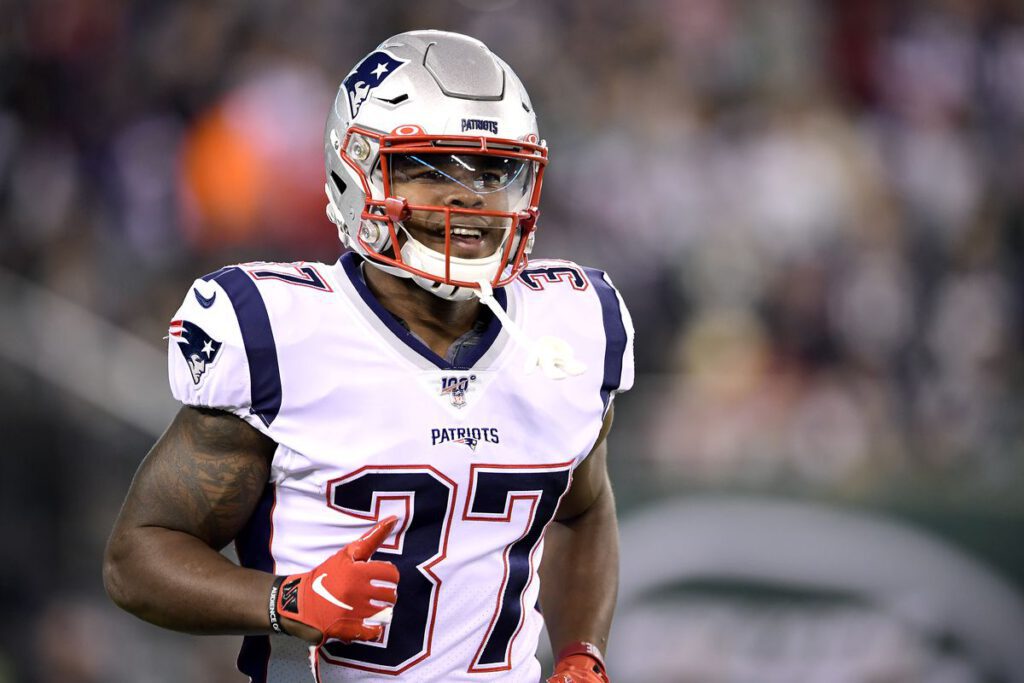 In an era where teams are devaluing the position, the Patriots are investing more capital in running backs than most teams in the league.

Although it’s spread out among six players, the Pats are fourth in spending at the position in 2020 at a shade over $14.6 million and spent two top 100 picks on running backs in the last three drafts.

As a result of their investments, Pats running backs combined for the fourth-most yards from scrimmage by the position last season.

Furthermore, the most valuable asset a running back brings to his offense is pass-catching, and the Pats had the second-most receiving yards by the position in 2019.

The value of a pass to wide receivers and tight ends surpasses that of running backs comfortably; throws to backs are inherently shorter and accumulate fewer yards on average.

Last season, the league average running back reception gained 7.9 yards while the average gain on throws to wide receivers and tight ends was 12.5.

For the Patriots, their wideouts and tight ends averaged 11.5 yards per catch compared to 9.4 by running backs, so it was closer, but production still favors receivers and tight ends.

The Patriots’ 9.4 average per reception was the second-highest in the league, though. For years, they’ve set the standard for designing plays for their backs and picking on mismatches.

Cool stuff here from Tom Brady on the 32-yarder to Rex Burkhead: Dorsett motions and is followed by the CB, a pre-snap indicator of man coverage. Brady moves Rex into the slot b/c he knows it'll be 1v1 against a LB. Drops a dime on the slot fade. #Patriots pic.twitter.com/onJKVZwlqh

Some of that was Tom Brady’s ability to identify pre-snap matchups for running backs against linebackers. But the scheme and game plan presents the quarterback with those opportunities.

#Patriots film: terrific design and execution on the screen to White for the go-ahead TD. Man coverage. Thuney recognizes and blocks the man on White, Edelman's crosser and fade by Meyers clears out the side, and Mason cuts down the linebacker. Really heads up play by Thuney. pic.twitter.com/5GlrpqcmEv

Plus, the Pats averaged 10.1 yards per play on screen passes to backs a year ago due to terrific designs and execution by those involved, including primary targets James White and Rex Burkhead.

The Patriots get their money’s worth, and even if you believe running back value is negligible in today’s game, it’s clear that a large portion of their offense runs through the backfield.

Let’s reset the running back depth chart which looks very similar to 2019:

Until Tom Brady left New England, the most controversial decision by Bill Belichick over the last three seasons was selecting Michel with the 31st overall pick in the 2018 draft. Michel struggles to create yards after contact and contribute as a receiver brings up questions of whether he was worthy of a first-round selection? There’s a lot of context needed in that discussion, including the fact that he was the Pats’ second first-rounder that year, but Michel is only slightly more valuable than a replacement-level running back.

In February, I examined Michel’s value to the offense using Pro Football Focus’s wins above replacement metric. The PFF formula concludes that Michel’s career WAR is 0.11, ranking 29th out of 83 qualifiers since 2018. Michel’s value comes in his ability to churn out difficult yards between the tackles by setting up his blocks and finishing runs with adequate power. He’s not the game-changing back that some thought he was coming out of college, and he’s one of the most predictable players in the NFL, as the Pats run the ball on nearly 70 percent of his snaps. But Michel is amid the most productive two-year start to a career for a Pats running back since Curtis Martin in the 1990s. It’s easy to see why the Patriots are happy with the pick, even if Michel didn’t turn into a star.

Out of the players remaining from the 2019 offense, White is the third-most valuable Patriot with a WAR of 0.18, trailing only Julian Edelman (0.34) and Joe Thuney (0.23). The Pats captain is a premier pass-catching back that moves around the formation and breaks ankles at the top of his routes with terrific separation quickness out of his breaks. He also improves every year as a ball carrier, running with a low center of gravity and outstanding contact balance to slip out of tackles. As the season wore on, opposing defenses began to scheme White out of games by putting their second-best coverage player on him or even doubling White at times, especially in the red zone. Entering his sixth NFL season, White is in the final year of his contract, making him one of many notable Patriots set to hit free agency in 2021. A contract extension might be coming for White, who represents everything the Pats want in a player.

Burkhead is the most complete back the Pats have in terms of ability as a ball carrier and receiver. However, his $3.9 million cap hit at a deep position with investments in younger, more affordable players, is interesting, especially factoring in his injury history. In his first three seasons in New England, Burkhead suited up for 37 of 55 games. The old Belichick would walk away from the veteran and give his snaps to Damien Harris, but the Pats love Burkhead’s running style and versatility. He’s a smart decision-maker and a north/south runner, making clean reads off of his keys with enough wiggle and burst to be effective. Burkhead’s 3.43 yards after contact average was by far the best on the team a year ago, and he’s also a key contributor in the passing game and on special teams. Despite his cap hit and Harris looming, Brukhead’s spot on the roster seems safe, barring a drastic swing in approach.

Bolden had some impressive highlights when given the opportunity on offense last season. The 30-year-old led all Pats running backs averaging 7.5 yards per play and turned 24 touches into four touchdowns, a limited but still notable sample size. Despite good offensive production, we all know why Bolden is here, which is to be an ace special teamer and a veteran leader. Bolden’s 314 special teams snaps, contributing on five different units, ranked third on the team behind only Matthew Slater and Justin Bethel, and his story of an undrafted rookie to eight-year pro resonates with a lot of players. He keeps things loose in the locker room, often blaring music and chatting with his teammates during media availability. Plus, he’s an excellent leader for younger players providing wisdom and a calming presence when things go poorly. Bolden’s roster spot and nearly $2 million cap hit might not resonate with all Pats fans. But he’s the type of guy you want to have on your team, and he excels in his role.

The Alabama product is taking a similar career path to past Pats draft picks such as James White and Shane Vereen, who also didn’t see the field much as rookies. Harris is going through the same growing pains as White and Vereen, trying to learn a complicated passing offense as a young player in New England. He is more than capable of contributing as a receiver and in pass protection, but it often takes a full year to learn all the intricacies of the Patriots’ system. The depth chart was also working against Harris in his first season. With Michel, White, Burkhead, and even Bolden ahead of him, Harris had a tough time cracking the game-day roster. If he were to receive playing time over Burkhead or Bolden, Harris will need to be a core special teamer, something he did at Alabama, but is still learning in New England. Harris’s elusiveness and ability to catch passes were two high notes of his preseason last August, and there is internal optimism that he’ll contribute in year two.

Taylor is one of three players we pegged as having the best chance to extend the 16-year run of an undrafted rookie making the initial roster in New England. The 5-foot-5, 185-pound Taylor has a similar stature and playing style as former Pats running back Dion Lewis. Despite his size, Taylor runs with good power behind his pads due to terrific balance while using his height to his advantage as a low center of gravity. He doesn’t possess breakaway speed with a 4.61-second 40-yard dash at the combine. But he’s a handful to wrap up with tremendous cuts in tight spaces and is a difficult cover at the top of routes due to his quickness. Taylor was also a big-time producer as a returner at Arizona with experience on both kickoffs and punts. Taylor has an uphill battle cracking one of the deepest position groups on the roster, and his limitations in pass protection might be difficult to overcome. But his skill as a receiver makes him an excellent fit in a third-down back role.