The film showed that despite the win, the Patriots performance on Sunday vs the Steelers was a mixed bag. 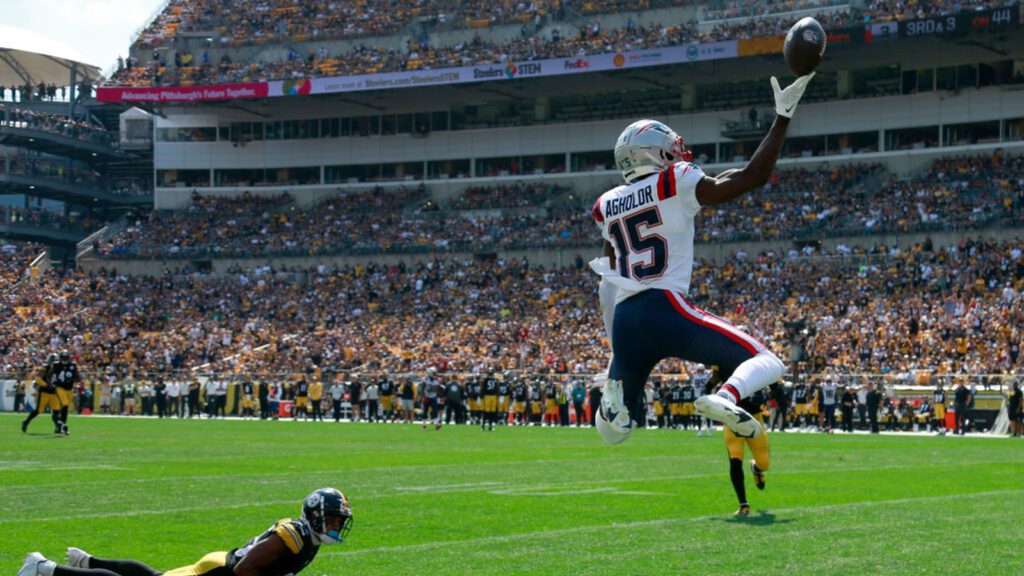 The Patriots pulled out a win in a hostile environment on Sunday, beating the Steelers in the always feisty Heinz Field (I refuse to call it the other thing). It’s hard to win in the NFL, so this victory should be favored. There were signs of life from the offense, the defense clamped down when necessary, and special teamer Brenden Schooler helped set up a score on the punt team.

While there were more reasons for optimism than the team provided in last week’s loss to the Dolphins, there were still issues that must be addressed.

Here are my initial highs and lows from the Patriots’ victory against the Steelers.

Mac Jones is known for his decision-making and ball security, so his pair of turnover-worthy plays in Pittsburgh came as unpleasant surprises.

The first came on a shot to Parker over the middle. Jones tries to look off coverage by initially bringing his eyes to the right, but Minkah Fitzpatrick is unfazed as the deep 1/2 defender in Cover 2. When Jones brings his vision right to Parker, he fails to confirm the coverage and lofts a floater that’s begging to be picked.

Though Jones’ eye manipulation is advanced for his age, looking off the wrong defender has been an issue since last season. The most notable example was his interception in the Wild Card Round vs the Bills, where Jones pump-faked a defender who wasn’t looking at him and helped lead post-safety Micah Hyde to the catch point.

Later in Sunday’s game, Jones was nearly picked on a play similar to his interception against the Raiders this preseason. Jones escaped pressure and tried to make a pass across his body, but didn’t see a defender creep into the window and hit Cameron Sutton right in the chest.

A turnover-averse player like Jones should correct these issues before they snowball, but it is impossible to ignore such glaring mistakes. Hopefully, more confidence and rapport with his supporting cast will lead to fewer of these head-scratchers.

On a day where the passing game seemed pedestrian and out of sync, Jakobi Meyers and Nelson Agholor were the only Patriots receivers to total 20+ receiving yards.

Agholor led the charge with over 100 receiving yards and had the play of the game on a deep shot vs on 3rd down man coverage.

Jones gives his receiver a chance to make a play against tight coverage, and Agholor rewards him by summoning the spirit of Randy Moss and keeping his feet for a long score.

Bill Belichick acknowledged after the game that “Nelly” has been one of the team’s most consistent receivers, and Mac Jones said the effort will give him more confidence in taking those shots in the future.

Jakobi Meyers was Jakobi Meyers, moving the chains on 3rd down and exploiting the Steelers’ soft zone coverage. The team’s longest-tenured wide receiver is still the focal point of the passing game and by far their most consistent player.

Parker and Mac Jones seemed to have instant chemistry in training camp, but the former Dolphin has been a disappointment in live action.

The two don’t seem to be on the same page when passes come Parker’s way, and separation has been minimal. Jones’ tendency to target Parker almost exclusively downfield is also concerning, as a one-dimensional player is much easier to scheme for.

Agholor had his issues on the perimeter last season, but he stood out in his first game as a Patriot and was at least productive on curl routes.

It’s still early, and the team is trying to figure out how to best utilize its players. But in a group that desperately needs people to step up, Parker’s silence has been deafening.

After giving up a pair of critical sacks in the season opener, the Patriots’ offensive line didn’t allow a single takedown vs the Steelers’ formidable defensive front. The unit seemed to hold up well against Pittsburgh’s stunts and blitzes, and rookie Cole Strange had an excellent showing against All-Pro Cameron Heyward. The Steelers made life hard on Joe Burrow last week even without T.J. Watt, so this was no small feat for a group that’s received heavy scrutiny.

The Patriots also had consistent success running the rock, keeping the offense out of bad situations on 2nd down, and punching it into the end zone off a muffed punt by old friend Gunner Olszewski. New England’s strong day on the ground was punctuated by a 4-minute drive where gap and pin-pull concepts prevented a Steelers comeback attempt. Adding to Strange’s impressive day, his athleticism was key to the success of these concepts.

The offense had multiple penalties that put them in long yardage situations on Sunday, most of which led to failed 3rd downs and punts.

Their first infraction was a delay of game in the red zone, which turned 3rd & 7 on the Steelers’ 15-yard line to a much more daunting 3rd & 13.

The second penalty came on one of the Steelers’ few pressures, where immediate interior pressure led to a David Andrews hold and Mac Jones intentional grounding call. This resulted in a loss of downs and 3rd & 16, but New England was pushed further back by an Isaiah Wynn hold that made a conversion virtually impossible.

The Patriots were also flagged for two false starts by Wynn and Mike Onwenu, as well as holding calls on David Andrews and Jakobi Meyers (though Andrews’ may have been a blown call).

The offense thrives in 3rd & manageable situations, but putting themselves in spots where defenses know they’re going downfield isn’t a winning business model.

Matthew Judon was mostly quiet as a pass rusher on Sunday, but the film should provide a better answer for why than an initial broadcast viewing.

For now, Judon deserves recognition for two plays made in critical situations.

On the first, pressure off a dominant rep from Christian Barmore forces Trubisky out of the pocket during a 2-minute drill. Judon, after looping inside on a twist, shows great effort chasing down the athletic passer and creating a negative play to keep Pittsburgh out of field goal range.

Later, on the Steelers’ final drive of the game, Judon finds himself in the unenviable position of chasing Najee Harris on a wheel after peeling with the back. Judon doesn’t panic, plays the hands like a defensive back, and affects the catch-point to end the drive.

The game plan for the Patriots’ pass defense was simple this week, prevent big plays and force Mitchell Trubisky to put long drives together.

Their plan worked for the most part, but Jalen Mills was on the wrong end of Pittsburgh’s few offensive highlights.

The two-point conversion he allowed to Diontae Johnson was a spectacular play by the receiver, but Mills allowed two first downs from soft coverage despite having leverage on the routes. This included a 3rd & 17 situation where Johnson forced a speed turn after Mills bit on an inside lean.

Mills also failed to funnel his receiver inside as the cloud defender in Cover 2, leading to an easy downfield completion at the end of the half.

Not an awful day for Mills, but one where he likely wishes he’d been more competitive.