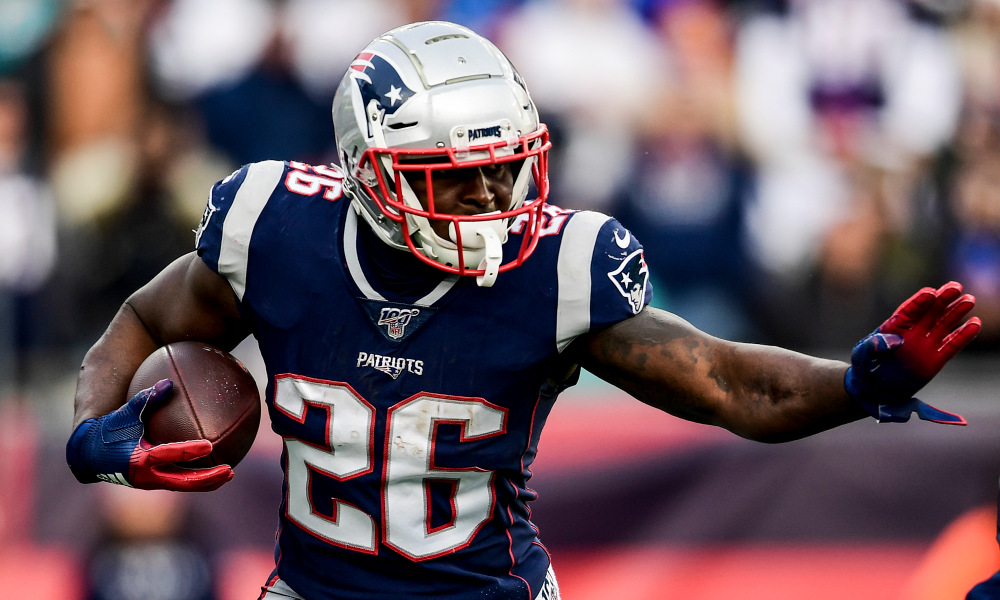 FOXBOROUGH, MA - DECEMBER 29: Sony Michel #26 of the New England Patriots carries the ball during the third quarter of a game against the Miami Dolphins at Gillette Stadium on December 29, 2019 in Foxborough, Massachusetts. (Photo by Billie Weiss/Getty Images)
Share
Facebook Twitter Email

The group led by Sony Michel, James White, and Rex Burkhead combined for the second-most touches and the fourth-most scrimmage yards in 2019.

However, New England’s overall rushing success took a noticeable hit due to several reasons despite plenty of depth at the running back position.

The Patriots went from ninth in rushing defense-adjusted value over average (DVOA) in their 2018 championship season to 15th in rushing DVOA last season. Most of that stems from a downtick in blocking effectiveness, going from the third-best run-blocking offensive line to ninth, which was exacerbated by injuries (David Andrews, James Develin) and retirements (Rob Gronkowski).

Most of a team’s rushing success depends on the blockers leading the way, but individual ball carriers can elevate their teams’ rushing attacks by creating yards after contact.

Some of New England’s issues stemmed from its running backs failing to create their own yards, mainly Michel, who was 46th out of 61 eligible running backs in Pro Football Focus’s elusive rating.

As a unit, the Pats running backs tied for 25th in yards after contact per rush (2.6). Out of running backs with at least 60 carries last season, Burkhead was the only Pats back to finish in the top half of the league in elusive rating, which measures the impact of a runner with the ball independently of the blocking in front of him.

Although the Patriots also got significant contributions from White and Burkhead in the passing game, finding a lead back that can create his own yards could push Michel out of the top spot.

Since 2018, Michel’s 541 carries, including the postseason, are the third-most in the NFL as the first-round pick has immediately become the bell cow back for New England.

But along with ranking poorly in elusive rating, Michel is also 51st out of 64 qualified running backs in forced missed tackle rate; he has been one of the least slippery backs in the league, mainly only getting what’s blocked.

New England has two candidates in second-year running back Damien Harris and undrafted rookie J.J. Taylor that could add their flavor to the Pats running game.

Due to the coronavirus pandemic, Patriots veteran Brandon Bolden decided to opt-out of the season, which only improves Harris and Taylor’s odds of making an impact.

Never a bad time to watch James White breaking ankles. Here are some of his best ankle-breakers from last season. #Patriots pic.twitter.com/w2tzNA2MIN

The Pats premier pass-catching back came in at number eight on our most important Patriots rankings this season. White’s route-running and skill after the catch make him one of the most dangerous receivers out of the backfield in the NFL. Last season, he ranked third among running backs in both yards per route run (1.91) and receiving yards. White was also a big-time red-zone weapon with the sixth-most touchdowns since 2018 from inside the 20 (11). We know Sweet Feet is good. The only concern for the coaching staff is avoiding overuse since it’s tempting to keep feeding him the ball. Over the last two seasons, White has averaged 11.6 touches per game in the first nine weeks. In the second half of the year, his touches per game dropped to 8.7. There’s a fine line between too much work and not enough that the Patriots are dancing around.

Sony’s best game with the #Patriots: Week 12, 2018 vs NYJ. Feels like that’s his peak performance. #Jets shut down the lead play with Develin. Great vision to cut off that double by Thuney/Andrews instead of following Develin, sets up Brown’s block for more yardage. Nice run. pic.twitter.com/CR5QeMUclI

According to The Athletic’s Jeff Howe, Michel might miss practice time due to offseason foot surgery, but could avoid the PUP list thanks to the longer ramp up this summer. Although we led with the negative slant on Michel, there are positives about the third-year running back. Sony’s rushing style lets the Patriots get into their power running game out of heavy personnel groupings. With Michel in the backfield, the Pats averaged 7.8 yards per pass attempt compared to 6.5 when he’s not in the game over the last two seasons, despite little contribution from Michel as a pass-catcher. The reason for that is New England’s run formations set up a potent play-action passing attack. Since the Patriots want to incorporate a fullback and play-action passes often, Michel’s toughness between the tackles and ability to set up his blocks effectively allows them to be that kind of offense. As a first-round pick, many were expecting Michel to be great. He’s good, not great, and stylistically, gets the job done. At this point, we’ve given up hope that Michel will develop into a useful receiver. But we’ll see in camp if he has any more wiggle and if he can be a more north/south runner. In 2019, Michel ranked 42nd out of 49 running backs in Next Gen Stats’s efficiency percentage metric, which takes the total distance ran by the ball carrier and divides it by rushing yards gained. Michel is not an overly efficient runner nor is he elusive. The pressure is on in the back half of his rookie deal.

Probably one of the best jump cuts I’ve seen from Rex Burkhead. #Patriots running lead ISO again from the strong I with Develin. Karras gets beat by Tuitt and Rex jukes him out of his shoes. Great run. pic.twitter.com/amXu0huxeo

Based on the metrics, Burkhead was New England’s most effective ball carrier last season. In 2019, Burkhead ranked ninth among eligible running backs in yards after contact per rush (3.43), putting him ahead of highly-touted backs such as Saquon Barkley and Ezekiel Elliott. He also had five receptions of 20 or more yards and is the only true dual-threat back on the roster. Burkhead took the Danny Amendola route this offseason by agreeing to a pay cut to ensure his roster spot with Harris and Taylor breathing down his neck. There are durability concerns with Rex, which limit his workload, but he’s versatile and extremely effective with the ball in his hands. Expect him to stick around for another season.

Damien Harris picks up 30 yards on back-to-back plays. Made it look pretty easy. Make the first defender miss after the catch, see the cut back lane on the 20-yarder. #Patriots pic.twitter.com/al4LgdH6DR

Out of all the offseason storylines surrounding the Patriots, Harris’s year-two playing time garners the most questions of any player on the team. The 2019 third-round pick had a lot working against him as a rookie. For starters, he had four veterans ahead of him on the depth chart that all stayed healthy, meaning the opportunity never presented itself for Harris to break out. That put Harris on the James White, Shan Vereen plan learning behind the vets in his first season, which is standard for non-first round running backs under Belichick. The talk from the practice field was that Harris was still mentally grasping the Pats offense, from things like knowing his run reads and responsibilities in pass protection. Plus, Burkhead and Bolden’s value on special teams was important on game day. Still, Harris averaged three yards after contact per rush with an elusive rating of 60.0 during his rookie preseason, showing some impressive lateral cuts to slip tackles and versatility to do it all out of the backfield. Michel’s underwhelming second season opened the door for Harris. Based on his college and preseason tape, it’s time to see what the Alabama product can do.

Could watch him run angle routes out of the backfield all day. pic.twitter.com/zyJHVTdpvX

Due to his size and playing style, it’s easy to see former Pats running back Dion Lewis in Taylor. Taylor is a compact runner that makes people miss in a phone booth with sharp jump cuts, terrific balance to stack multiple moves together, and more power than you’d expect for a 185-pound back. He’s also a threat as a pass-catcher and can contribute in the return game as well. The Arizona product had an uphill battle to make the roster due to New England’s depth at the position, but Bolden opting out presents him with an opportunity. If he can have a Lewis-like training camp where he bursts onto the scene, and maybe contribute as a returner where the Pats need to replace Bolden on kickoffs, he has a real shot at making the initial roster. If not, protecting him on the practice squad as a part of the coronavirus protocols makes a lot of sense. Taylor could be the Patriots’ third-down back of the future.