The Ravens are in town for the Patriots 2022 home opener. Here's how I see it playing out. 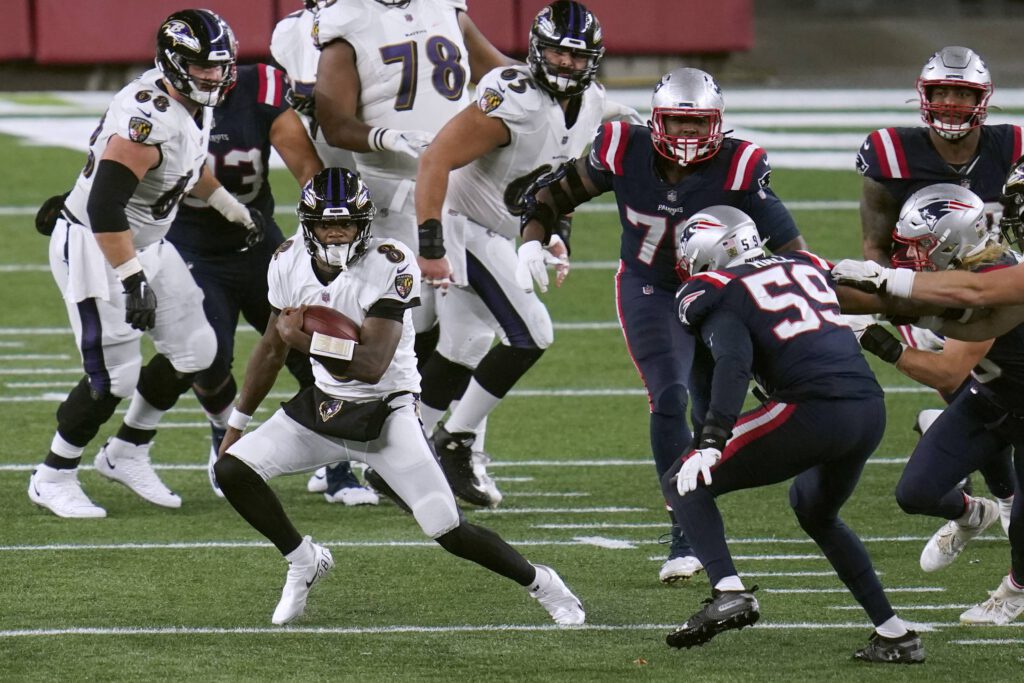 The Patriots got themselves in the win column last weekend for the first time in 2022. They went into Pittsburgh, fought hard, and beat the Steelers 17-14 in what was an all around ugly matchup.

However, a win’s a win. They now welcome in the AFC North leading Baltimore Ravens on Sunday for their 2022 home opener. The game will kickoff at 1pm with Joe Davis and Daryl Johnston on the call for FOX.

Here are the betting odds for the matchup from our exclusive wagering partners at BetOnline.ag:

The last time the Patriots played the Ravens was in 2020. It was the NFL’s COVID year, and New England won 23-17 thanks to a last-second monsoon that came in and stopped QB Lamar Jackson from leading a game winning drive. Two years later, both teams are in uniquely different situations.

The Patriots have continued on in their rebuild in the post-Tom Brady era, drafting quarterback Mac Jones to be their future at the position and bringing back coaches Matt Patricia and Joe Judge to man a new “streamlined” offense to try and compete in today’s NFL. It hasn’t gone nearly as smooth as I’m sure the organization would have hoped, but we’re only two weeks into the thing. Sunday’s game will be telling.

The Ravens, meanwhile, have been on the straight and narrow since 2020 – but are now faced with the dreaded “do we pay our quarterback?” question. Lamar Jackson is clear-cut top-10 quarterback in the NFL, and how he’s looking to get paid like one. He has called off negotiations now that the season has begun and will likely end up on the franchise tag in 2023.

New England’s running back room has always been the center of attention in this offense. They rely heavily on their run game to be the meat and potatoes of the offense and have always looked to a stable of backs to get the job done.

The injury to Ty Montgomery has certainly changed this. Last week, New England gave the bulk of the RB snaps to Damien Harris and Rhamondre Stevenson. Though Harris has been a full participant in practice this week, he went down with an injury at the end of the Steelers game. I wonder if Stevenson will carry the load against Baltimore.

Agholor had a career day last Sunday in Pittsburgh.  He hauled in six catches, one of which was a touchdown, and put up his first 100-yard receiving game as a Patriot. It was the first 100-yard, 1 TD game from a New England receiver since Damiere Byrd during the 2020 Cam Newton year.

With DeVante Parker struggling to emerge as a top pass-catcher for the New England offense, I’m sure they’ll look to Agholor to command the target-share again this weekend.

With dominant box safety Kyle Dugger nursing a knee injury and his status up in the air for Sunday, Jabrill Peppers is the most likely candidate to step into his place.

The former Brown and Giant put up three tackles in Dugger’s absence agains the Steelers, and will look to fill his gap against Baltimore.

As I said above, Lamar Jackson is a clear cut top-10 quarterback in the NFL. He’s thrown six TD’s to just one INT so far in 2022, and has 136 yards rushing and a touchdown. Jackson’s also averaging a career high 9.1 yards per carry.

If Baltimore wants to win this weekend, they’ll need to rely on Jackson to run the offense to a T – unlike they did in the second half against Miami last week.

Rashod Bateman has turned into Baltimore’s number one wide receiver since they traded Hollywood Brown to the Arizona Cardinals this offseason. He has six catches through the team’s first two games and a touchdown in each. He’s also averaging an insane 27.8 yards per catch. I’ll be interested to see how the Patriots decide to cover him in week three.

Call me crazy, but I think the Patriots get to 2-1 on Sunday. The last time these two teams played, the Cam Newton Pats were able to take down the Ravens. I think the same happens this weekend.

Mac plays better football in Foxboro, and Belichick can devise a plan to get after Lamar Jackson and the Baltimore offense. The key will be New England playing from ahead. If they do that, they’ll win this football game.