Paul Pierce said he expects Ray Allen and Kevin Garnett to reunite soon in an exclusive interview with CLNS Media. 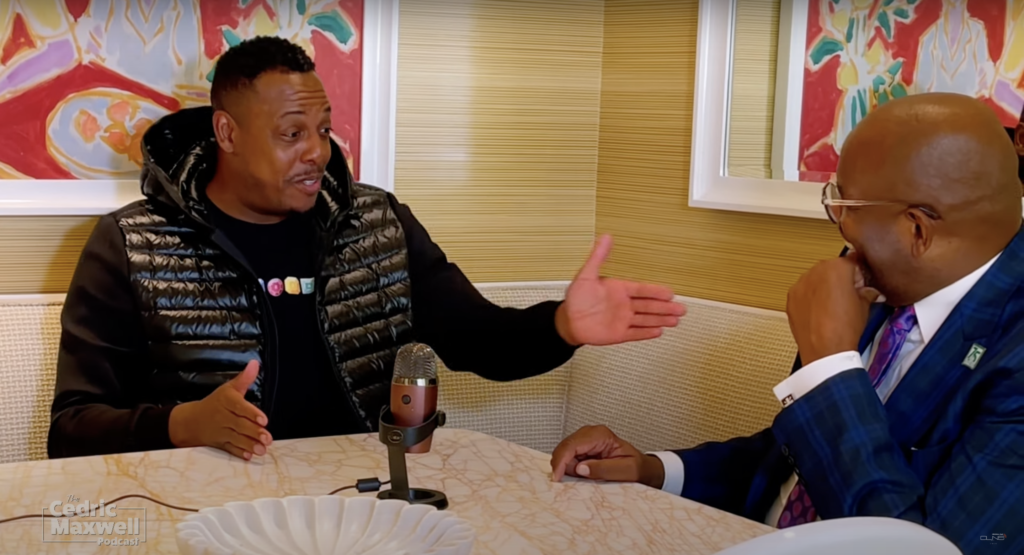 The ice separating Paul Pierce and Kevin Garnett from their fellow Celtics champion Ray Allen appears to be thawing. Garnett congratulated “WALTER ‘RAY'” alongside Pierce in an Instagram story following the trio’s selection to the NBA 75th anniversary team. Now, as Pierce and Garnett, neighbors, teammates and friends, prepare their podcast with Showtime, it could become the eventual reunion space for the duo. Pierce hopes so.

“You just gave me an idea Max,” Pierce told Cedric Maxwell in a CLNS Media exclusive this week. “Me and KG are going to do a show … I think Ray Allen should be our first guest.”

Allen, Pierce and Doc Rivers talked at Garnett’s Hall of Fame induction, Rivers making an effort to accelerate the reunification of Boston’s new Big Three. Allen fell out from the band of 2008 champs after departing for the Heat following a bitter 7-game defeat in the 2012 east finals. Garnett took the departure hardest, calling it sensitive in 2017 alongside Rajon Rondo, Glen Davis, Kendrick Perkins and Pierce. Allen moved on, he said then.

Pierce discussed the hurt and brotherhood Allen broke, along with the lack of notice he gave his former teammates in that Area 21 roundtable. They hadn’t talked to Allen in years then. Now, on CLNS Media’s Cedric Maxwell Podcast, Pierce portrayed an entirely different dynamic than even one year ago. It provides some hope that Allen, absent from TD Garden from his departure, could appear in-person for Garnett’s jersey retirement on Mar. 13.

“Me and Ray pretty much mended our differences,” Pierce told Maxwell. “KG is still on the fence, but I think our conversation with Doc kind of smoothed things over to where you’re going to see us together pretty soon.”

Rivers told CLNS last year he wished he made a stronger effort to have Allen join the Pierce jersey retirement in 2018. He said then he would make the push to get Allen in the house for Garnett’s turn, adding Allen would be surprised at the ovation Boston would give him. Tony Allen came up with his own plan to link the two legends.

Allen, hurt himself, said to CLNS that month he did not see himself in Boston or attending the Garnett event. It would take a conversation with Garnett for that to happen. One now possible on the podcast.

“It’s 2020, so you’re talking about nine years now,” Allen said. “I’ve gotten so much hate, death threats, vitriol from Boston fans. Obviously these guys have kind of removed me from the big three, said so many negative things about me … we’re brothers, we went through a lot, but that doesn’t change anything we’ve done. It hurt me over the course of this time just to hear some of the things that have been said.”

Pierce also hit on the Ben Simmons and Kyrie Irving sagas, the current band of young Celtics making a push toward their own first championship similar to what Pierce went threw. He reflected on his path to the NBA 75 list, and weighed some snubs as the basketball world debates the edges of who made it and didn’t.

Rivers is at the center of the Simmons trade demand that took over the headlines during the NBA offseason’s final month and into its opening week. Simmons returned unannounced after his camp claimed he’d never play in Philadelphia again, the team suspended him for opening night after Simmons reportedly refused to do a defensive drill and he got kicked out of practice. This week, he told his teammates he isn’t mentally ready to play.

Pierce thinks someone will have to step up to overcome the loss of Simmons. He doesn’t feel the same way about Irving’s absence though, which he believes Kevin Durant and James Harden can overcome. The trio would be magical, but the duo alone can win a championship. The Lakers reminded Pierce of the 2010 Celtics, who he thinks need to just stay healthy until playoff time and have everything they need on paper.

Vince Carter, Tracy McGrady and Dwight Howard rank among his biggest NBA snubs, with Yao Ming unmentioned on many 75th anniversary snubs, he said. Draymond Green, to Pierce, does not qualify as a snub.

Pierce reflect on the latest transition in his post-playing career too, bouncing back quickly from his firing at ESPN. He viewed that situation as simply one door closing to open others. Now, he’ll be working with DraftKings, launching his own cannabis brand, ‘Truth,’ the podcast and talked to Mike Gorman about doing some sideline work for certain Celtics games this season.

“I think that’s what it’s really all about,” Pierce said. “I remember just, as a young player coming in, seeing you (Maxwell) on the sideline, Tommy Heinsohn, Cousy in the building, Russell. I think it’s our job, it’s important for us to comfort this generation also. That’s what I want to do during the year, I want to come back, be a face in the stands, you know something they can hold their hat to. KG, gon’ bring him back, Ray. So we can sit in the stands, because that’s what Celtics family, Celtics pride is all about. The players of the past coming back and supporting the players of the present.”