Boston has offered up one of their franchise cornerstones in return for the Nets star. 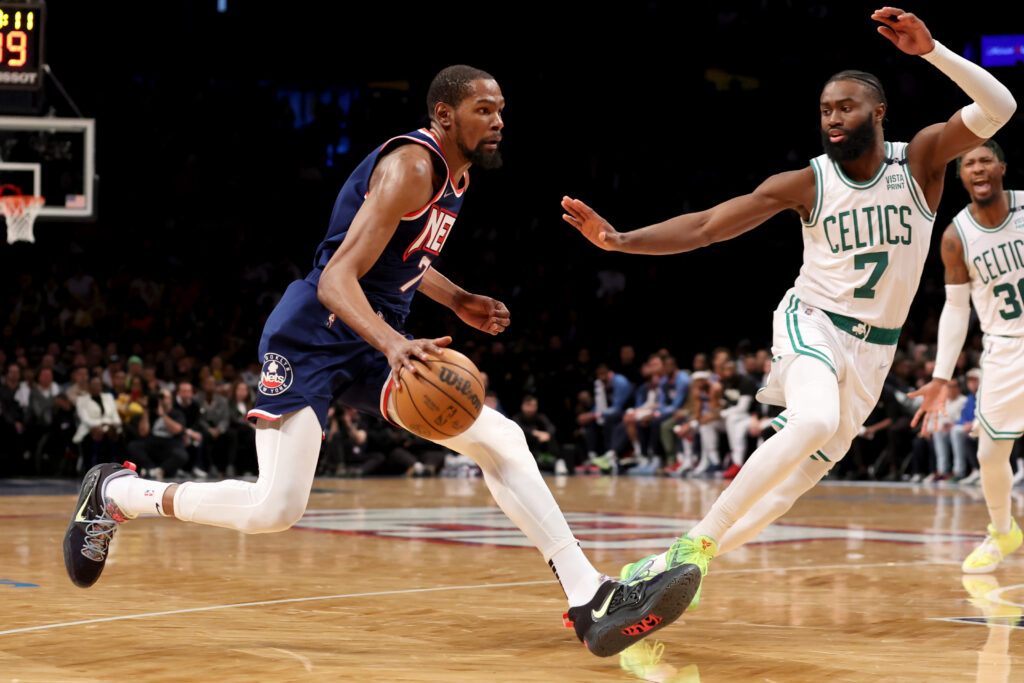 A Woj Bomb was not something I expected to wake up to as I rolled over in bed at 3am this morning.

However – ESPN’s Adrian Wojnarowski dropped one on us – as at 2:31am he tweeted out, “As Brooklyn Nets star Kevin Durant’s trade request approaches its fourth week, the Boston Celtics have emerged among teams engaged in talks on a possible deal.”

The Athletic’s Shams Charania followed this report up with further details – explaining that Boston offered Jaylen Brown, Derrick White, and a draft pick to the Nets for Durant. This was rejected – and Brooklyn has asked Boston to include Brown, Marcus Smart, draft picks and potentially one more rotation player in a trade.

The Celtics are now mulling this over.

According to our gambling partners at BetOnline.ag, Boston has emerged as the favorite to win the title next season amid these Durant rumors. Here are their top five:

I am fascinated to see how this whole thing plays out.

On one hand, Boston was just two games away from winning the Finals last year. Jaylen Brown was your best player in the series – and is still only 24 years old. Plus, Marcus Smart is the reigning Defensive Player of the Year. How do you not run it back with those two guys?

But, at the same time, they were two games away from winning the Finals last year – and could add Kevin Durant alongside Jayson Tatum. This puts two top five NBA players next to eachother on the court.

Boston just traded for guard Malcolm Brogdon, which in theory makes Marcus Smart expendable. Though he is the reigning DPOY – there has been criticisms about his offensive game for years, and this is the highest his trade value will be. Here’s what a presumed rotation could look like with the addition of Durant:

Though it’s small, if you add a rotational big man, that team wins the 2022-23 NBA Finals.

Celtics fans are bothered by the fact that Durant is trying to flee from Brooklyn with four years still left on his deal – and could do the same thing here. I don’t think we’d have to worry about that. He played out his contracts in Oklahoma City and Golden State. The structure here with Brad Stevens, Ime, and Jayson Tatum is far superior than what Nets have with Steve Nash and Kyrie Irving.

This thing’s getting real – fast. We’ll see how it plays out.