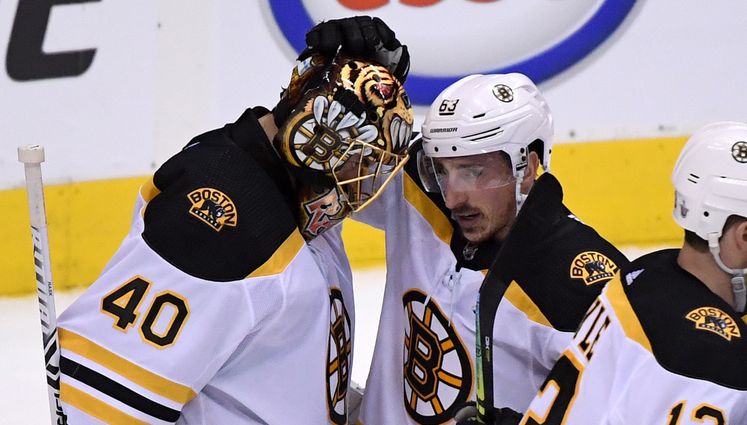 The Bruins – behind goaltender Jaro Halak – put together an impressive performance on Saturday, defeating the Carolina Hurricanes 3-1 to give Boston a 2-1 series lead. But all the focus after the game was not on the performance, or Jalak but rather Tuuka Rask’s shocking announcement before the game that he was opting out of the rest of the NHL Playoffs.

Head coach Bruce Cassidy and Bruins players were informed of the decision shortly before departing for game 3.

“I found out this morning through Donnie [Sweeney], I think Tuukka spoke with Cam [Neely] and Donnie about his decision and he relayed that to me,” Cassidy said. “So not going to change the way we play, but it is a bit of a shocker at first.”

While the sudden change in goal came as a shock to members of the black and gold, they understood Rask’s decision to opt out.

“I think that we found out shortly before departure of the bus,” Bruins captain Zdeno Chara said. “Obviously our first concern is the health and safety of his family. That’s the most important thing we were all kind of thinking about and obviously we support Tuukka’s decision. There is nothing more important than your family.”

“We’re behind him and we understand,” Berferon said. “Family comes first. We’ve always said that. Obviously, we’re a tight group in this locker room. We’ve been together for a while and supporting each other.”

The decision by Rask to leave the bubble left Cassidy with no choice but to play backup goaltender Jaraoslav Halak on Saturday. Rask was coming off a terrific regular season—posting a .929 save percentage and 2.12 goals against average—but the veteran Halak had himself a great season in his own right.

With a .919 save percentage and 2.39 goals against average, the drop from a player of Rask’s caliber to Halak wasn’t as precipitous as it might have been on other teams.

The talent was evident in Saturday’s 3-1 win as Halak allowed just one shot of 30 into the back of his net, the lone goal a result of a misplay that left him in no position to make a stop.

“We are here as one family,” Halak said. “There are obviously more important things than hockey in life. He’s going to be at home, so I support his decision and I just want to step in and help the guys. I think they will do the same for me.

“Now we have to focus on hockey. I think today was an example that we just needed to get out there and try to win a game. We have a lead in the series, but it doesn’t mean anything. We still have to win a couple more, and it’s going to be hard because they play hard.”

The Bruins will now have to rely on Halak as they attempt to make a second-consecutive run to the Stanley Cup Final. While its anything but a guarantee, the Bruins are confident they have what it takes, no matter who is in net.

“It could [galvanize the team], it very well could,” Cassidy said. “You know now it could be [Halak’s] turn to have a nice run. I think it’s in the back of everyone’s mind. If we want to reach our goals, we’re going to need a goaltender in there to help us get there. So maybe this is Jaro’s year. Tuukka had a great run last year.”