The ankle procedure that many want to see Patriots quarterback Mac Jones undergo is a newfound phenomenon in the medical world. 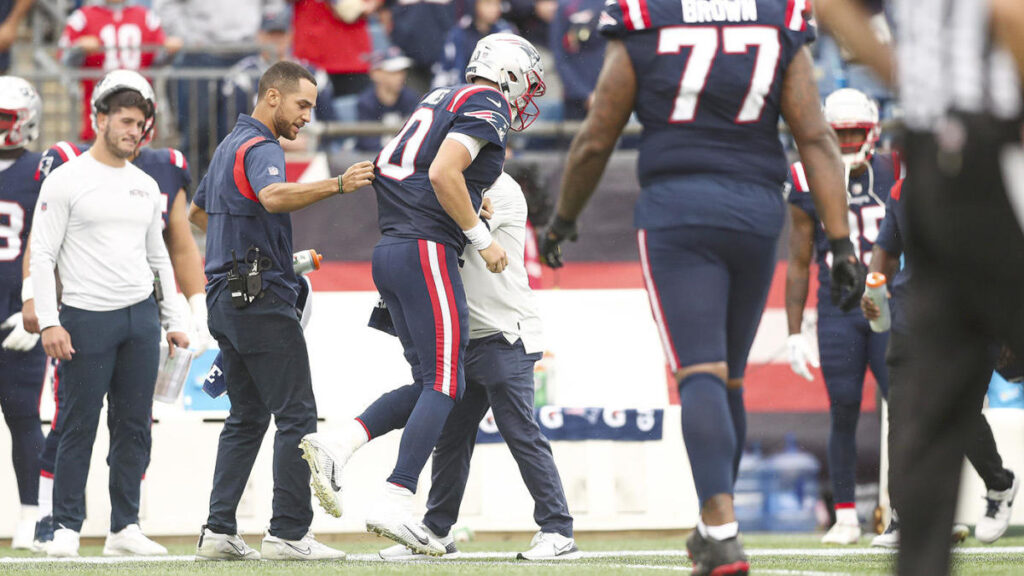 FOXBOROUGH, MASSACHUSETTS - SEPTEMBER 25: Quarterback Mac Jones #10 of the New England Patriots is helped off the field during the fourth quarter against the Baltimore Ravens at Gillette Stadium on September 25, 2022 in Foxborough, Massachusetts. (Photo by Adam Glanzman/Getty Images)
Share
Facebook Twitter Email

Whether Bill Belichick wants to admit it or not, Mac Jones has a high ankle sprain. The quarterback was rolled up on during the team’s 37-26 loss to the Ravens on Sunday – and according to Adam Schefter, “has what doctors diagnosed as a severe high ankle sprain that would cause many to have surgery… He is likely to miss multiple games.”

The surgery Schefter is alluding to is a newly developed procedure called “tightrope” surgery, which typically allows athletes to get back on the field faster following a high ankle sprain.

In fact, when Jones was at Alabama, two of his teammates (Jalen Hurts and Tua Tagovailoa), underwent the procedure – and Jones was quoted saying, “we’ve had guys that came back pretty fast. Insanely fast. It’s unbelievable.”

Well now, it may be his turn.  I asked Mac on Monday if this could be an avenue he’d take in order to get back on the field. Here’s what he told me:

“Yeah I’m just kind of taking it day-to-day and making sure everything’s good. Honestly, any injury questions are Coach Belichick’s thing. So I’m not here to answer them. I appreciate everyone kind of reaching out and looking out for me. But it’s kind of just a day-to-day thing. I’m just trying to get better.”

But what is this “tightrope surgery”? Many have mentioned it over the last several days, but I have yet to hear about what it actually is. So, in this politically charged climate where “doing your own research” is highly recommended, I decided to do just that:

According to The Centers for Advanced Orthopaedics, where I got the bulk of my information, the “tightrope”  device, (created and manufactured by Arthrex), is implanted into the patients ankle in order to stabilize the syndesmosis after a lower leg injury. The “syndesmosis”, of course, are the ligaments that connect the fibula and tibula.

An older version of invasive surgery that was designed to aide in high ankle sprain recovery, “involved using 2 metal screws to stabilize the fibula to the tibia. These screws are rigid and would have to be removed at a later date, thus requiring a second surgery.” This second invasive procedure is what hindered the athletes rehab process.

However, this new tightrope version of the procedure, “allows the syndesmosis to be stabilized in a flexible manner, keeping the natural motion between the tibia and fibula.” The flexible fixation does not require a second surgery, allowing athletes to hop into rehab quicker, and ultimately get back onto the field.

According to ESPN’s Adam Schefter, “Jones and the Patriots still are discussing his options and the best way to proceed,” and after all, Bill Belichick told us (about 100 times), that they’re taking it “day by day“.

So let’s do just that. Today,  September 28th, 2022, it is likely that we will see backup quarterback Brian Hoyer under center against the Packers on Sunday.