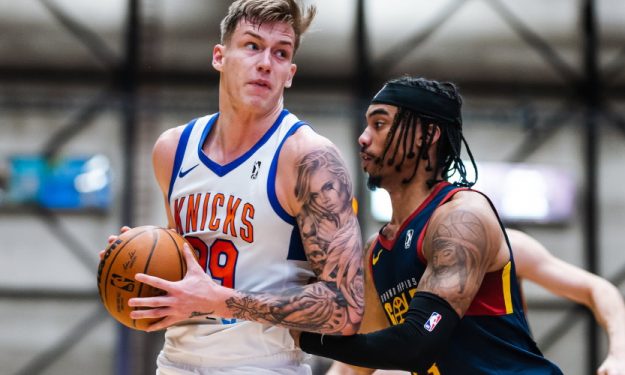 The Celtics will move quickly to replace Bruno Caboclo after waiving him on Wednesday, with sources telling CLNS Media the team plans to sign 22-year-old, 6-10 Croatian forward Luka Šamanić to a training camp deal. He’ll join the mix of veterans competing for roster spots after last playing for the Westchester Knicks in January.

Boston officially signed Jake Layman, Justin Jackson and Denzel Valentine last week, as CLNS first reported, while MassLive indicated the team’s Summer League forward Brodric Thomas could rejoin the Celtics on a camp deal to round out the roster at 20.

The team still has three regular season spots left to offer, but staying at the offseason limit with tryout deals likely reflects a patient approach being followed in the aftermath of Robert Williams III and Danilo Gallinari’s injuries that will impact the early season front court depth. Al Horford, Grant Williams, Luke Kornet, Sam Hauser and Mfiondu Kabengele are the only rostered players who stand to fill the front court depth. Noah Vonleh and Šamanić will have the chance to prove their abilities in the preseason, as well as fill minutes in scrimmages and practice that Williams III won’t be able to.

The Spurs drafted Šamanić No. 19 overall in 2019 from Olimpija Ljubljana after a season with FC Barcelona’s reserve team. He spent most of his rookie season with G-League Austin and averaged 15.2 points, 7.8 rebounds and 3.1 turnovers per game while shooting 43.1% from the field. San Antonio played him 33 times with the NBA team in his second season, where he mostly struggled before not making it past roster cuts before 2021-22.

The Knicks signed him to a two-way contract last season before funneling him to G-League Westchester, where he dominated the league’s Showcase Cup with 27.9 PPG, 10.6 RPG and 3.3 APG on 54.9% shooting and saw his three-pointer bump to 41.5% on 41 attempts. Šamanić hit his free throws (18-20), though his turnovers remained high (29 in seven games).

“He’s a really skilled player at a position that now is requiring great skill in our league,” Spurs GM RC Buford said in 2019. “He’s got to tighten up his game. He’s got to get better physically, but from a skill and talent standpoint, we felt like we were acquiring someone that would fit in with the development of a lot of our young guys.”