Where will quarterback Jimmy Garoppolo play next season? 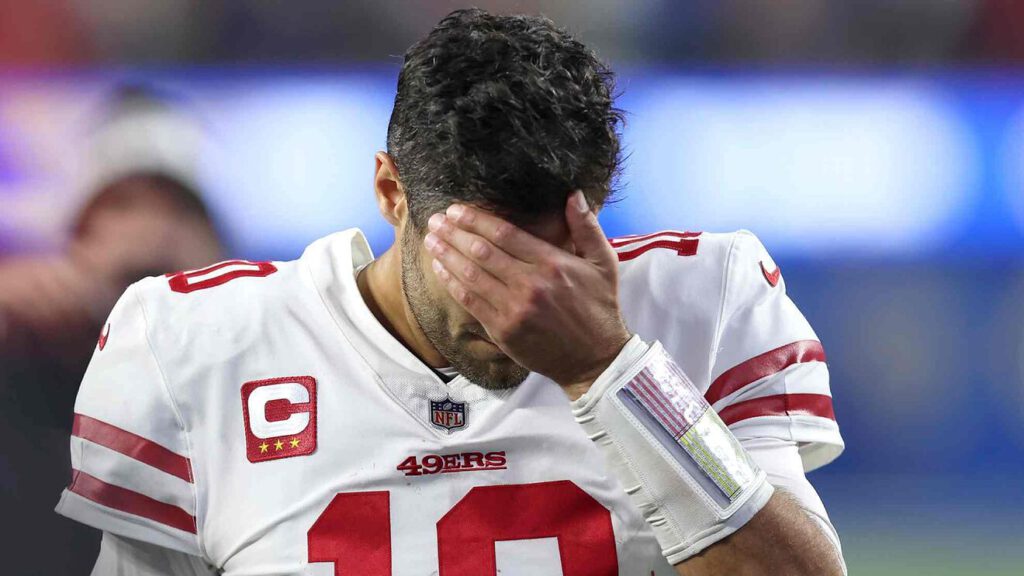 Now that the dust has settled after San Francisco’s heartbreaking loss to the Rams in Sunday’s NFC Championship game, it’s time for the 49ers to figure out where to go from here.

Offensive coordinator and run-game connoisseur Mike McDaniel is the favorite to land the Miami Dolphins head coaching job according to BetOnline.ag. Sure – Kyle Shanahan is the mastermind, but McDaniel will certainly be a big loss.

The NFL head coaching carousel is set to continue on today, and 49ers OC Mike McDaniel is the favorite to land the #Dolphins job according to @betonline_ag 💰

On top of potentially losing McDaniel, quarterback Jimmy Garoppolo has probably played his last down as the 49ers signal caller. The team sent three first-round picks to the Dolphins last April for the right to draft Trey Lance, and they’re not going to just let him hang by the wayside and sit on the bench during his cheap rookie contract.

Garoppolo can still play in this league, and you can bet on who will be Jimmy G’s next team with our exclusive wagering partner BetOnline.ag. Here are the odds to be his new home:

Jimmy Garoppolo Next Team (If Not 49ers)

Pittsburgh feels like a perfect landing spot for Jimmy. They have a solid group of young players and were just decent quarterback play away from being contenders last season. Big Ben was bringing them down. They have stability at head coach, and Jimmy could be an excellent bridge for a team that isn’t ready for a complete rebuild yet.

The Raiders are also something to think about. Former Patriots offensive coordinator Josh McDaniels accepted the Las Vegas head coaching job over the weekend, and he coached Jimmy in New England for several years. Sure – we can all agree that Derek Carr is better than Garoppolo, but McDaniels (much like Belichick) loves to zig when everybody else zags, so maybe he does something to shuffle the QB room.

The longshots on BetOnline’s board (Packers, Texans, Browns, Colts) don’t make any sense to me. Though their quarterback situations may all be in limbo, bringing Jimmy in doesn’t really fix anything. He is either too expensive for these teams or doesn’t fit into what they’re looking to do.

The interesting one is the Buccaneers. With Tom Brady set to retire, Tampa Bay will be looking for a quarterback to round out their mostly-complete roster. What a story that would be: Jimmy Garoppolo finally takes over for Tom Brady.

We’ll see what happens, but make no mistakes – Garoppolo is top 32 and deserves a starting job.