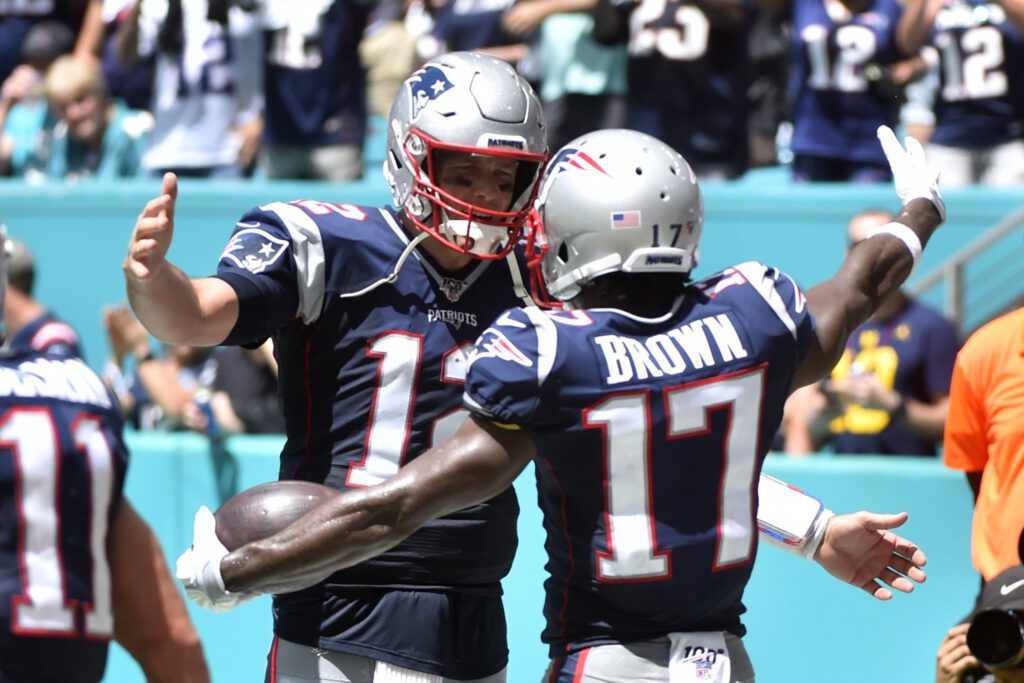 MIAMI GARDENS, Fla — after a long year and countless reminders, the Patriots finally got their revenge for the Miami Miracle with a 43-0 shutout of the Miami Dolphins at Hard Rock Stadium.

After three quarters, the Patriots had 23-0 lead, and the Dolphins had managed only 38 yards of total offense and two first downs.

In the fourth quarter, the Miami offense ruined all the statistical fun with some late production but had back-to-back drives end in pick-sixes for New England to put the game on ice.

For Bill Belichick’s team, the Dolphins were a joke of an opponent that we should already slot into the number one pick in next April’s draft.

But the on-field chemistry for the Patriots continues to build, which will pay dividends once the competition gets stiffer later in the season.

Here are ten things we learned as New England improves to 2-0 on the season:

The biggest takeaway from Sunday’s win was Antonio Brown’s 24 snaps resulting in four catches on eight targets for 56 yards and a touchdown.

We’ll get to some of the tape soon, but the variety that we saw from the seven-time Pro Bowler was impressive. Despite only one week of prep, Brown ran routes from all over the formation both inside and outside. He ran crossers, seams, jerk routes, fades, slants and even took a jet sweep handoff right out of the gate.

The expectation here was that Brown’s talent would shine regardless of his knowledge of the playbook, but I’m impressed with how much he has absorbed already. Kudos to Troy Brown and the Pats coaching staff for getting him up to speed. Now to the film.

The first play we’ll look at is the 20-yard touchdown grab in the second quarter. On the play, the Patriots unveiled their version of the death lineup with Brown, Julian Edelman, Josh Gordon, Phillip Dorsett and James White as the five receivers for Brady. Brown is working out of the left slot with Gordon next to him. He gets himself on Dolphins corner Jomal Wiltz’s outside hip, turns his head back to locate the ball and fights through Wiltz’s coverage to high-point the ball for the score. Brown’s work at the catch point and strong hands are truly underrated.

The touchdown was pretty, but the chemistry between Brown and Brown is still a work in progress.

Here, Brown is in a similar situation. He’s working out of the right slot this time and runs the same fade route as before. However, Brown continues upfield when he gets on top of Witlz’s coverage instead of looking for the back shoulder. Brady attempts the same back-shoulder throw, but Brown isn’t looking for it this time.

A few plays later, Brown and Brady almost connect again for a touchdown, but Brady underthrew the pass. Still, you see the quickness at the line of scrimmage from Brown as he dusts old friend Eric Rowe with a hesitation release and burns him over the top.

Patriots offensive coordinator Josh McDaniels gave us a little taste of things to come on Sunday, and the sky is the limit.

Over the last five seasons, I’ve studied tape of some of the best defenses in the NFL. The chemistry and soundness that we’ve seen in the first two weeks from the Patriots defense is as good as it gets. Period. It’s 11 parts moving as one to execute the game plan and force opposing offenses to beat them with multiple terrific individual plays because they aren’t giving yards away.

The mantra around the Patriots locker room is to play unselfish football, so I asked the units best player, cornerback Stephon Gilmore, what “unselfish” means to him.

“Playing for each other, whatever it takes. Whatever position you need to get put in sometimes it isn’t best for us individually, but we do it for our team to help each other out,” he said.

Gilmore’s running mate Duron Harmon added, “we are at a good spot for sure right now, but I said this last week, and I’ll say it this week, it’s still early. We still got so much we can improve on, and we need to continue to have the same mindset; go out there and work hard.”

My film review this week will focus on showing you all what 11 parts moving as one looks like on tape.

One of the few negatives from Sunday’s win was another injury to starting left tackle Isaiah Wynn. Wynn left the game in the first quarter with a foot injury, and no, we don’t know which foot yet.

The Patriots were already starting backup right tackle Marshall Newhouse and backup center Ted Karras. With the injury to Wynn, fourth-stringer Korey Cunningham had to step in for most of the game.

Newhouse and Cunningham performed admirably on initial viewing given the circumstances. Both players joined the team in the last few weeks, and despite little preparation or time in the system, they held it together.

Plus, Cunningham admitted he didn’t expect to play much and then ended up playing 59 snaps in the win. He did add that he’s starting to feel at home in New England.

As for Newhouse, he shockingly told me that he already feels comfortable with 80 percent of the Patriots playbook saying that over his nine seasons, he has seen almost everything on a football field. The hardest part of the game for him was switching from right tackle to left tackle mid-game.

On review, things will probably turn out somewhat ugly for the two Pats tackles, but they got the job done.

On the stat sheet, seven sacks look great for the defense, but six of those came in the second half. Rushing the quarterback is much easier with a lead and those sacks piled up late in the game. With that said, there were bright spots, led by defensive tackle Adam Butler.

Butler had an excellent performance against the Dolphins starting with his first-quarter sack.

The initial pressure put on Fitzpatrick comes from rookie Chase Winovich. Dolphins left tackle Jesse Davis is slow off the ball, and Winovich blows by him forcing Fitzpatrick to step up in the pocket. Butler works with Dont’ a Hightower on an interior twist wrapping around Hightower’s penetration to swarm the Dolphins QB as he tries to escape Winovich.

Later on, Butler made another play to get the Patriots defense off the field on third down. The Pats D-Tackle told me the key to batting passes is knowing the internal clock for a quarterback. On third and four, he said, you know the ball is coming out quickly, so he got his hands up after his initial rush was stalled to knock the pass down at the line.

Butler has quietly become a force as an interior pass rusher for the Patriots.

5. Tom Brady’s 20th Season is Off to a Great Start

Believe it or not, the six-time Super Bowl champ thought his performance against the Steelers last week was just okay. Brady said after the game that he could’ve played better against Pittsburgh.

Well, he probably felt the same way after missing the touchdown throw to Brown in the second half, but he was still pretty darn good finishing 20-28 for 264 yards and two touchdowns.

Brady’s best throw came late in the fourth quarter when it was a little surprising to see him dropping back to pass. Pats running back Rex Burkhead ran a slot fade with Brady in the gun out of an empty set. Burkhead got half a step on Baker, and Brady dropped a touch-throw dime to his running back for a 32-yard completion.

With all these weapons around him, Brady is off to a great start and has a chance to put together one of his best statistical seasons.

The Patriots opened Sunday’s game in a traditional 3-4 look with four true linebackers on the field: Dont’ a Hightower, Kyle Van Noy, Jamie Collins and Elandon Roberts. The four Pats linebackers set a physical tone in the first quarter that the Miami front wasn’t a match for, starting with a tackle for loss by Jamie Collins.

On the play, the Dolphins ran a jet sweep to jitterbug receiver Jakeem Grant. Miami tight end Nick O’Leary was supposed to block Collins on the edge but seemed confused about his assignment. Collins took advantage and dropped Grant for a four-yard loss.

The Patriots didn’t show off their linebacker depth against the Steelers because Pittsburgh played most of the game in three-receiver sets, and Kyle Van Noy was inactive, but we got to see it this week.

After they ran 23 plays out of 20-personnel last week, the Patriots only used the personnel grouping twice against the Dolphins. The Patriots went with a more traditional approach using 11-personnel on 57 percent of their offensive plays and 21-personnel on 34 percent. Last season, those were New England’s two most common groupings on offense. We’ll probably see the two running back sets throughout the season, but it wasn’t a big day for those in Miami.

8. How Worried Should We Be About Stephen Gostkowski?

It was not a good day for the Patriots kicker. Gostkowski missed a 48-yard field goal and two extra points after making all seven kicks in Week 1. On the one hand, everyone has a bad game. But on the other hand, kickers are headcases, and you always worry that a bad day will turn into a bad month or a bad season. Ultimately, the veteran is still the Patriots’ best option this season; there isn’t a better replacement out there right now. The Patriots are rolling with Gostkowski, so we’ll all have to live with the results.

When the game was somewhat competitive, the Patriots were able to run the ball despite playing three backups on the offensive line.

McDaniels also experimented with running lead back Sony Michel out of more three-receiver looks, which is what I’ve been waiting for since it means fewer stacked boxes.

On this ten-yard run, the Patriots are in 11 personnel with Michel as the lone player in the backfield, and the Dolphins respond with only six in the box, something that favors New England. The Pats ran a split-zone action with outside zone to the right from the OL and the tight end performing a “sift” block coming across the formation. Michel does an excellent job of pressing the run inside. By angling inside, you can see #56 Davon Godchaux and #55 Jerome Baker establish inside positioning. With his blocks set up, Michel cuts to his left where Wynn and tight end Matt LaCosse use the flow of the defense against them to set up their blocks.

The Patriots still have a ways to go with the running game, and the injuries along the offensive line won’t help matters, but there were some positive developments on Sunday.

On his conference call last week, Belichick said that Karras’s errant snaps were one of many areas where the team could improve moving forward. On Sunday afternoon, it felt like Karras did improve after a shaky start in the opener. There were a few times where Brady was calling for Karras to snap the ball but the floaters and off-target snaps we saw last week were few and far between this week. Karras is starting to look comfortable in the middle of the Pats OL.