Previewing and predicting the 2021 Turkey Day games, powered by BetOnline.ag. 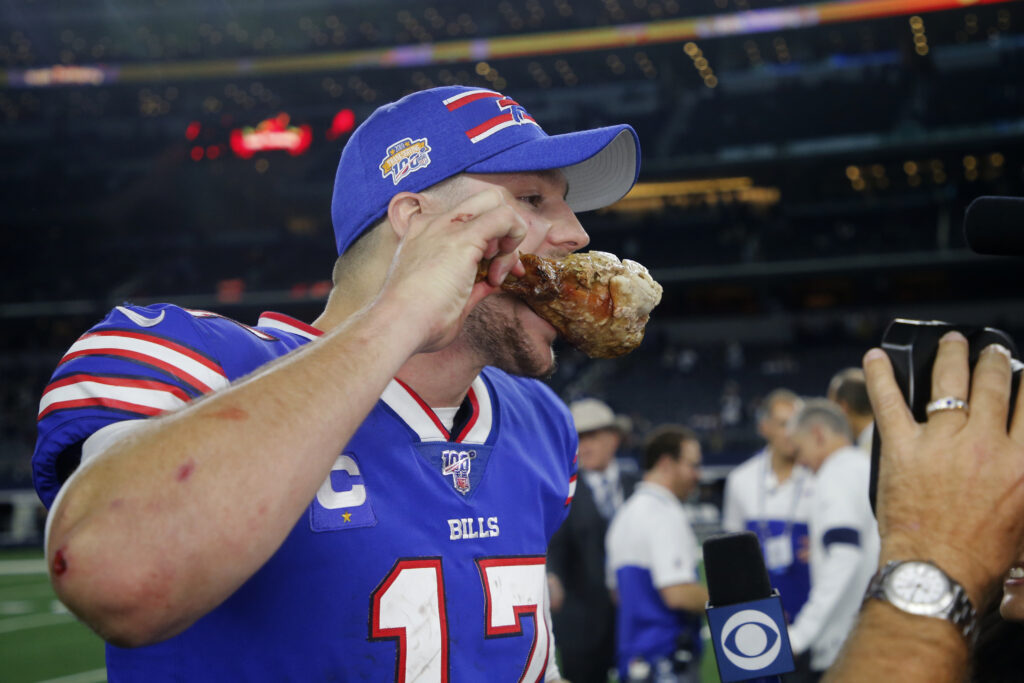 Buffalo Bills quarterback Josh Allen takes a bite out of a turkey leg as he participates in a broadcast interview after an NFL football game against the Dallas Cowboys in Arlington, Texas, Thursday, Nov. 28, 2019. (AP Photo/Michael Ainsworth)
Share
Facebook Twitter Email

It sounds cliché, but there really is nothing better than Thanksgiving Day football. Time with family, great food, and NFL football from just after noontime until 11pm. You know what can make it even better? Having some action on the games using BetOnline.

The Bears, Lions, Raiders, Cowboys, Bills, and Saints all lost on Sunday – so we should get some barnburners with everyone trying to get off the schneid going into their mini-byes.

That being said, with three games to watch while you eat your turkey and pie – here are my previews and predictions for Thursday, brought to you by BetOnline.ag:

Just as I start talking about how great Thanksgiving football is, we get to preview Bears vs. Lions! Both of these teams have been… interesting to watch this season, to say the least. The Bears couldn’t even squeak past the Lamar-less Ravens, and the Lions couldn’t get by the banged up Browns.

tune in on cbs! pic.twitter.com/WUWjXe2CTq

Detroit should get Jared Goff back this week with hopes of getting their first win, and there may not be a better way to do so than with the Bears coming to town – who have lost their last five games. Head coach Matt Nagy’s career in Chicago is a ticking time bomb, and if they can’t get past the winless Lions he may end Thanksgiving weekend unemployed.

Regardless of this game not being terribly exciting, 12:30pm kickoffs from Ford Field as you’re getting ready for Turkey Day are always nostalgic. More often than not we get an electric game in Detroit, and with Goff coming back and the Bears gasping for air, I think the Lions get their first win of 2021.

Both Dallas and Vegas struggled mightily to put up points on Sunday, scoring 9 and 13 respectively. The Cowboys offense has been very hot and cold lately, scoring 43 points against Atlanta in between two stinkers against Denver and Kansas City. Dak Prescott threw for just 216 yards and turned the ball over three times in the loss.

The Raiders coming to town should be the perfect matchup for Kellen Moore to get the Cowboys wheels turning again, as Vegas has let up 96 points over their last three games. Their offense has also been suspect lately, as they’re scored over 20 points just once since losing Henry Ruggs.

The Cowboys are fighting for seeding in the NFC, while the Raiders are just trying to stay afloat. Dallas gets back to their winning ways and dominates Vegas at home. Cowboys win and cover.

The Bills lost first place in the AFC East over the weekend after getting dismantled by the Colts 41-15 on their home turf. Buffalo’s defense had no answer for Jonathan Taylor and his five touchdowns, and their offense did them no favors with four total turnovers.

Turns out Jonathan Taylor the receiver is also really good.

New Orleans also got their doors blown off this weekend, losing 40-29 to the Eagles in what was much more lopsided than the final score would tell you. Jalen Hurts rushed for three touchdowns, and the Saints were down 33-7 before putting up 21 in the fourth quarter to make the game look respectable. The Saints fell to .500, but are still holding onto the NFC’s 7-seed by a thread. Every game is a must win from here on out.

No team needs a win more than the Bills right now, and I think they get one in New Orleans. Josh Allen proved in Dallas two years ago that no lights are two bright for him – even on Thanksgiving. The Saints have been relatively promising, but Trevor Siemian doesn’t seem like a Turkey Day winner to me. Bills get back on track in style.