We take a look around the league at three games to watch, powered by BetOnline.ag. 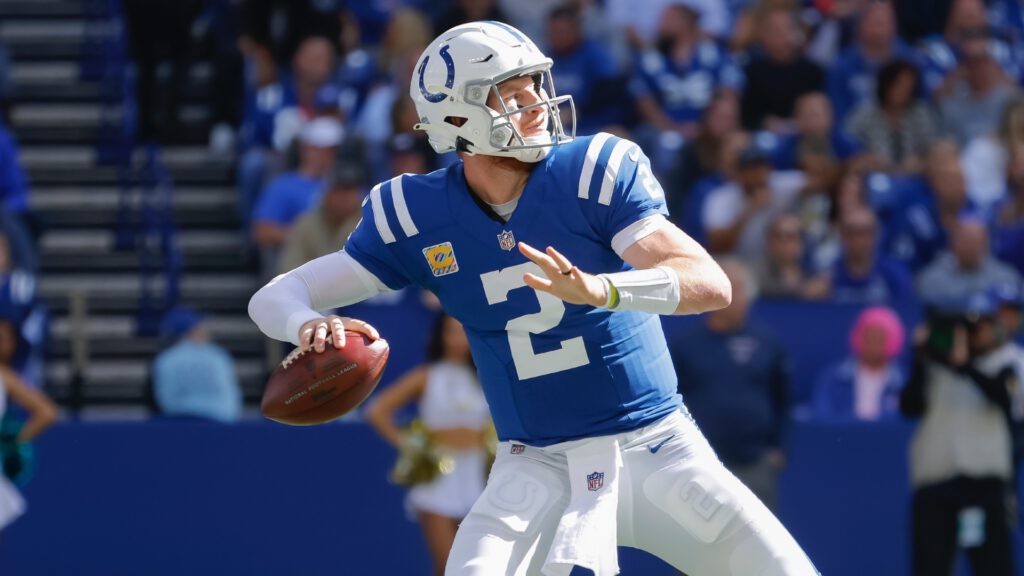 We once again had a relatively boring Thursday Night Football game, as the Patriots went down to Atlanta and smoked the Falcons 25-0. Mac Jones continues to impress and is putting together a solid Rookie of the Year campaign, and the team as a whole is starting to make noise in the Super Bowl conversation.

We have plenty more football to go this weekend, so as is routine – here are my three games to watch on Sunday, courtesy of our exclusive wagering partner BetOnline.ag:

This is one of those games that is going to show us what both teams are made of. The Colts sit at 5-5 and are in second place in the AFC South. After a brutal stretch to start the season, Indy is 4-1 in their last five, with their only loss coming to the first place Titans. Carson Wentz is playing solid football for the first time in a while with 17 TDs and just 3 INT, and Jonathan Taylor leads the NFL in rushing with 937 yards.

Meanwhile, the Bills lead the AFC East at 6-3 and are coming off of a massive 45-17 win against the Jets. Quarterback Josh Allen is currently the MVP favorite at (+250) according to BetOnline.ag. Allen has 2,602 passing yards on the season and 19 passing touchdowns. He also has 322 yards on the ground and three rushing touchdowns. Buffalo is well equipped to be a good team for a while with Allen under center.

I think the Bills and Patriots are going to fight tooth and nail for the rest of the season for the top spot in the AFC East. Because of this, they’re not going to let up for the rest of the season and have to show New England who the new boss is. Indy has been competitive this year, but I think going up to Buffalo will be too much for Wentz and the Colts. Bills win and cover.

We have yet another battle of injured quarterbacks as the Cardinals travel to Seattle this weekend. Cardinals signal caller Kyler Murray has missed the teams last two games with an ankle injury, and is currently questionable for Sunday. According to head coach Kliff Kingsbury, the third year quarterback will be a game time decision.

Seattle is 3-6 this season and is struggling to get anything going. Russell Wilson played in his first game since the beginning of October on Sunday, but struggled mightily. He completed just 50% of his passes and thew two interceptions in a 17-0 loss to the Packers.

Russell Wilson and the Seahawks are going to be out for revenge after being shut out for the first time in Wilson’s illustrious career last weekend. I have a hard time he’ll ever let that happen again. That being said, getting Kyler Murray back can be huge for the Cardinals and I think it puts them over the hump in this one. Arizona gets their mojo back on the road. NOTE: this is only a play if Murray suits up. If Murray is OUT, I am not counting the side or the total.

UPDATE: Kyler Murray will NOT play today, and Colt McCoy will start at quarterback for the Cardinals. I don’t like playing a side here, but I do like the UNDER at 46.

Dallas and Kansas City are two high powered offenses coming off MASSIVE wins on Sunday. Dallas beat Atlanta 43-3 and got themselves to 7-2 on the season. Dak Prescott is back to being healthy, and CeeDee Lamb is proving to have been a steal for the Cowboys as the 17th pick of the 2020 NFL Draft.  He had six catches for 94 yards and two touchdowns in Sunday’s win.

The Chiefs went on the road last weekend and got their swagger back in Vegas against the Raiders. Patrick Mahomes threw for 406 yards and five touchdowns, and had zero turnovers for the first time since week one. If Kansas City can stay this hot, it might be a disaster for the once wide open AFC.

Both Dallas and Kansas City will continue the point scoring this week, and I think the total goes over. I also think the Chiefs might have gotten Mahomes back in a groove, which is dangerous for the rest of the league. Chiefs win and cover to get their third win in a row.