The Patriots travel to Minnesota for a Thanksgiving night matchup against the 8-2 Vikings. 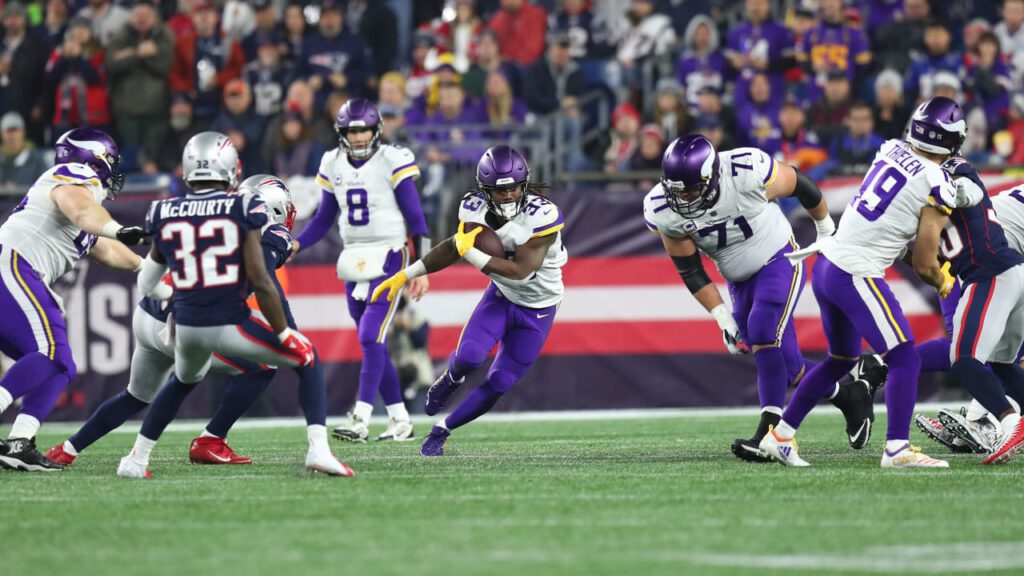 The Patriots and the Vikings are coming off of polar opposite Sundays. New England won an incredibly boring 10-3 matchup thanks to a punt return TD by Marcus Jones as time expired, while Minnesota got their doors blown off at home 40-3 by the Tony Pollard-led Dallas Cowboys.

Neither team has time to celebrate or sulk, as they’re right back at it this coming Thanksgiving night. The Patriots will take on the Vikings from Minnesota on Thursday at 8:20pm, with Mike Tirico, Tony Dungy, and Jason Garrett on the call for NBC.

Here are their odds for the Turkey Day game, thanks to our exclusive wagering partners at BetOnline.ag:

The last time the Patriots played on Thanksgiving was the infamous Butt Fumble game against the Jets in 2012. 10 years ago to the day, New England beat New York 49-19 and improved to 7-3 on the season, while also securing one of the funniest plays in NFL history when quarterback Mark Sanchez ran into his center’s backside and fumbled the ball because of it.

But it’s 2022 now, and the 6-4 Patriots will have their work cut out for them on Thursday. The Vikings are 8-2 and despite coming off of a brutal loss to Dallas this week, have shown that they can compete with the best of them in the NFL this year. Kirk Cousins has played well (at least in the 1pm window), Justin Jefferson has dominated opposing secondaries, and Kevin O’Connell has completely rejuvenated a team that felt stale for years under Mike Zimmer.

The Patriots got some bad news after their win against the Jets as center David Andrews could miss the rest of the season with a thigh injury.

An offensive line that continues to struggle will now turn to 33-year-old James Ferentz to be the man in the middle. Ferentz himself has been fine when called upon this season, but the trickle-down effect along the line when not having Andrews in the middle has been significant. He’ll need to make others, like Cole Strange, better down the stretch.

Kyle Dugger continues to prove that he’s one of the top safeties in the NFL. His seven tackles and sack against the Jets on Sunday were sensational, but his stuff of Michael Carter on 3rd and 1 at the end of the fourth quarter set up the play of the game for New England.

Dugger is always in the right place at the right time. He’d be a complete Pro Bowl snub if he isn’t elected this year.

The Patriots fourth-round cornerback started off his rookie campaign incredibly strong, but we haven’t really seen much from him over the last several weeks. Jones played just 17 snaps on Sunday against the Jets – his lowest since New England’s season opener.

The Vikings have a loaded wide receiver room, and the Pats will have to be their very best if they want to have success on Thanksgiving. My eyes will be on the rookie, and more specifically how exactly they use him.

Speaking of a loaded WR room, Justin Jefferson is arguably the best wide receiver in the NFL. The third-year pro out of LSU has 72 catches for 1,093 yards through ten games in 2022 and has seamlessly filled the void left by Stefon Diggs in the Minnesota offense.

New England will need all hands on deck in the secondary to make sure Jefferson doesn’t beat them – something he could do singlehandedly.

He’s been overshadowed by the likes of Matthew Judon and Micah Parsons in 2022, but the former Packer linebacker is having a year for himself with the Vikings.

Smith has paced Minnesota’s defense to the tune of 23.1 points per game allowed thanks to his 9.5 sacks and team-leading 14 tackles for loss. New England’s depleted offensive line will need to keep their eyes wide open for Smith on Thursday.

After winning six of their last seven games, I think New England will drop this one on Thanksgiving.

The Vikings will be hungry after their embarrassing loss to Dallas, and the Patriots still have no answers offensively. I think they’ll manage something, but Justin Jefferson and the Vikings offense will be too much in the end.

Vikings win and cover, and the total goes over 43.